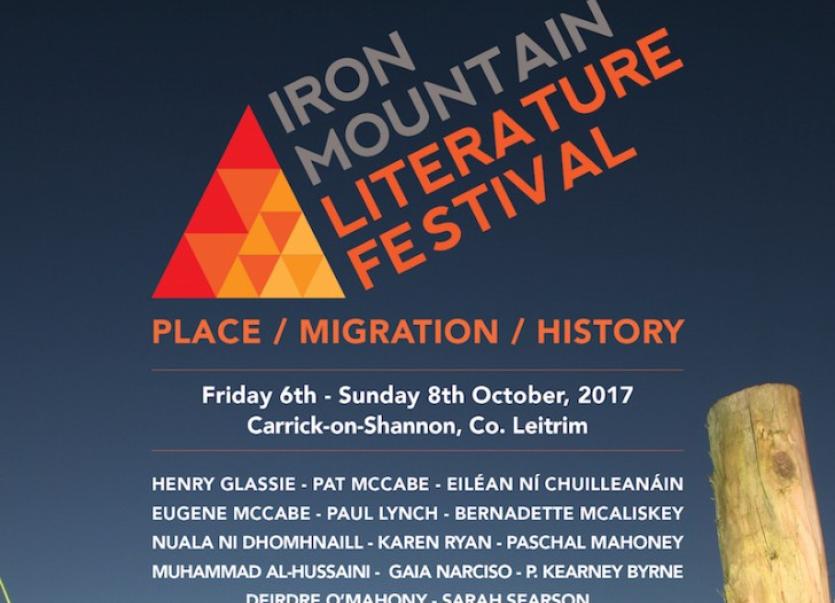 Celebrated American writer and folklorist Henry Glassie, King of the Castle author Eugene McCabe and Ireland Professor of Poetry Eileán Ní Chuilleanáin are among those taking part in the second Iron Mountain Literature Festival in Leitrim from October 6-8.

Themes of place, migration and history will be to the fore in a gathering of writers, activists and musicians – novelist Pat McCabe, migrant rights campaigner Bernadette Devlin McAliskey and London Imam and sean-nós singer Muhammad Al-Hussaini among the participants at the festival in Carrick-on- Shannon.

Henry Glassie’s books include his celebrated writings on life and people in Fermanagh (All Silver and No Brass, Passing the Time in Ballymenone) and studies of traditional arts and culture in Turkey, Bangladesh, Brazil and Nigeria.

Glassie is a renowned speaker and his talk ‘Passing Time, Place and Borders, Old and New’ on Friday October 6 presents his insights on language, culture and migration in Ireland and elsewhere in the world.

McCabe (author of The Butcher Boy and Breakfast on Pluto) will read from his work on Saturday and join Glassie, Bernadette McAliskey and Nuala Ní Dhomhnaill to discuss issues of border identities, language and literature.

Arising from the John McGahern seminar which ran from 2007 for eight years, the Iron Mountain Literature Festival was established in 2016, reframed in a wider context involving writers, artists and thinkers from many perspectives.

In the context of the Dock’s current exhibition Thinking Living Dwelling, Vincent Woods chairs a talk about architecture and the built landscape as a reflection of place and home with Dock director Sarah Searson, Henry Glassie, architect Pascal Mahoney and curator and visual artist Deirdre O'Mahony.
Also as part of the exhibition, earlier on Friday 6, Selina Guinness hosts a workshop for writers entitled Field Notes: thinking in spaces and writing in places.

Famine memory will be marked by a number of events: The exhibits at the Carrick on Shannon Workhouse Attic Memorial describe the history of 19th century building, transcripts of workhouse day books and an evocative video work by artist Alanna O’Kelly.

Before a guided visit, Paschal Mahoney will discuss the architecture of the workhouse in Ireland, while Trinity College Economics lecturer Gaia Narciso traces the links between the economic and social impact of the Great Famine and subsequent acts of political rebellion. Paul Lynch will read from his new novel Grace, set in Famine Ireland, and praised by Edna O’Brien as ‘a beautifully written novel with a haunting story and deep echoes of the ancients’.

The Iron Mountain festival hosts the first visit to Leitrim of London Imam Muhammad Al-Hussaini, who sings sean-nós song and is a fellow in Islamic Studies at the Westminster Institute in London.
He is joined in concert by his teacher and music mentor, fiddle player Karen Ryan, Director of the Return to Camden Town festival and a host of Leitrim musicians.

As part of the festival Finola Armstrong, Cathaoirleach, Leitrim County Council will present the John
McGahern Award which supports new writing and recognises the exceptional contribution of John McGahern to literature, and to Leitrim. The festival finishes on Sunday afternoon with music and poetry in Skerry Rynn’s, Ballinaglera.

For further information and to book contact the Dock on (071) 96 50828 or go to
www.ironmountainfestival.ie.