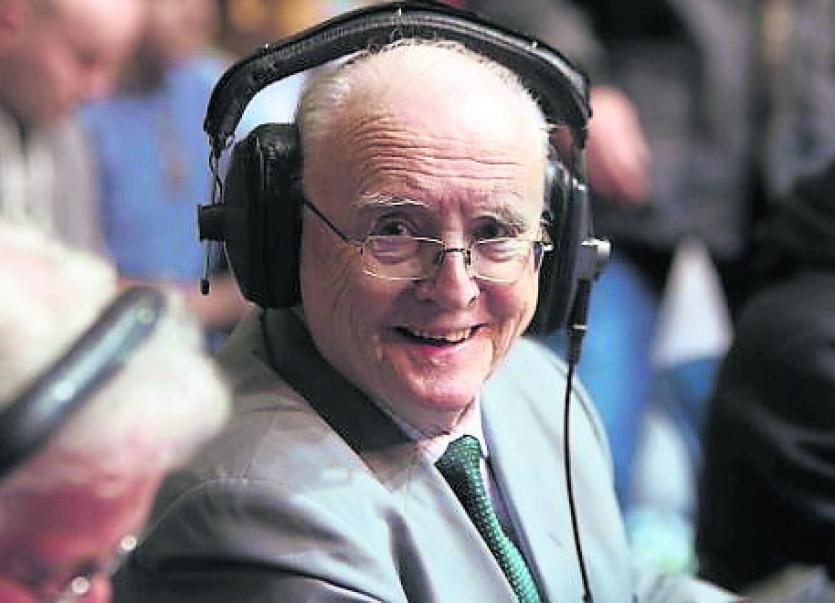 Local Cloone man Andy McGovern has suffered from Motor Neuron Disease for many years and wrote a book 'Against the Odds' (one of two books he wrote) outlining his life since his diagnosis which also saw an involvement by the late Jimmy McGee.
One man who could relate to Andy was the Memory Man who, in the foreword of Andy's book, tells of the trauma he suffered while watching his son Paul die from motor neuron disease.
Jimmy was also a Patron of the Irish Motor Neurone Disease Association.
As we remember the man whose voice was synonymous with sport, as he covered 12 World Cups and 12 Olympic Games, we also recall the words he wrote in 'Against the Odds':
“My eldest son, Paul McGee, passed away from motor neuron disease in May 2008, at the age of fifty-one. His deterioration was rapid: in succession he lost the use of his arms, legs, feet, hands and voice, until, for the last five months of his life, he couldn't speak, couldn't shake his head, couldn't point a finger.
“The only thing he could do was smile. I will always remember him for his smile. If you told him a story that he thought reasonable funny he would smile. If you asked him a question and the answer was, 'Yes', he would smile. He had no way of communicating, 'No'.
“It's not life's natural order to have your children predeceased you. In Paul's case it was particularly difficult to understand because for his whole life he had been an enthusiast, sportsman, engaging in running, bowling, football and golf, all to a relatively high standard.
“ This required dedication, strength and fitness, yet after a year and five months of living with MND, he was gone. During his time with the condition Paul and indeed the rest of our family had many questions. The Irish Motor Neurone Disease Association. (IMNDA) become the first point of contact for a lot of these queries, as well as for practical and emotional support.
“Paul's battle with this relentless disease showed us, his family and friends, the true meaning of the strength of the human spirit. The same quality, over a much longer period of time, is evident in every page of Andy McGovern's memoir, Against the Odds.
“Paul knew that there was no cure for motor neuron disease and that there certainly would not be one in his time. While he was still able to speak, he decided to bequeath his brain to Beaumont Hospital for MND research. I would love to see it playing a part in achieving a breakthrough for this terminal condition.
“ For me, this would be the greatest legacy that any of my family could leave the world.
“Like Paul, my father died prematurely and my wife Marie died at the age of fifty-four, but as Andy McGovern demonstrates time and again in, Against the Odds, the best antidote to loss – whether the loss of a loved one or, in Andy's case, the loss of the use of his arms and hands that provided a living for his wife and six children – is what I call 'the glass half full' attitude. Andy lists all the things he can do, not those he can't, when he writes: I can smile to brighten someone's day. I can laugh. I can think. I can write. I can read. I can drink Guinness through a straw – it tastes the same. I can enjoy fun. I can love. The list is endless.'
“And he has proven not once but twice that he can, with the help of technology, write a book.
“Since I first met Andy, through the IMNDA, I have considered him as an inspirational.”
Rest In Peace Jimmy.