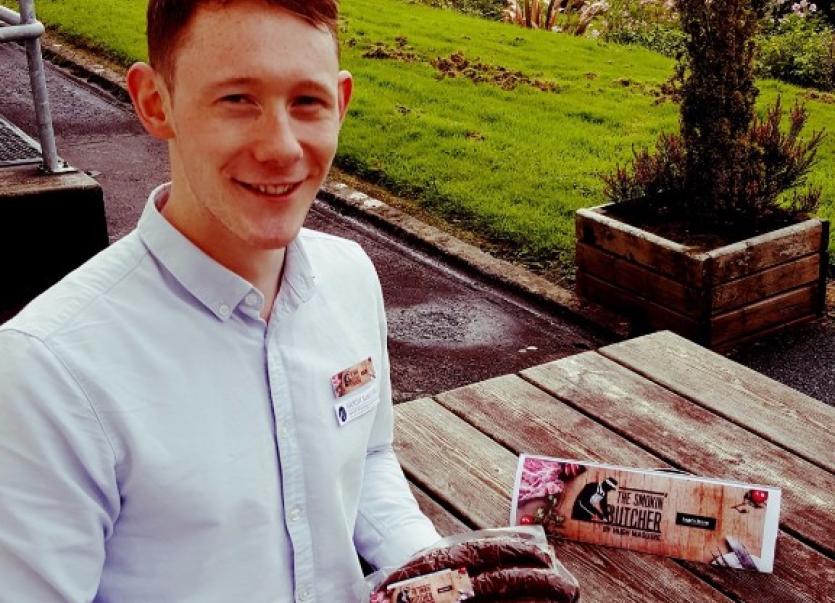 St. Angela’s student, Hugh Maguire and his father (also Hugh Maguire) won the top prize at the Great Taste Awards in London this month, for their Smoked Black Pudding. Hugh helped his father develop the product in their shop ‘The Smokin’ Butcher’ in Ashbourne, Co. Meath.

Hugh, a 4th year student on the B. Applied Science Food and Business Management programme, made the sample that was sent over to London for tasting at the awards.  The fact that he is still an undergraduate didn’t phase him. ‘I've been surrounded by food all my life’ he said. ‘I used to cure bacon (salting pork to make rashers) on Sundays when I was five years old and I've been working in my family butchers since I was ten. Every mid-term, every Saturday, every holiday I was in the shop’.

Hugh spent many summers working in different jobs, all in the food industry; Irish Country Meats, Neven Maguire's MacNean House and Restaurant, the canteen in Facebook HQ, and he even spent a summer Italy, in a small village called Fossoli, working and living with a butcher, who he rates really highly. After finishing a higher certificate in culinary arts, Hugh realised that he didn't want to be a chef. ‘My father has prided himself on his homemade sausages and puddings, it is the cornerstone of the business, so I looked for a way to help me expand into more than a butcher shop and start production’.

‘I did some research and decided on the Bachelor of Applied Science in Food Science and Business Management at St. Angela’s. The course covers every aspect of the food game, so it was a no brainer for me to come here. My time in St. Angela's has given me copious knowledge of every side of food and it has really set me up to one day owning and running my own food business. And in 3rd year, you get to go out on work placement.’

Hugh spent January to May on Hogan’s Farms last year. ‘It was a very well-run turkey production factory and it was my first time seeing packaging, loading and distribution, so I learned a lot on that side of things’.

The Maguire family have won a lot of awards over the years ‘but this one trumps them all’ said Hugh, ‘It already has had such a huge effect on business. It’s been fantastic!’

One of his lecturers, Roisin Lydon, commented – ‘it is an outstanding achievement for Hugh and the college is so proud of him. We encourage innovation as it helps students to think creatively and we are always pleased to see our students be rewarded for their endeavours.’

Hugh brought the award-winning Smoked Black Pudding into St. Angela’s where his lucky fellow students and lecturers were able to taste the winning product. Lecturer Ronan Mc Art added, ‘this was an amazing success story for Hugh and great inspiration for our other students, showing how passion and belief in your food product can lead to success on an international level.’