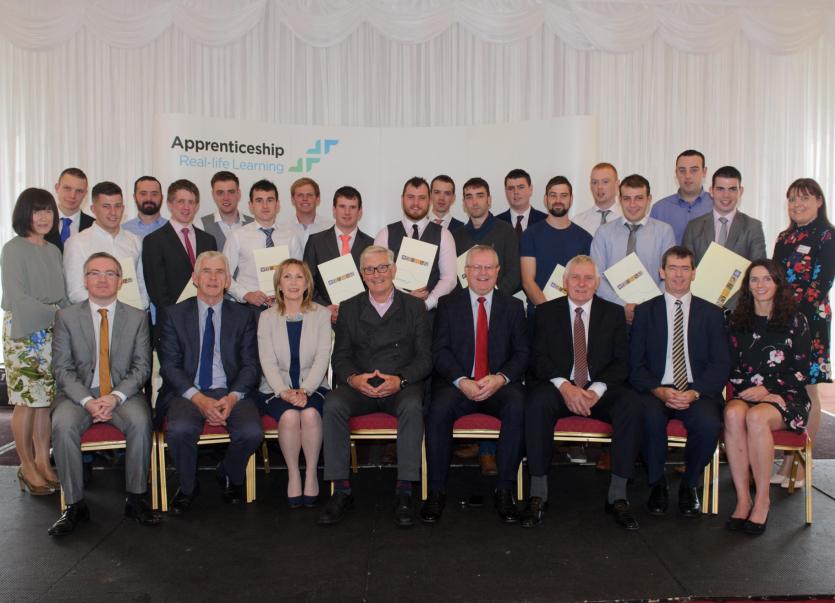 Apprentices from Leitrim, Sligo and Mayo who received their Advanced Certificate Craft on the successful completion of the apprenticeships.

Graduating apprentices from Leitrim, Donegal, Galway, Roscommon, Mayo and Sligo who recently completed their apprenticeship were recently presented with their Advanced Certificate Craft.

The Advanced Certificate Craft is at Level 6 of the National Framework of Qualifications and is an internationally recognised qualification.

The event was co-hosted by SOLAS, Donegal ETB, Galway and Roscommon ETB and Mayo, Sligo and Leitrim ETB.

Speaking at the presentation, Paul O’Toole, CEO, SOLAS, spoke of the Apprenticeship programme and drew particular attention to the calibre of the Irish apprenticeship system which is recognised nationally and internationally.

“You have completed a comprehensive apprenticeship that is recognised at home and abroad as one of the best in the world. An example of the standards achieved by apprentices during their apprenticeship is the success obtained by the Irish team at successive World Skills Competitions.

“This is a remarkable achievement and it proves beyond doubt that our Apprenticeship system and our apprentices are among the best in the world.”

This October a team of 14 Irish apprentices will travel to Abu Dhabi to compete in the 44th WorldSkills Competition. At the last World Skills Competition held in August 2015 in São Paulo, Brazil, two Gold Medals, eight Medallions of Excellence and an 11th place world ranking were achieved by the team of 14 young apprentices, trainees and students who represented Ireland.

Representing the Education and Training Boards, Anne McHugh, Chief Executive, Donegal ETB congratulated apprentices and acknowledged the hard work and dedication of the apprentices, their families, their employers and the staff in the training centres, who support and work so hard with them during their apprenticeship.