Traitor or Patriot? - the incredible story of Frederick Youell 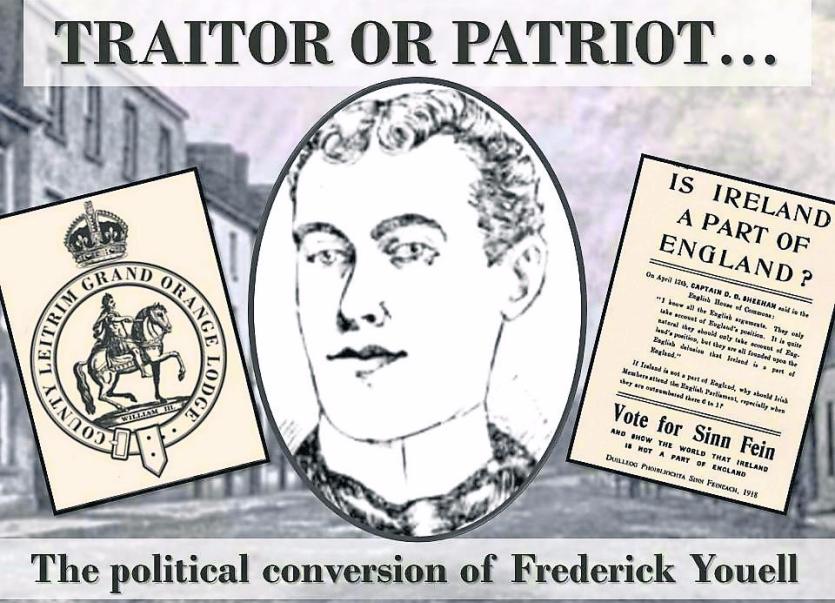 In 1909 Frederick George Youell was the Grand Secretary of County Leitrim Grand Orange Lodge and the Worshipful Master of the flourishing Corgar Loyal Orange Lodge No. 332 based near Ballinamore.
Yet, in the space of a few short years, Orangeism would be expunged from his life and he would be espousing opinions and be involved in organisations anathema to the Orange Institution. Within ten years he would be proclaimed by a Ballinamore Priest as a ‘Protestant Sinn Feiner’.

In the census of 1901 Frederick was recorded as age 30 and an ‘Inspector of Buildings’, but it is apparent from newspaper reports that he soon became involved with his father’s business, with both he and his brother Edgar eventually being the partnership that constituted Ballinamores ‘B. Youell and Sons’. He was significantly prominent in communal standing and respect in Orange circles to become elected to the position of Grand Secretary of the County Leitrim Grand Orange Lodge in 1902, and his presence at Orange gatherings was referenced regularly in newspaper reports of events.

Youell attended his last meeting of the County Grand Orange Lodge of Leitrim on 1st June 1910, when he was still acting as Secretary. A Grand Lodge emergency meeting was held in September 1912 prior to the Ulster Covenant, with, after the main business, the minute ominously ending ‘After some discussion respecting F. Youell, the Lodge was closed’.

In May 1913 he was once again the subject of conversation, with a discussion taking place respecting his conduct towards the Orange Institution in general. A specific crime was remarked on, namely that he had been attending football matches on Sundays!

By 1917 he can be regarded as being a prominent member of Sinn Fein, when at a mass demonstration in Swalinbar he was sufficiently important to have a place on the platform. In 1918 it was Fred who put forward a proposal at Ballinamore Rural Council against the suggested imposition of Conscription to Ireland. The words of his resolution included the ominous phrase that if it were to be enacted that it would ‘inaugurate a new phase in Irish history, the dangers of which no man can foresee’.

As early as 1897 there had been signs that Fred Youell had been willing to be involved in activity perhaps unexpected for an Orangeman. Following the eviction of Mrs Morahan from her shop and premises in Ballinamore, a meeting was held in order to raise funds with the purpose of providing a house for her young family. Fred Youell gave 10s to the cause.

In 1904 Fred and his brother Edgar jointly organised a concert in Ballinamore Courthouse described as ‘An Irish Ireland Concert’, with the pieces performed including ‘The Croppy Boy’, ‘The Rising of the Moon’, ‘God Save Ireland’ and ‘A Nation Once Again’!

There is also evidence of a Fred Youell who in business was single minded, if not ruthless. Several instances exhibiting his approach when it came to financial matters are illustrated via court cases documented in local papers. Among many instances, he sued the Great Northern Railway Company and the Cavan and Leitrim Railway Company no less than 18 times for shortages in deliveries he had received!

Frederick George Youell appears to have died without marrying or issue, and with him died the truth of what motivated his journey between opposite ends of the Leitrim cultural spectrum.

Whether Youell was a deep thinker who slowly made an internal journey from one political position to another helped by disagreements with his fellow orange travellers; or whether he was primarily a businessperson willing to do whatever it took to protect his interests remains unknown. The truth probably is a complex mixture of elements from both.

While the evidence certainly does not label him as a Ballinamore ‘Uncle Tom’, the swiftness of the conversion does challenge the earnestness and sincerity of his actions.

Historian Quincey Dougan is author of ‘Leitrim- A County at War’, and is currently in the final stages of a book on the history of Orangeism in County Leitrim. If you have any additional information on the story of Frederick Youell, or indeed any insights or artefacts relating to Orangeism in the county, contact Quincey at qdougan01@qub.ac.uk or on 4478 356 24221.