UPDATED: Leitrim man among recipients of this year's Bravery Awards 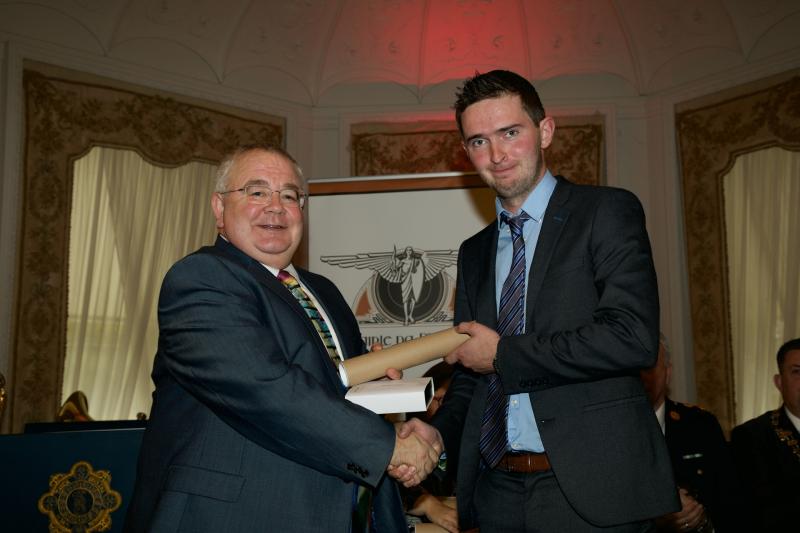 A Co Leitrim man was amongst 15 recipients of awards for Bravery honoured at a special ceremony this morning.

On Saturday 9th July, 2016, at approximately 9 p.m., Mark O’Hara and his girlfriend stopped at John Mullins Petrol Station  in Manorhamilton. Mr O’Hara entered the busy shop where a number of staff were working. As he was queuing near the door he noticed a girl filling her car on the forecourt when suddenly the nozzle and petrol tank caught fire.

Mr O’Hara alerted a member of staff to the fire outside and the extinguisher was passed to him. He immediately ran outside towards the pump and car. People were dispersing and jumping into their cars and fleeing the scene. He proceeded to extinguish the fire with no thought to his own safety. But for his action, the pumps and underground tanks could have exploded if the fire had spread. This may have caused much damage and injury including to the housing apartments and  nursing home which are situated immediately behind the petrol station.

For his efforts Mark O’Hara has been awarded a Bronze Medal and Certificate of Bravery.

In total 15 recipients were honoured by Comhairle na Mire Gaile – the Deeds of Bravery Council – which was established in 1947 to provide for suitable recognition by the State of deeds of bravery.

The Council, which is chaired by the Ceann Comhairle, includes the Cathaoirleach of Seanad Éireann, the Lord Mayor of Dublin, the Lord Mayor of Cork, the Garda Commissioner, the President of the Association of Irish Local Government and the Chairman of the Irish Red Cross.

Congratulating the recipients, Ceann Comhairle Seán Ó’ Fearghaíl, said: “The Bravery Awards are the only such awards made by the Irish State to its citizens and it is fitting that these courageous acts of bravery are acknowledged and celebrated. Today we celebrate the actions of very brave people from every corner of the country, who, through their heroic and courageous acts have helped other people. I am honoured to present Bravery Awards to this year’s recipients.

In particular, we remember the courage and bravery of Caitriona Lucas, a coast guard volunteer who tragically died during a search off the County Clare coast in September 2016. Catriona’s courage and selfless action on that day says everything about her - her strength of character and spirit and willingness to help others. It is also a reminder of how committed and brave members of our emergency services put their lives on the line on a daily basis to help and protect their communities. Caitriona’s family accepted a Gold Medal for Bravery in recognition of her courage, which is the highest award possible.”

“The great sacrifices and acts of bravery made by all of our recipients deserve to be celebrated and recognised and today we thank each of them for their heroism.
Their courage and selflessness are examples to us all. In going to the aid of others at great risk to their own safety, our award winners displayed courage, resolution and determination. They have done themselves, their families, their communities and their country proud and we thank them all."

Caitríona Lucas (R.I.P.) is awarded a Posthumous Gold Medal and Certificate of Bravery.

John McDonnell is awarded a Bronze Medal and Certificate of Bravery.

Eoin Bolger is awarded a Bronze Medal and Certificate of Bravery

Thea Foster-Lee is awarded a Bronze Medal and Certificate of Bravery.

Mark O’Hara is awarded a Bronze Medal and Certificate of Bravery.

Sean Baitson, Philip Byrne, Kyle Corrigan and Cody Ridge Grennelle are each awarded a Bronze Medal and Certificate of Bravery

A number of recipients were also awarded certificates at today’s ceremony. They are:

Darren McMahon is awarded a Certificate of Bravery.

Sergeant John Casey is awarded a Certificate of Bravery