Supporters from all over the word attend Leitrim frackdown party 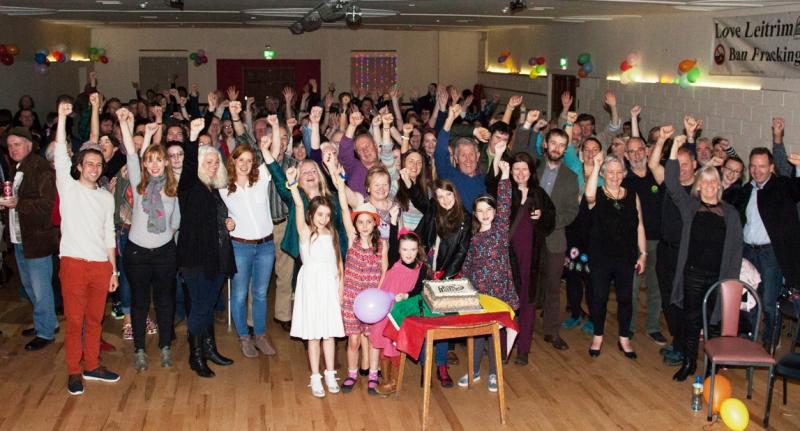 They came from New York & Newtownmanor, Brussels and Belcoo, Thousand Islands and Tawley, Alberta and Aughawillan, Dublin and Dromod, Germany and Glenfarne and all for a great community party to celebrate Ireland’s ban on fracking.

The Rainbow Ballroom of Romance in Glenfarne was the perfect venue, showing the best of Irish hospitality to visitors from near and far. Farmers, activists, homemakers, retirees, mums, dads and kids, up to 300 people, were all on hand for a great night’s entertainment of music, poetry and food.

Local Comhaltas, Kila, Free Speaking Monkey and The Mullies Crowd provided live music while Brian Kerrigans 70’s disco got the Ballroom’s floor shaking. Stephen Murphys heartfelt poetic words were stirring and in keeping with Love Leitrim’s Heart on the Hill which was lit for the occasion.

Speaking on the night Helmut Fehr, a geoscientist from Germany who has supported Ireland in its bid to ban fracking since 2011 said “Now that the chapter on fracking is closed, there is another reason now why me and my wife Andrea will return to Leitrim - then as simple tourists. And that reason is your lovely countryside with its unspoilt nature. And of course it is also the people of Leitrim we have met here since first visiting in 2011”

Love Leitrim members would like to thank everyone who attended the event on Sat 14th Oct, gave of their time voluntarily and supported their fundraising draw and especially the Rainbow Ballroom for hosting the event.

See next week's Leitrim Observer for more on this story.