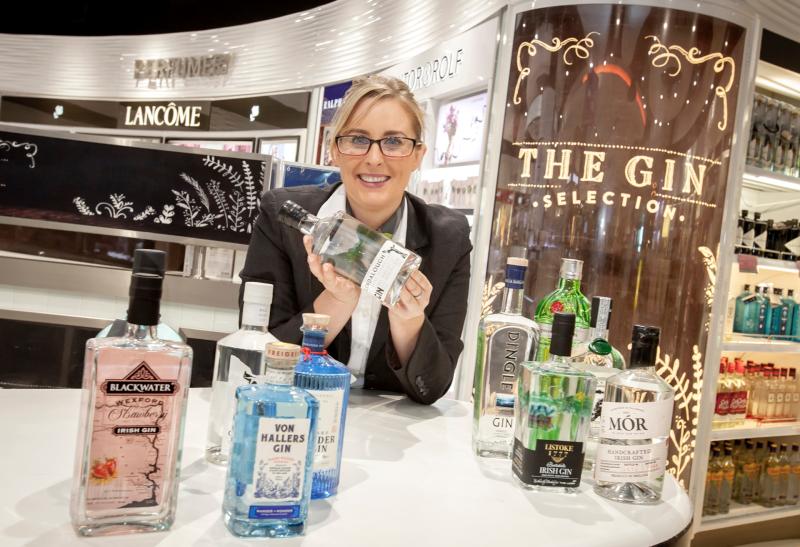 Drumshanbo Gunpowder gin is just one of 26 Irish made gins that showcased at Dublin and Cork airports recently.

The Spirit of Gin Festival, which was aimed at promoting small Irish craft gin producers such as Dingle Gin, generated a 240% increase in Irish gin sales during August and September

The festival ran in August and September in both Dublin and Cork airports and was aimed at showcasing the best of Irish gin alongside the global leaders in the industry.

Since its launch in May 2016, Drumshanbo Gunpowder Irish Gin has proved popular with customer at The Loop. A hand-crafted gin made in the Shed Distillery, overlooking the shores of Lough Allen in the rural village of Drumshanbo, Co. Leitrim, Its stand out blue bottle helps make an immediate impression with customers.

Gin is currently the fastest-growing segment of The Loop’s alcohol range at Dublin and Cork airports and during the festival, The Loop had 11 specially trained gin ambassadors who worked in-store daily to advise on mixes, blends and cocktails and to help customers choose the perfect gin.

“We used the Spirit of Gin Festival to educate consumers about the fantastic range and incredible quality that can now be found in the Irish gin sector,” said Michelle Corbett, Head of Global Consumer Marketing with ARI, which operates The Loop.

More than 50 separate gin brands, including 26 Irish gins, were featured in the festival. Irish gins showcased in the two-month festival also included Glendalough gin from Wicklow, Kinsale Gin from Cork, Ha’penny Gin from Dublin, and Mór Gin from Offaly.

Irish-made gins were the fastest growing segment of the market during the two-month long festival, with total gin sales increasing by 114% during the period, compared to the 240% jump in Irish gin sales.

Over the past two years The Loop has significantly expanded it gin portfolio, and has worked with a wide range of Irish producers to expand the category.

Ireland is now one the world’s top ten gin-drinking nations, according to recent research from Euromonitor International. Irish consumers spent almost €83 million on gin last year, which was an increase of 23% compared with 2015.

A recent study by the Irish Spirits Association, which represents Irish producers, also found that gin was the fastest-growing segment of the spirits market in Ireland last year, as sales increased by almost 32%.