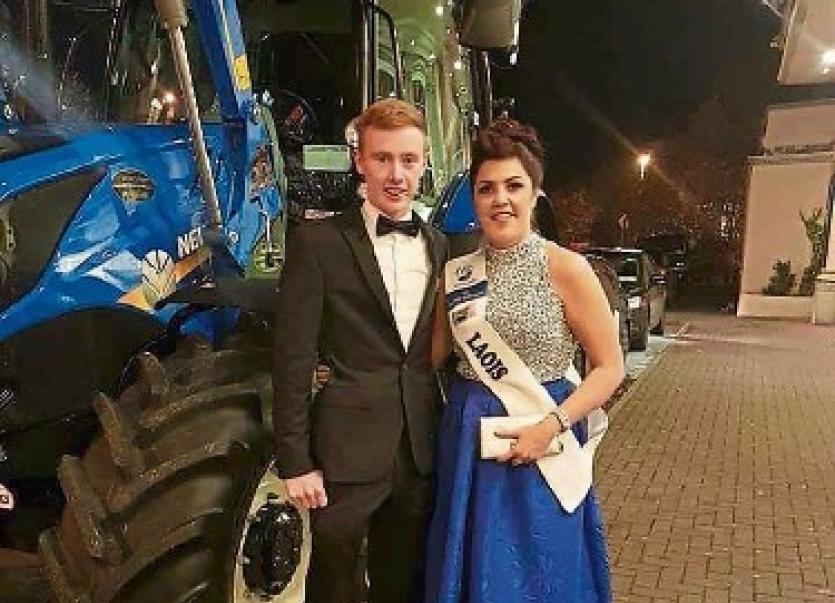 Best Escort of the Year at this year’s W.R. Shaw Queen of the Land Festival was Fergus O’Rourke from Carrigallen. He was the favourite amongst the Queens after they were dazzled by his charm.

Fergus received a weekend stay for two in the Bridge House Hotel and a €300 clothing voucher from Guy Clothing.

The 23 year-old Teagasc Education Officer sealed the deal to become the Best Escort at the festival on the Sunday night at the Gala Banquet along with Emma Birchall from Kilcullen in Kildare who announced as the 53rd WR Shaw Queen of the Land Festival winner for 2017 in the Bridge House Hotel, Tullamore.

The second runner-up was Melissa Glynn from Cranmore outside Athlone in Roscommon and third runner up was Lucy McClymont from Dumfries in the Dumfries and Galloway region in Scotland.

Emma was presented with the W.R. Shaw Queen of the Land Linda O’Brien tiara, the WR Shaw sponsored perpetual trophy, the WR Shaw sponsored €1,000 prize, a specially commissioned piece of Galway Crystal from Cahill Jewellers, a two night break in the Bridge House Hotel and a €200 clothing voucher from Kode Clothing.

Gerard Mahon, Chairperson of the Queen of the Land Festival organising committee, paid tribute to the 31 young women who took part in this year's competition.

He said, “We have had another successful Queen of the Land festival, thanks in no small part to our main sponsors WR Shaw, the associate sponsors, committee and the travelling supporters that came from all over the country and beyond to Tullamore for the weekend.”

Congratulations to Fergus O'Rourke on his win and well done to Emma Coyle from North Leitrim Macra, who represented Co Leitrim so well in this year's Festival.