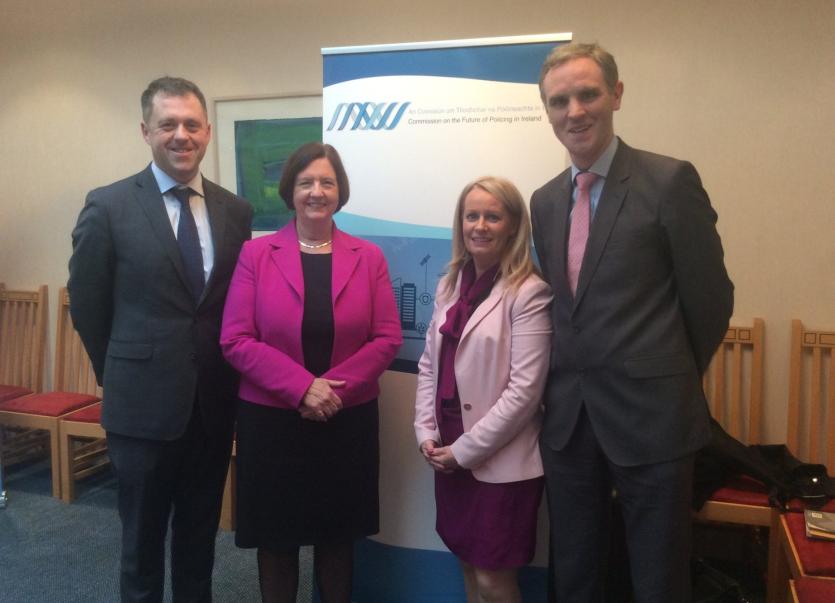 In no particular order - Deputies Niamh Smyth, Thomas Byrne and Shane Cassells with Chair of the Commission on the Future of Policing in Ireland, Kathleen O’Toole

Fianna Fáil TD Niamh Smyth has called on the Justice Minister to get serious about rising rural crime. Deputy Smyth raised the issue with Minister Charlie Flanagan in the Dáil this week.

“There is no doubt that criminals are targeting rural areas because they know that there’s no Garda presence on the ground.” explained Deputy Smyth.

“One couple from Cootehill, who are in their 70s have had their farmyard broken into three times in recent weeks, and despite having barricaded machinery, thieves were still able to make off with some of their equipment. This couple live in fear of this gang returning again. Over the past couple weeks, 16 homes and businesses within an 8 mile radius of Cootehill have been targeted. In another incident in Bailieborough, more than €15,000 worth of equipment belonging to the local Community Employment Scheme was stolen.

“Another family in Mountain Lodge returned to their home to find three men ransacking their home. One of the men was standing at their back door armed with a hurley. They had to wait 40 minutes for the Gardaí – who were coming from Carrickmacross - to arrive. This is completely unacceptable.

“The increase in burglaries and break ins comes at a time when we have seen the downgrading of services at Ballyconnell and Cootehill Garda Stations. Both stations had been operating on a 24 hour basis until their hours were reduced earlier this year. The number of Gardaí on the ground has also been dramatically reduced – down from 413 in 2010 to 330 now. It is no coincidence that at a time when Garda resources have been trimmed to the bone that crime in these areas is on the rise."

“Earlier this week I met with Kathleen O’Toole, who is leading the Commission on the Future of Policing in Ireland, and I raised my concerns with her. These issues will also be addressed at a public meeting on rural crime that I am hosting on the 4th of December. Fianna Fáil Spokesperson on Justice Jim O’Callaghan will address the event. The meeting will take place in the Bailie Hotel, Bailieborough at 7.30pm."