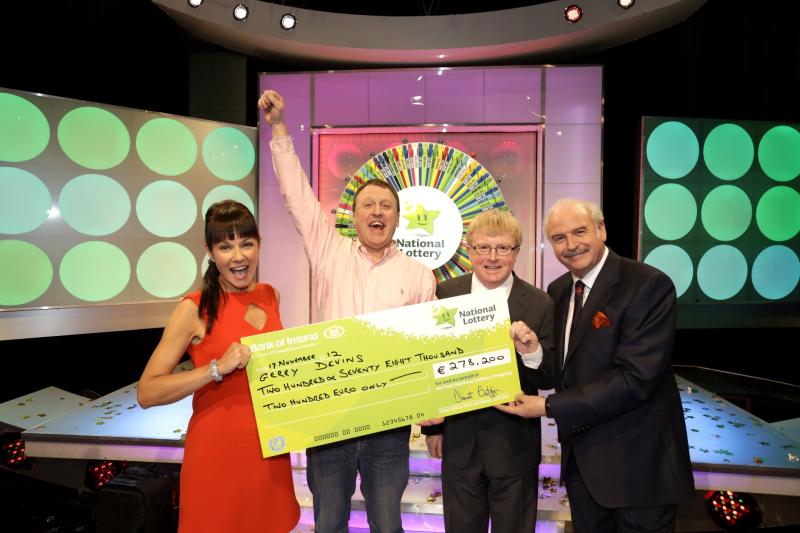 Pictured is Gerry Devins after winning €278,000 on Winning Streak in 2012. Gerry won €250,000 when he spun the wheel. He will hoping for similar when he bids to spin the wheel again on Saturday.

A miner has struck gold after being selected to take part in the iconic game show on RTE this Saturday - just five years after he first appeared on the show and scooped a mega €278,200.

Gerry Devins, who is originally from Manorhamilton and now works in Tara Mines in Co Meath, said today he could not believe it when his name was selected last Saturday to take part in the show almost five years to the day to his last appearance when he played his way to spinning the Grand Prize Wheel.

The 48-year-old married father of three – who is celebrating his 20th wedding anniversary next year said today, “I really cannot believe it. It shows lightening does strike twice! I began my shift last Saturday and a colleague said my wife Siobhan was on the phone in a panic. I thought she was after crashing the car or something but she had the news that my name had been called out to go on Winning Streak.

He added, “I took my work gear back off and told my colleagues that I had to go and rushed straight home. We ended up having a good celebration that night with family and friends”.

Gerry is married to Siobhan and the couple have three children – Aimee (17), Leah (15) and Niall (10). Leah has spina bifida and hydrocephalus and is wheelchair bound. Gerry has worked “underground” as a miner at the nearby Tara Mines for the past 19 years.

Speaking on the impact of winning more than a quarter of a million euro five years ago, Gerry continued: “It was a fantastic experience and the well-wishes we got from our community and friends was amazing. However, the money didn’t change me or my family in any way, shape or form. We enjoyed some of it, paid a hefty chunk of the mortgage off, and our bills were a lot less back then.”

Gerry said he does not buy Winning Streak scratch cards that often but when he was doing the Lotto in Kiernan's Service Station on the Dublin Road in Co. Cavan the shop assistant told him a player who had bought his ticket there had appeared on Winning Streak.

He bought two Winning Streak Scratch Cards and one came up trumps with three stars.

Margaret, who finished up with the Lottery in 2014, said: “I am stunned. Completely shocked. Since I finished with the Lottery people have tended to buy me scratch cards, as I couldn’t play any of the games for 27 years. For my birthday (which was on 9th November), my brother Florence bought me three Winning Streak scratch cards. I got three stars on all three of them and once I posted them I had a gut feeling that I would be on the show! It’s fantastic to be back to see so many former friends and colleagues and I am really looking forward to being on the other side of the camera on Winning Streak”.

The next episode of Winning Streak will be broadcast next Saturday evening (25th November) at 8:30pm on RTÉ One, where presenters Marty Whelan and Sinead Kennedy will guide five players through the iconic show, which gives them the chance to win cash, cars and luxury holidays. One will get the once-in-a-lifetime chance to spin the Grand Prize Wheel with a maximum prize of €500,000.

The other three players chosen to participate in next week’s Winning Streak are:

Teresa McCrory from Omagh, Co Tyrone
Lucy Nolan from Arklow, Co Wicklow
Murt Hunt from Ballyhaunis, Co Mayo
The popular gameshow first appeared on our screens way back in September 1990 and since then a massive 5,840 people have taken part, winning in excess of €165 million in prizes.

Winning Streak will feature games such as; Fantastic Five, High Low Share, Wheel Reveal and the Grand Prize Wheel, giving one lucky player a chance to win up to €500,000. In addition a lucky stub player will be drawn as the winner of a Luxury Cruise for two valued at €5,000 on each week of the show.

Winning Streak Scratch Cards are on sale in over 5,000 National Lottery agent stores nationwide priced at €3. They now have better chances of winning a prize. An amazing 1 in 1.86 tickets have a cash or 3-star prize. A 3-star prize gives players the opportunity to enter a draw to appear on the gameshow.