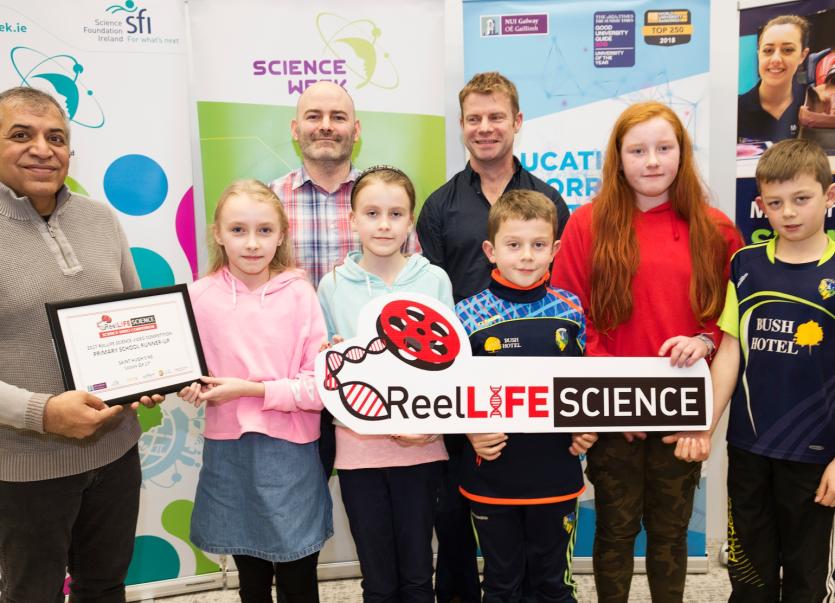 The winners of the nationwide ReelLIFE SCIENCE video competition were announced during science week 2017 which concluded nationally last week. Winners of the 2017 awards were Sooey Primary School, Co. Sligo with the runner's-up award going to St. Hugh's National School, Dowra, Co. Leitrim for their futuristic video ‘Lesson QX 17’, which can be viewed at www.reellifescience.com

Based in NUI Galway and supported by the Science Foundation Ireland Discover programme, the Community Knowledge Initiative and the CÚRAM Centre for Research in Medical Devices, ReelLIFE SCIENCE challenges Irish schools and community to communicate science via engaging and educational short videos. This challenge was met by more than 1,500 students in 83 schools and groups around Ireland, producing over 180 short science videos on a range of topics in both English and Irish.

Selecting the best videos to share the €5,000 prize fund were Trinity College Dublin Professor and Royal Society Fellow Luke O’Neill, BT Young Scientist & Technologist of the Year 2017, Shane Curran from Terenure College Dublin and NASA Spacecraft systems engineer and aspiring astronaut Amber Gell, who said “all of these students should feel like winners, because they did an exceptional job with their entries. I had a lot of fun watching the videos and learning more about their favourite science concepts.”

Since launching in 2013, over 8,500 students in 300 schools and community groups around Ireland have taken part in ReelLIFE SCIENCE. The videos produced have been viewed more than 100,000 times in over 100 countries worldwide.

NUI Galway’s Dr Enda O’Connell said, “We were thrilled again this year with the reaction to the competition, particularly with so many new schools and community groups getting involved for the first time. We are always inspired by the knowledge and creativity shown by the participants in their videos and their passion for science and technology is clear to see. Congratulations to everyone who took part.”