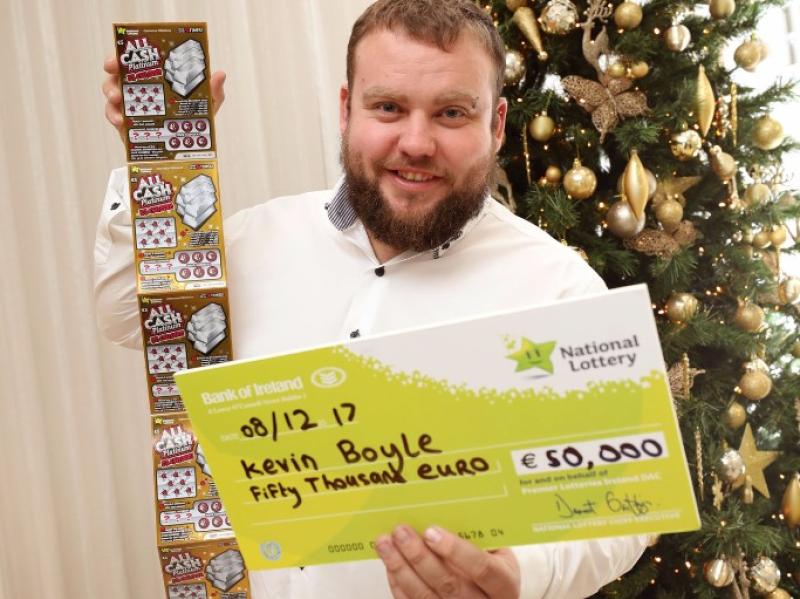 Lucky Leitrim is continuing its winning ways this week with confirmation that yet another lottery prize has been won in the county!

A young farmer from Leitrim had a scratch card sitting in his car for four days before he scratched it and realised he had won a whopping €50,000!

Kevin Boyle, (27), from Aghacashel,  Co Leitrim, completely forgot he had bought the scratch card and it was still sitting in his glove box days later.

He bought the All Cash Platinum scratch card in the Gala store on Church Street, Drumshanbo in Co Leitrim last Monday - and it wasn’t until Thursday morning when he scratched it.

An excited Kevin made the journey to National Lottery HQ in Dublin to claim his prize today - a day that people from the country traditionally swamp the capital for the start of the Christmas shopping season.

Speaking in the Winner’s Room Kevin said: “I couldn’t believe it. I nearly had a stroke. I had to drive straight home and get the father to double check it. I don’t buy scratch cards too often, but the woman in front of me bought a scratch card and I said to the guys behind the counter to give me the same. And to think it was sitting in the car for four days! It’s bizarre luck”.

When asked what he will do with the windfall he said: “Well I’ll have a good Christmas, that’s for sure and I think it will be enough to get a deposit for a house too”.

Oh if only we were all this lucky!