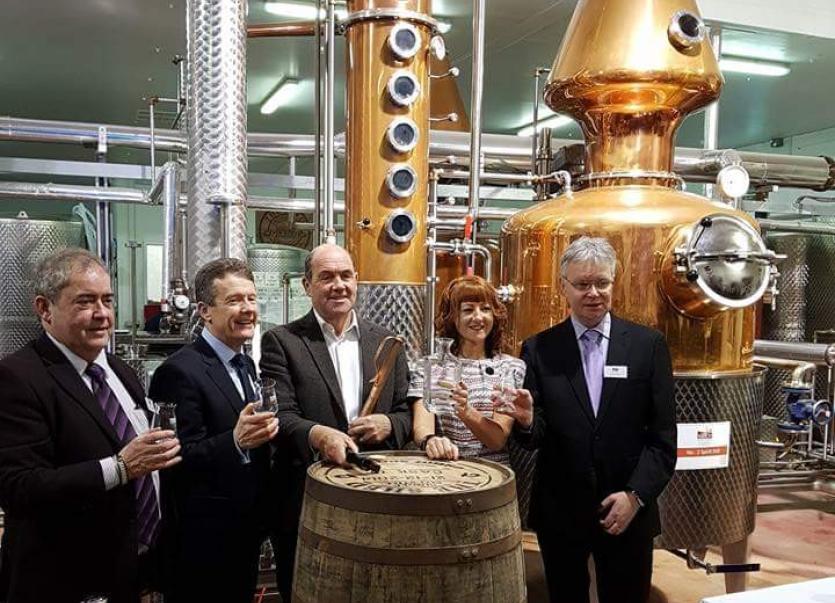 The Minister for Rural and Community Development, Michael Ring TD, officially launched Connaught’s first whiskey in 104 years at The Shed Distillery of PJ Rigney at the Food Hub in Drumshanbo,last Thursday.
Minister Ring also unveiled plans for a €1.5 million visitor centre which is due to open at the Shed Distillery next year.

The distillery is one of a number of start-up businesses that are based at the Food Hub which was established in 2004 and has become one of Ireland’s premier artisan multi-tenant food production and enterprise centres.

The Department of Rural and Community Development has allocated over €280,000 to support the Food Hub in Drumshanbo.
Minister Ring said "I am very encouraged to see the great progress here at the Food Hub and the Shed Distillery in particular.
“This excellent initiative is testament to the hard work and dedication of Pat and Denise Rigney and the determination of the local community here in Drumshanbo to build a future for themselves and generations to come.

“My Department has allocated over €280,000 to support the Food Hub in Drumshanbo over the last two years.
“From small beginnings, the Food Hub is thriving and now has over 70 people working out of it. The Shed Distillery, which is part of the Hub, has been particularly successful and employs 18 people with further support staff based in Dublin.

“The enormous success of ‘Drumshanbo Gunpowder Gin’ which is produced in the Shed Distillery is an extraordinary story.
“I will continue to support this proactive approach and facilitate sustainable development of rural communities all over Ireland.
“This excellent initiative is very close to another very innovative project, the Acres Lake Boardwalk that received funding through the Outdoor Recreation Infrastructure Scheme in 2016 and was opened earlier this year.

“Projects such as this demonstrate a measured collaboration between the Local Authority, the local community and business interests and I am delighted that my Department has been able to support them.

“Projects such as these are indicative of a real proactive approach to development that is evident in Leitrim and throughout this region. The benefits will be felt by the entire community through employment and increased economic activity in the area.”

Alcohol Beverage Federation of Ireland (ABFI), the representative body for drinks manufacturers and suppliers in Ireland, has welcomed the news from Leitrim that the first whiskey produced in Connacht in 104 years has come of age, at The Shed distillery in Drumshanbo.

Patricia Callan, Director of ABFI said “The whiskey industry makes a hugely positive contribution to the Irish economy, as it continues to grow apace. Today’s announcement from The Shed distillery is another sign that the Irish whiskey renaissance is continuing at a promising rate.

“Irish whiskey is the fastest growing spirits category in the world, with sales of premium Irish whiskey up by 135 per cent in the last five years. Exports grew rapidly again in 2017. The number of distilleries operating in Ireland has grown from just four a few years ago to 18 now, and there are 16 more with planning permission.

“It’s imperative that the Government recognises the value of the sector and helps it to continue growing, as it faces issues such as Brexit, the second highest excise rate in the EU, and the unintended consequences of the Public Health (Alcohol) Bill.“

Opening of the first whiskey cask from @thesheddistillery shortly in Drumshanbo Co. Leitrim. Will be tasted in specialist Irish whiskey glasses from @TuathGlass pic.twitter.com/HhfEBANMfw

Congrats to the Pat and his team.Great day out @SHEDDISTILLERY ! We even got to sample a drop of the precious first cask !!! pic.twitter.com/OMpAzAFbND

The first cask of Irish whiskey matured in Connacht has just been opened in Drumshanbo, #Leitrim #Connacht #Irishwhiskey pic.twitter.com/W6cJgzOw4v