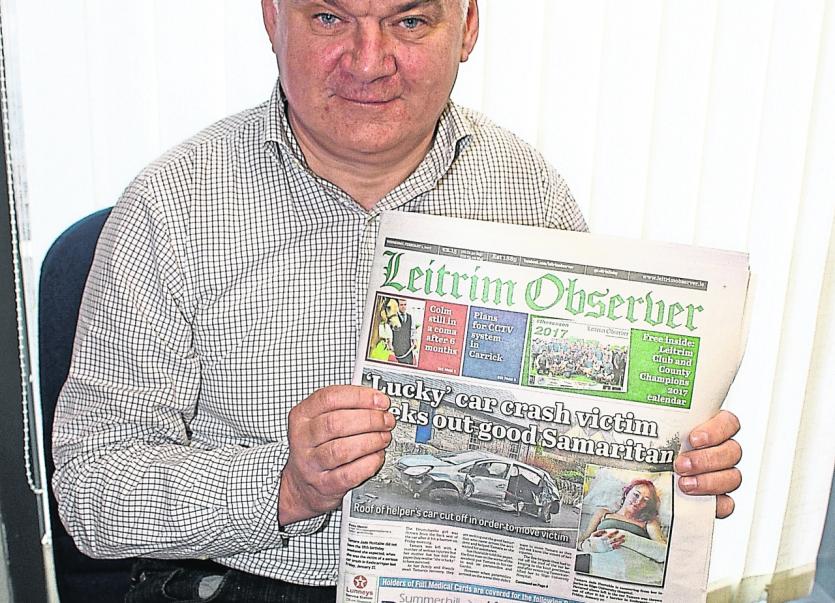 The old saying goes that one good turn deserves another and Sligo man Paul Egan, who featured on the front page of the Leitrim Observer after he came upon a car crash in Keshcarrigan on January 27, has extended the joy of Christmas to Leon Quinn who helped ensure Paul wasn't left out of pocket.

Having come across the single vehicle crash, Paul offered his vehicle as a sanctuary for an injured female while waiting for medical assistance to arrive.

By the time assistance arrived the injured passenger's condition had deteriorated and emergency services were left with no option but to cut the roof from Paul's car.

Paul later discovered he wasn't able to have the damage done to his own car covered by insurance and while waiting for the situation to be resolved he rented a car at his own expense.

Upon hearing about the story in the Leitrim Observer Leon Quinn set up a 'Just Giving' page to ensure the Good Samaritan was not left out of pocket.

The story struck a chord with many readers and the target of €5,000 was quickly surpassed and a total of €7,615 was raised for Paul.

Leon this afternoon posted on Instagram that he had visited by Paul who hadn't forgotten his good deed earlier and the year and was keen to say thank you and wish Leon a happy Christmas.

So a guy named Paul Egan somehow found where I live and randomly called in with these #Gifts Couldn't place his name over the intercom until I seen his face at the door. I forgot him a little but he didn't forget me.. Blown away. #Karma #OneGoodDeed #HappyXmas

Include caption Copy Embed Code By using this embed, you agree to Instagram's API Terms of Use. Close

It's great to see the spirit of Christmas alive and kicking.