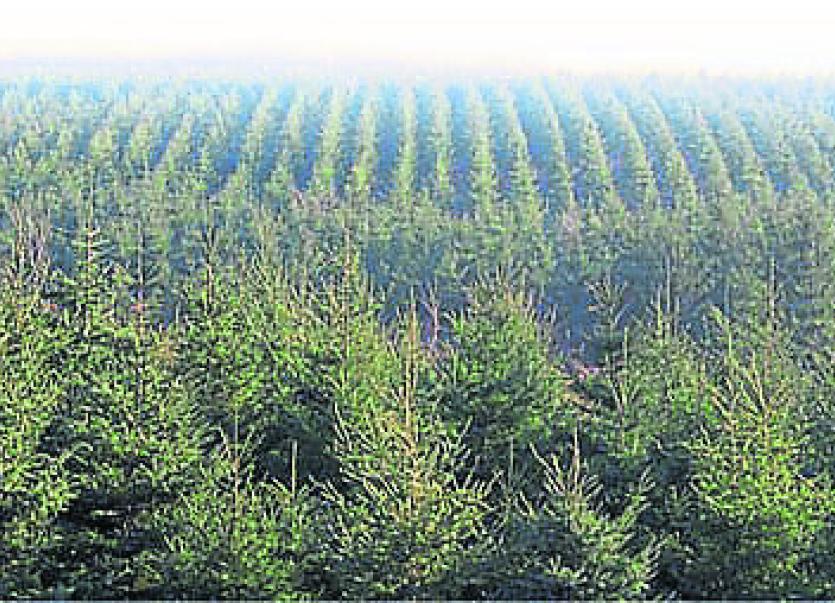 Leitrim's councillors claim nearly 50% of available land in Leitrim has been planted and have expressed concern that “trees will replace people” in this county unless a more balanced regional spread of forestry is encouraged at national level.

At Monday's January Council meeting, representatives of the Department of Agriculture, Food and the Marine (DAFM) gave a special presentation outlining plans to encourage further planting across Ireland and gave figures for forestry employment, licence applications and payments in the county.

"Trees are replacing the population of Leitrim, there is no doubt about that," said Cllr Enda Stenson following the presentation.
He disputes Department figures showing 17% of Leitrim planted arguing this figure doesn't give a clear indication of the situation as it includes the landmass of the county.

“If you eliminate all the land that cannot be planted the figure of the county's available land which is under forestry is actually closer to 50%, and getting bigger," he said.

Acknowledging there is a "lot of anger" towards forestry in the county he said this is down to the sheer volume of planting being encouraged and the fact that people from outside the county are buying land and planting it.

“The people of Leitrim have to call a stop to this or Leitrim will become a thing of the past bar a few isolated towns and villages," he warned.

Councillors said it is particularly galling for those who want to build here in Leitrim to know they cannot because of wastewater treatment planning guidelines, yet much of the forestry in Leitrim requires no planning permission, regardless of the impact to soil and water quality.

Cllr Justin Warnock said it is time to call a stop to forestry in the county.

“We have no problem with doing our bit for forestry in Leitrim but we have enough. Let it be done somewhere else," he said. Cllr Padraig Fallon pointed out there are townlands already “taken over with forestry” adding, “the townland my dad grew up in is now 80% planted.”

Councillors cited environmental concerns with Cllr Warnock alleging planting around Lough Melvin is having a negative impact on phosphorus levels in the lake. He said planting should not be allowed in areas of environmental sensitivity while Cllr Stenson argued against the use of non-native species such as Sitka Spruce which, he said, affects soil acidity and “ruins the land”.

Growing interest from those outside the county in purchasing land for planting in Leitrim is also stopping young local farmers from buying land as they can't compete with the prices being offered. Councillors claimed Leitrim farmers are being encouraged to apply for forestry licences in their own name in order to secure land sales. Others said they are aware of companies continuing to use local farmers' names and addresses despite the land having been sold on.

In January 2015 it became possible for non-farmers to apply for forestry licences and Department officials argue that the majority applying have family links to farming, however Cllr Brendan Barry said a requirement should be put into play where those applying to draw down premiums must be living within 50km of the county.

Cllr Gerry Dolan and Cllr Caillian Ellis both noted the damage to roads and communities caused by forestry, with Cllr Ellis stating greater restrictions are necessary if we are to encourage tourism growth in the county.

“We can't continue to put trees before people, before the future of our county,” argued Cllr Dolan.