Leitrim actors star in 'No Party for Billy Burns' 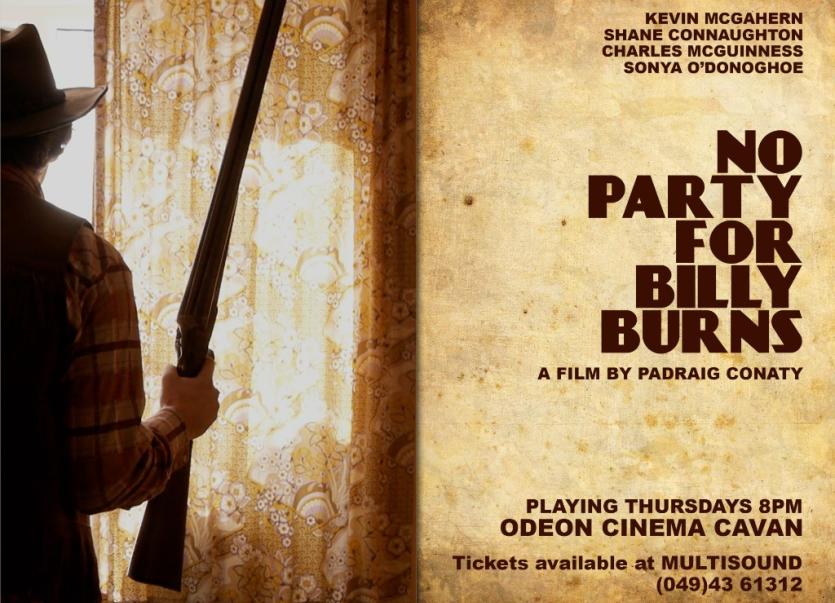 No party for Billy Burns is a directorial debut by Padraig Conaty and stars actor-writer (and former presenter of The Republic of Telly) Kevin McGahern. The film is set and filmed in West Cavan in the Arvagh-Gowna area. It also features Carrigallen actors Charlie McGuinness in a strong supporting role and Seamus O’Rourke who makes a short but impressive cameo appearance.

Kevin McGahern plays the lead role of Billy Burns. A quiet and socially awkward young man who suffered the anguish of loosing both his parents at a very young age. He was reared by his grandfather (Shane Connaughton) and together they share a home in a bleak and isolated rural location.

Billy Burns retreats to a fantasy world to cope with his situation. The opening scene captures this effectively with the bleakness of the rain lashing outside against the walls of the small bungalow where Billy lives and then inside we are introduced to the character presenting an imaginary radio show on his grandfather’s antiquated radio equipment.

Billy is obsessed with Cowboy films and spends most of his evenings in front to the TV watching Westerns. He fantasises about being a notorious gunslinger.

Despite the low budget, (only €8,000) the cinematography of the film is captivating especially the shots of the wide open valleys of rural Cavan. The director, Padraig Conaty directly or indirectly making homage to the open prairies and rural heartland of America as captured in Terence Malick’s 1973 film: Badlands. The scene with the central characters standing on rows of bales of silage silhouetted against the setting sun is particularly striking.

Isolation appears to a key theme of this excellent film. Billy Burns has little connection with is ageing grandfather or the people of his own age group who frequent his local village. He finds it difficult to fit in with the group of lads who hang out in the pubs. They regularly take advantage of Billy’s shy and sensitive manner to poke fun at him. Only Ciaran the local hard man who is superbly played by Charlie McGuinness steps in at times to protect Billy from their jibes.

The only person who shows Billy tenderness is Ciaran’s girlfriend Laura (Sonya O’Donoghue). However Billy misinterprets this tenderness for something more which results in greater anguish for him.

Despite the serious nature of the film it has its lighter and humorous parts. Aughnacliffe actor Ray Reilly as the local Garda Sargeant gives and outstanding performance and delivers some comedic relief.

Overall this is a highly impressive film, excellently directed by Padraig Conaty. Kevin McGahern’s portrayal of the central character is poignant and subtle and expertly captures the sense of isolation felt by some young people in rural Ireland. Judging by this production both individuals have a bright future in front of them and this film should be awarded national distribution at the very least.

At present the film can be enjoyed in the Odeon Cinema in Cavan town on Thursday January 18, 25 and February 1 at 8pm. Tickets are available only from Multisound in Cavan town (049) 436131.