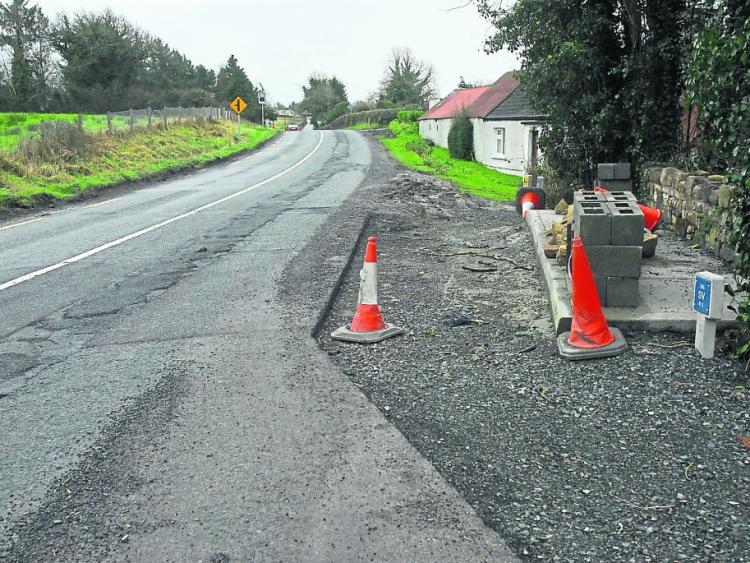 The R201 road on the Carrick-on-Shannon side of Mohill which has seen new water mains being laid in recent months. Photo by Willie Donnellan.

There is growing anger in the Mohill area at the state of the R201 road into the town from the Eslin side with local councillors strongly criticising sub contractors for leaving the road “in a disgraceful condition.”

New water mains have been laid in that area in the final quarter of 2017 by sub contractors to Irish Water.
A temporary surface has been laid over the trench and it is this surface that is causing such concern and which has been described as “quite dangerous for road users.”

The January meeting of Carrick-on-Shannon Municipal District heard both Cllr Séadhna Logan and Cllr Enda Stenson vent their anger and frustration at the condition of the road.

Cllr Logan tabled a motion calling on the Council to ensure the sub contractors restore the surface of the road to the condition it was prior to the laying of the new water mains.

“This road is in a disgraceful condition at present and the surface is quite dangerous for road users,” he said.
Cllr Logan said serious pressure needs to be put on the company to up their game and not to forget the piece of road at Treanmore where they parked their machines which, he said, is in a “shocking” and “deplorable state.”

Cllr Enda Stenson said the way the road was left over Christmas was not good. He said some of the potholes on it were fixed but some are still dangerous to drive across.

“The condition of the road is unacceptable for the main R201 road,” he said, and called for it to be addressed immediately by the company.

Shay O'Connor, Senior Engineer Roads, told the meeting the contractor is Mast Construction Ltd and they are responsible for both the temporary and final surfacing of that section of road as per the conditions of their contract.

He said Mast personnel are still on site doing the connections to the new main and are monitoring the performance of the temporary surface. The permanent restoration will be carried out, weather permitting, in a couple of months.

He added that the Council has taken it up with the contractors numerous times and have told them it is unacceptable. The contractor is liable for any accidents on that road, he stated.

Following on from the meeting, both councillors contacted this newspaper last Monday to further highlight the condition of the road outside Mohill.

Cllr Logan again called on the Council to immediately tackle the “huge potholes” which have appeared where the pipe work was laid between Mohill and the turn for Eslin.

The paper understands that some of these potholes have now been filled.
Cllr Logan told the Leitrim Observer he had met a person whose tyre had burst after they struck a particularly bad pothole near the town on Sunday evening last.

He said that this person had pulled to the side of the road to remove their flat tyre in the dark and was nearly hit by a vehicle travelling along the road.

“So far this morning - Monday, January 22 - I have been phoned by three people whose cars have all sustained damage as a result of poor road surface on the R201.

“The Council will face serious bills from people whose cars are damaged and it is time that this section of roadway is fixed,” he said.

“At the recent Municipal District Meeting we were told that the current surface is temporary and the contractors who replaced the water main along this stretch of road will be coming back in a few months to lay a finished surface.
“But the fact is we cannot wait for this to happen in a few months. It is very dangerous the way it is and it is not acceptable for anyone to have their car damaged as a result,” Cllr Logan stated.

Meanwhile, Cllrs Logan and Stenson said they were aware that the Ussaun area of Mohill saw residents left without water for all Friday night, January 12, and a good part of Saturday, January 13.

Mr O'Connor said they would take it up with the contractor and said turning off people's water was not acceptable.