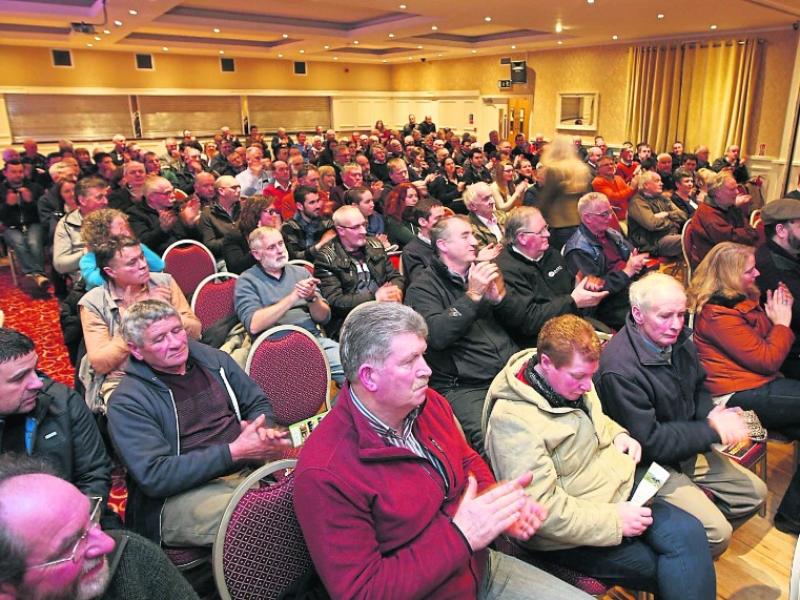 Nearly 300 people packed the function room of The Bush Hotel, Carrick-on-Shannon for a special meeting on Forestry and the Environment last Friday night.

Forestry has become a fractious issue in Co Leitrim and it is clear that the organisers of the meeting, the Irish Natural and Hill Farmers Association (INHFA) are aware of the problems surrounding the sector and issues facing local communities who feel “surrounded and isolated” by forestry. It is also clear the association is aware of the impact on farmers - those who want to plant their land as well as those who feel the demand for forestry is pricing them out of the market for land.

Gerry Loftus, Forestry Chairperson for the INHFA said that farmers “need to stop being led by the nose” when it comes to issues like forestry.

He said INHFA are not in the business of telling farmers what to do with their land, but said there are serious concerns about the impact of forestry, especially Sitka Spruce, on the land and waterways. They are also impacting local communities adding where forestry comes in, people move out.

He said broadleaf plantations are far preferable and, unlike Sitka Spruce, allow for greater biodiversity in the undergrowth, are not clear felled like conifers and could become a potential draw for tourists.

Although the aim is to have 30% broadleaf plantations nationally, Ireland is falling far below this target at the moment.
“The fact is farmers were not meeting planting targets and the Government is now incentivising non-farmers to plant land,” something, Mr Loftus said, is leading to a massive increase in forestry in areas like Leitrim and Cavan.

Of this much is in the form of Sitka plantations, rather than broadleaf. At present payments are front loaded on forestry for 15 years, but conifers take another 15 years before they can be harvested and with broadleaf, the harvesting times can be even longer.

INHFA is arguing farmers should not get a front loaded payment, but should be paid a proper ongoing payment for planting of their land and the organisation also argues that tax free incentives should be restricted to farmers and not investors.
Mr Loftus acknowledged the commitments Ireland has entered into with regard to offsetting carbon emissions, but said it was unfair to make certain counties carbon sinkholes for other areas.

“It is time for us to go into business with nature, rather than make a business opportunity of nature,” said Mr Loftus.
INHFA want a moratorium on the planting of invasive species such as Sitka Spruce and want broadleaf plantations prioritised instead.

The Association also wants the abolition of the existing tax free incentive scheme for investment in forestry and want any carbon credits arising from carbon sequestration of farming land to belong to the actual farmers.

Clear felling should be banned, said Mr Loftus and replaced with continuous cover practices, while any planned expansion of the dairy sector needs to include dairy farmers taking responsibility for their own carbon footprint. This, said Mr Loftus, means dairy farmers should include forestry as part of their own land holdings, suggesting the development of agro-forestry opportunities, where animals graze amongst wider spaced broadleaf planting.

Proper planning processes are also needed so that people can have a real say on what is being planted near their homes.
Concluding, Mr Loftus said it is clear a “plan of action is needed” to safeguard the future of rural communities, traditional farming practices and the local biodiversity, water quality and habitats.

INHFA will now seek a meeting with the Minister for Forestry, Andrew Doyle and a private members bill in the Oireachtas to amend current forestry planning regulations.

Other measures will also be sought as a matter of priority.