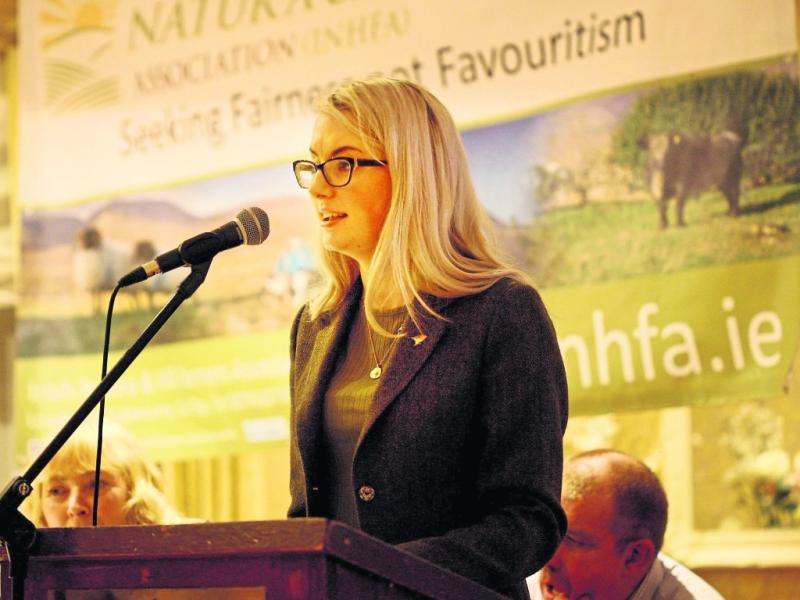 She is well known for her community involvement, for teaching and performing Sean Nos Dancing and for representing Co Leitrim as our Rose of Tralee in 2013, and now community activist, Edwina Guckian, says she is fighting for the future of the county she loves.

In an impassioned speech at last Friday's meeting, Ms Guckian paid tribute to those who had gone before us in Co Leitrim adding it would be very sad “if we bury their story in the shadow of forestry”.

Observing forestry was not happening on a large scale in places like the Golden Vale, but rather here, in Leitrim “on marginal land”, Ms Guckian said “Leitrim is being sold off,” accusing the Department of Agriculture of “turning a blind eye to the fact that Leitrim is being sacrificed”.

Describing herself as a “proud Leitrim woman”, Ms Guckian pointed out that, with the amount of forestry being planted, Leitrim in 10 years “will be a very different place”.

She was extremely critical of the use of the non-native Sitka Spruce in plantations, noting this may give the farmer the quickest returns but also “caused the most damage” to the environment and to people’s health by blocking natural light, especially in winter.

“The needles of (Sitka) are contributing to acidity in our soil and water,” she maintained, adding that broadleaf forestry was far better and, when given the proper care, can thrive on even marginal land.

Broadleaf native species don’t block the light like conifers do and lose their leaves in winter, eliminating issues with massive plantations blocking light to nearby homes, she added.

She said that in 2017 86 licences were granted for felling in Leitrim while just 9 homes were granted planning permission.
“I am sick of my friends leaving (Leitrim),” she said, “Give them a reason to stay and they will stay,” she said calling for greater job creation, better broadband provision and better supports for those wishing to build, live and farm in the county.
She said banks should be prepared to lend money to farmers wanting to purchase land, not just for forestry and argued that sustainable models of forestry should be given priority over massive confer plantations.
If farmers disappear then towns and villages will follow, she warned.

“We need to come out of here with a positive attitude” and solutions to this issue. “If we are going to stop and change (the future facing Co Leitrim) we need to act as one.”

A lot of people have been asking me what I spoke about at Friday’s meeting on the issue of forestry in Leitrim. Here’s a copy of it. https://t.co/MAmxsteMHk#Leitrim #forestry

"In Leitrim in 2017, 86 forestry felling licenses were granted to companies by the Council… while 9 houses were granted planning permission" - @EdwinaGuckian . Major questions posed about effect of massive industrial forestry plantation on life in Leitrim. Well worth the read. https://t.co/TlcUYFQnZR