The former garda station in Dromahair.

A wide-ranging debate on policing in Leitrim and in particular the closure of four garda stations in the north of the county was one of the main topics of discussion at last Monday's meeting of the County Leitrim Joint Policing Committee in Carrick-on-Shannon.

Cllr Sean McDermott submitted a question to the meeting in which he stated the closure of many garda stations in Co Leitrim “has left the county very vulnerable” particularly as it is a Border county.

He said there was a commitment to smart policing at the time and a clinic was set up in Dromahair but it only lasted a short time because there was no uptake locally in it.

Supt. English said Kiltyclogher and Glenfarne had only one garda in each station and they are still policed from Manorhamilton Station.

“I don't believe the closure of those stations has diminished garda visibility in the district,” he said.

He said to re-open any garda station was “ultimately a decision for the Commissioner.”

Cllr McDermott and Cllr Mary Bohan agreed with the sentiments expressed and said the Gardai were doing their best to police the area and they were in no way apportioning any blame in this issue on the local garda force who are doing their very best.

Cllr Bohan said her own local station in Drumkeerin had a sergeant and two gardai in it at the time it closed.

“There is a need for some of these stations to be re-opened,” she said, adding that the former Drumkeerin Garda Station is still there and has not been sold.

She also said Dromahair has a huge population and suggested the Joint Policing Committee should make a case to have some of these stations re-opened.
“It does make a difference, there was a garda presence,” she said.

“I know at times Manorhamilton is under serious pressure regarding the number of members and cars and people are worried when they don't have a garda in their area.”

Cllr Bohan said the Joint Policing Committee should look at making a proposal to the Commissioner.

Taking the area of Drumkeerin, Dromahair, Killargue, Tarmon and over to Arigna, she said, “I don't think that area is properly policed because we don't have the resources.” Her proposal was seconded by Cllr McDermott.

Supt. English acknowledged that the issue of policing is “hugely emotive” and that areas lost their guards and certain commitments were given at the time.

He stated it was ok to make a recommendation but they must also make a business case to have any station re-opened.
“I am genuinely trying to increase visibility in all areas,” he said.

“If we were to open two new stations where are we going to get the gardai to fill them?” he asked.
“Do I take them out of Carrick-on-Shannon or Manorhamilton and reduce the numbers there?” he continued.

Cllr Bohan said that the numbers game has always militated against Leitrim.

“It can't be all about numbers and statistics. I'm criticising the lack of resources,” she said, adding that she doesn't trust the decisions being made at national level.

“The decisions are not being made for the right reasons,” Cllr Bohan said.

“We have to make a case for Leitrim, it's a matter for the Department of Justice and Department of Finance to resource it,” she said.

Cllr Bohan was adamant that people need the service and it was up to them in the JPC to make the case “from the ground up.”

“We can't make it purely on statistics and numbers,” she repeated. 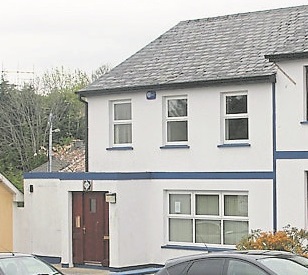 The former garda station in Drumkeerin

Chairperson of the Joint Policing Committee, Cllr Sinead Guckian said they can include the proposal in their strategic plan for 2018.

“We need to start mapping this case, firstly in the area you are focusing on and, if we get it correct, we can then use it for other areas (of the county),” Cllr Guckian said.

Supt. English said a report was published into the proposed re-opening of Stepaside Garda Station in Dublin and certain criteria were applied in that case.
“You can start by using that criteria, I am certainly willing to assist you with that,” he said.

Supt. English also reassured the committee that policing cover is there for the rural towns and villages mentioned and stated that on occasion Dromahair is served by members coming out from Sligo to assist, while Ballyconnell and Cavan gardai assist in the Carrigallen area and Ballyshannon gardai in the Kinlough area, if needed.

Speaking to the Leitrim Observer after the meeting, Cllr McDermott reiterated his desire to see some or all of the four stations that were closed in the north of the county being re-opened.

He said it is a very important issue in the Border area and said that while some of the garda stations have been sold off and are not available for use, there are plenty of buildings in the area that would suffice.

In relation to raiders travelling into the county to commit crimes, Cllr McDermott said he would like to see a greater presence of checkpoints on the roads.

“If they thought they would be stopped at a checkpoint it would stop them far quicker,” he said.

Cllr McDermott also welcomed the idea of cameras being positioned in villages in north Leitrim to capture traffic movement, etc.
He said this proposal is being worked on at the moment and “it would be another part of the jigsaw to solving the problem.”