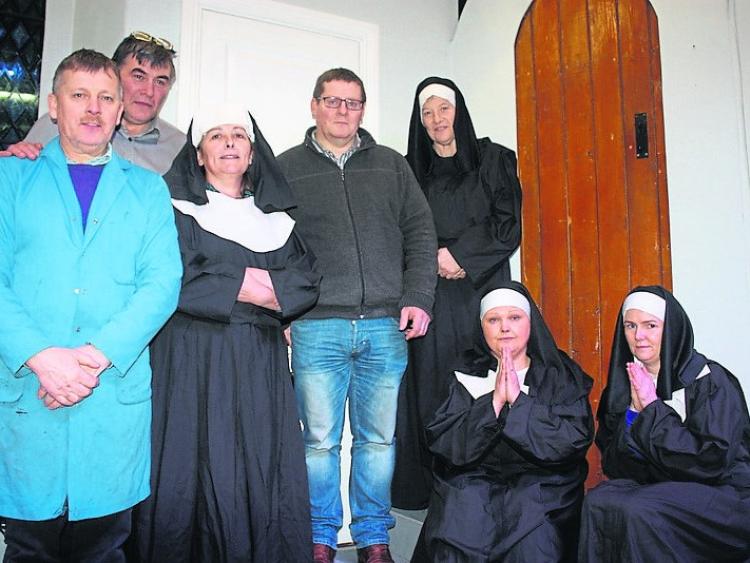 The Sisters of Perpetual Sewing are back in this side splitting comedy farce - Drinking Habits 2 - performed by the Aughawillan Drama Troupe.

The Sisters miss the excitement of the old days when they were saving convents and reuniting long-lost families. So when they learn that the orphanage where Paul (John McTeggart) and Kate (Gillian Warren) grew up is in peril, they can't wait to come to its rescue.

Everyone pitches in to mount a play to raise money, but it's no easy feat when Kate's expecting any day, Sally's (Karen McGovern Prior) hiding from stage-fright-stricken Paul after another flight from the altar, Mother Superior's (Eileen McTague) acting is unexpectedly narcoleptic, and the sisters' award-winning wine keeps getting switched with the grape juice.
Drinking Habits 2 is directed by Brian Dolan who is now a seasoned director with packed out audiences to his credit.

This upbeat comedy /farce brings a whole new slate of surprises that are guaranteed to have you on a comedy high.
Aughawillan Drama Troupe are excited to present a comedy “Drinking Habits 2” by Tom Smith in Aughawillan Hall on February 15, 16, 17 and 18 at 8.30pm sharp.

Tickets are €10 and they are sure to sell quickly so please book early to avoid disappointment.
Guaranteed to deliver a brilliant night’s entertainment the cast are looking forward to seeing you there.

To secure your tickets for “Drinking Habits 2” phone (087) 6486804. Don't forget to like Aughawillan Drama's facebook page. You can also email the troupe on aughawillandrama@gmail.com