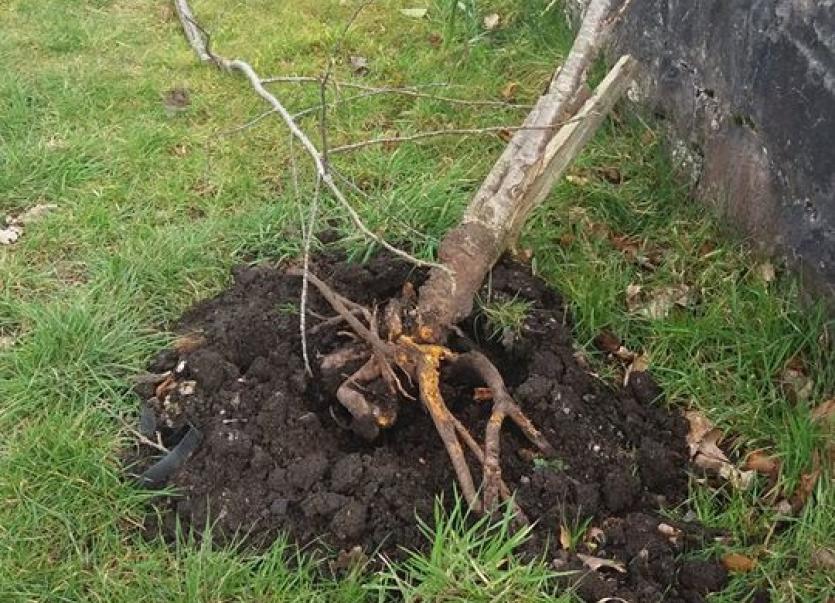 Damage to one of the trees in Carrick-on-Shannon, Co Leitrim. Photo: Carrick Tidy Towns Facebook

Carrick-on-Shannon residents have expressed their disgust and anger after trees, planted by volunteers in the town, were targeted by vandals.

According to a post on the Carrick-on-Shannon Tidy Towns Facebook page, the vandals struck in the early hours of Monday morning, March 12 in the Summerhill area of the town.

The vandals broke several trees and uprooted others, removing their stabilising stakes.

The Facebook post noted: "A few weeks before the heads were knocked off the daffodils here at night. These trees and flowers were bought and planted by volunteers who give their time free to keep the area looking good. It is very disheartening to see their hard work ruined by acts of vandalism. We ask anyone who has seen anything to report to Carrick Garda."

The news has caused a great deal of anger in the town with calls for the perpetrators to be publicly "named and shamed".

One poster noted: " Disgraceful. The majority of the community really appreciate the time and effort put into making the area a lovely place to live."

Another said: "This is really not on whoever done this. Carrick on Shannon is so lovely and all the people there look after it so well. I don't know what these people were thinking about when they done this destruction. I hope they are found out n made to do the cleanup n do a long community service to make up in some way for what they have done. They are a disgrace."

Anyone who may have information on those responsible for this criminal damage should immediately contact Carrick-on-Shannon Gardai in confidence on (071) 9650510.