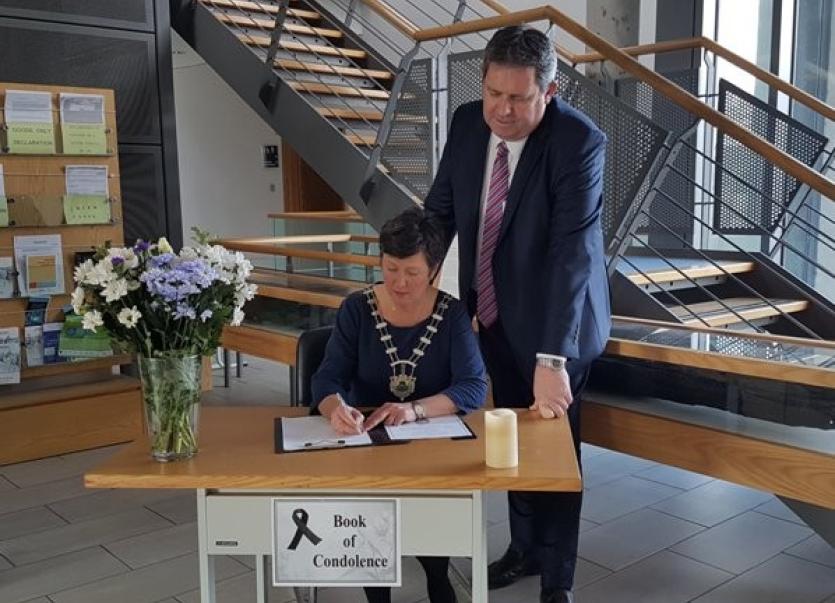 Leitrim County Council have opened a Book of Condolence at Áras an Chontae for the late Frank Murray, former Secretary General to the Government and Commissioner on the Independent Commission for the Location of Victim's Remains which will remain open until Wednesday April 18.

Tributes from across the political divide have been paid to Carrick-on-Shannon native Frank Murray, who passed away on Saturday last, March 31 at his home in Dublin.

President Michael D Higgins and Taoiseach Leo Varadkar were among those who led the tributes to Mr Murray, who was described by the Taoiseach as, “An exceptional public servant.”

Mr Murray served at the Land Commission, the Houses of the Oireachtas and at the Department of the Taoiseach where he worked in a number of Divisions before becoming Secretary General to the Government from 1993 to 2000. He had also served as Private Secretary to then Taoiseach Liam Cosgrave.

On retiring he assumed a number of roles including as Commissioner on the Independent Commission for the Location of Victim's Remains.

Leading the tributes to Mr Murray, President Higgins said, “As a public servant, in a distinguished career, he held the respect of members of the Government right across the political spectrum.

Statement by President Higgins on the death of Frank Murray, former Secretary General to the Government: https://t.co/eGPhRbbUSL

"After his retirement, to his native Leitrim - for he was a proud Leitrim man – he went on to serve the State in a most valuable way, including in the search for the Disappeared.”

Taoiseach Leo Varadkar also referenced Mr Murray's work with the search for the Disappeared acknowledging “The professionalism and sensitivity he brought to his work over the past number of years at the Independent Commission."
Justice Minister, Charlie Flanagan, a personal friend of Mr Murray's added, “In all of his work Frank was a consummate professional and a perfect gentleman. He has truly done this State some service.”

Former President Mary McAleese also paid tribute saying, “He was a very quite, soft-spoken man and exactly the kind of person for the type of job he undertook in retirement. His death is the end of a great, great Irish man.”

Former president Mary McAleese says the death of the Victims' Commissioner, Frank Murray is the end of a 'great Irishman' pic.twitter.com/g9O88iC2Ky

The Cathaoirleach of Leitrim County Council Finola Armstrong McGuire paid tribute to her former neighbour recalling, “Frank grew up on Main Street, Carrick-on-Shannon and though his working life brought him to Dublin he kept a strong connection with his Carrick family, his neighbours and his friends. In Dublin he spoke of his home town with great pride and supported Leitrim in every way he could.

Leitrim County Council have opened a Book of Condolence at Áras an Chontae for the late Frank Murray Former Secretary General to the Government and Commissioner ICLVR which will remain open until Wednesday 18th April 2018. pic.twitter.com/vCrmM70PrP

“His work as a public servant is well documented and we in Leitrim are very proud that in his retirement he took on the role of co-commissioner of the Independent Commission for the Location of the Victims’ Remains.”

Those sentiments were echoed by Senator Frank Feighan who described Mr Murray as, “The ultimate diplomat and his intellect and grounded common sense was always helpful in sensitive situations.”

Senator Feighan said: “I was very sorry to hear of the death of Frank Murray from Carrick on Shannon County Leitrim.

“He was the ultimate diplomat and his intellect and grounded common sense was always helpful in sensitive situations.

Former Sinn Fein President, Gerry Adams, also paid tribute saying, “I am very sorry to hear of the death of Frank Murray. He was a decent courteous man, and an outstanding public servant.”

I am sorry 2 hear of the death of Frank Murray, a Commissioner for the Location of Victims Remains. Frank was a decent courteous man & an outstanding public servant. I extend my sympathy to his family. Go ndeanfaidh Dia trocaire air.

Secretary of State for Northern Ireland, Karen Bradley also offered her sympathies saying, “His work with the Independent Commission for the Location of Victims' Remains has brought closure for so many families of the Disappeared and they will be forever grateful for his tireless work on the Commission over many years.”

Tributes were also paid by Carrick-on-Shannon Historical Society, with Mr Murray having been a long-term member of the group.

Mr Murray's removal will take place tomorrow, Thursday, April 5 to The Church of Our Lady of Perpetual Succour, Foxrock arriving at 5pm. Funeral Mass at 12 noon on Friday followed by burial in Dean’s Grange Cemetery.