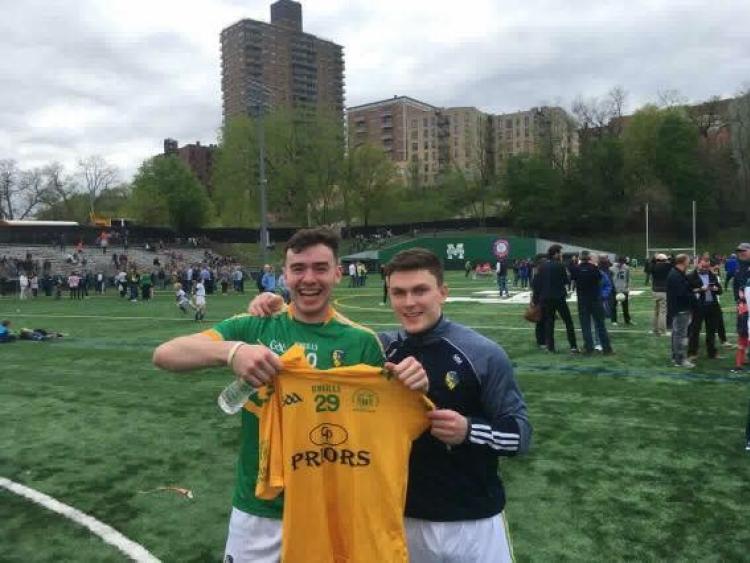 Watch highlights as Leitrim fought back in the dying moments against New York to deny the hosts a historic win in Gaelic Park. pic.twitter.com/HOwwS1av4P

Whether you were in Gaelic Park, huddled around a radio or following updates on social media Leitrim's dramatic extra-time victory over New York captured the attention of the nation.

The opening goal of the game, scored by New York's Shane Horgan had Leitrim supporters contemplating the prospect of defeat and it got worse for Leitrim as the hosts opened up a six point lead before Leitrim launched their comeback.

There was a bumper crowd in Gaelic Park with both teams roared on by vocal support throughout.

Some crowd at Gaelic Park! https://t.co/uB4Dvekuxg

Dromahair man Tony Kelly with @JoeBrolly1993 in Gaelic Park today for the match v @NewYorkGAA We suspect Tony, a great Leitrim Supporter, will be singing "The Streets of New York" later tonight. pic.twitter.com/g34lZkmALq

After an epic encounter there was no separating the sides after 70 minutes and for the second time Leitrim and New York needed extra-time to find a winner.

Ultimately it was to be Aughawillan's Noel Plunkett who was to be the Leitrim hero as his late, late point secured a dramatic victory.

This video is what the #Gaa is all about, @LeitrimGAA supporters in the Arch Bar, Jamestown listening to @MartyM_RTE as they kick the winning point against New York to set up the #elclasico against Roscommon! You can’t beat the GAA for passion! pic.twitter.com/cDlWFzAsh8

Seamus McDonagh, who fought Evander Holyfield for the heavyweight championship, cheering on his godson and NY in Gaelic Park pic.twitter.com/dy10Zyljp0

Fair play to both @LeitrimGAA and @NewYorkGAA for what looked like a classic in the Bronx. Surely New York’s first championship win can’t be too far away. Serious fight shown by Leitrim as well, who looked dead and buried in extra time #TheToughest pic.twitter.com/4ruOuATVaq

I know everyone is happy for Leitrim but remember the New York sporting public are after witnessing awful seasons for the Giants, Knicks, and Rangers. This loss will hit them hard tonight.

Nothing against New York but delighted for Leitrim. The system is doing them a complete disservice but with everything weighed against them, it would have been devastating to lose that. They have another two games now #GAA

Listening to the New York Vs Leitrim game on the radio was compelling stuff. If the championship remains that exciting we are in for one hell of a year #championship #gaa #rteradio

As a Leitrim native that was too close for comfort. Heroic comeback by Leitrim but New York surely deserve another chance in the qualifiers #LeitrimGAA

Hard luck lads - beat by a point!
Thank you @LeitrimGAA for a fantastic game - best of luck next round #GAA