Carrick the eighth largest labour catchment in the Western Region 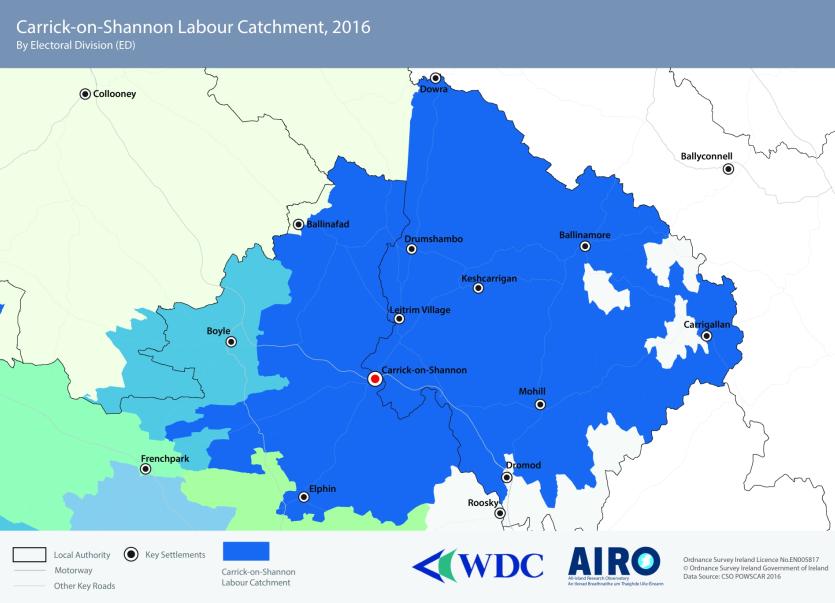 A new report carried out by the Western Development Commission (WDC) examining the labour trends in the Western Region has highlighted the importance of rural areas as employment locations.

The report found that a large proportion of the labour catchment residents are in fact employed in rural areas - centres with less than 1,000 people – depending on the location of the county town and the proximity of nearby urban areas.

The Carrick-on-Shannon labour catchment is the eight largest labour catchment in the Western Region with over 7,700 (7,785) workers living there. This is an increase of over 17% (17.3%) on a decade earlier, highlighting the growth of smaller rural centres.

The growth in the Carrick-on-Shannon labour catchment, with the number of workers increasing by 17.3% over the last decade, is much greater than the growth across the Western Region, which averages 5.9%.

The analysis shows that the numbers living in the catchment of the town is significantly greater than the number in Carrick-on-Shannon itself, approximately 4.6 times as many, highlighting the large labour supply available to the town.

The Carrick-on-Shannon labour catchment covers a relatively small area and is predominantly within south Leitrim and north-east Roscommon.

Female workers account for a larger proportion of the workforce than their male counterparts with rates of 52% and 48% respectively. This gender gap is further extended when looking at those employed within the town itself where much more women (62.9%) than men are employed (37.1%).

Those at work and residing in the Carrick-on-Shannon labour catchment have a much lower level of education than the State average – with rates of 51.9% and 56.1% respectively (3rd level).

Interestingly, those employed outside Carrick-on-Shannon town have a higher rate of third level attainment (53.5%) compared with those working in the town (47.8%).

The single largest employer is the ‘Wholesale, Retail and Commerce’ sector and accounts for 26% (2,021) which is marginally higher than the State average (25.7%).

The ‘Education, Health Care and Social Work’ sector is the second most important employer with a rate of 24% (1,919) and again is marginally higher than the State average (22.8%).

Commenting on the findings, the Chairperson of the WDC, Dr. Deirdre Garvey said:

“This is very valuable information as it provides robust analysis of travel to work patterns in Leitrim and Carrick-on-Shannon. Comparing these data with the original WDC analysis 10 years earlier provides insights into trends. It will be of particular value to policy-makers in the context of Project Ireland 2040 and the development of the Regional Spatial and Economic Strategies informing decisions on commuting patterns and enterprise location.”