Tesco recalls a food product 'due to the presence of salmonella'

Tesco has issued a recall on a popular food product sold at their Irish stores 'due to the presence of salmonella'.
The supermarket chain has recalled a batch of their organic almonds, which has a best before date of February 2019.

Anyone who purchased the product, which is 200g in size and has a batch code of L8004010, is being warned not to consume it and instead, to return it to their nearest Tesco store. 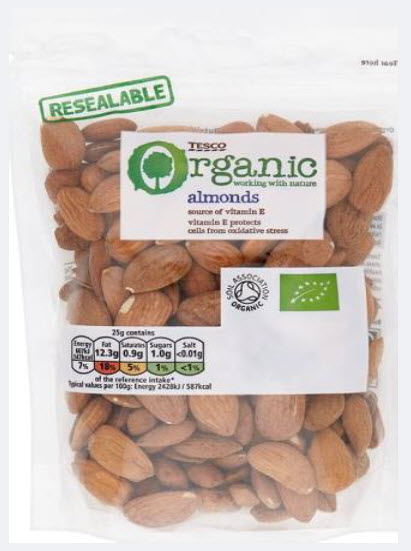 The Food Safety Authority of Ireland issued the warning about the product on their website today.

Their message read: "Tesco Ireland is recalling one batch of its Tesco Organic Almonds, due to the presence of Salmonella. Tesco Ireland has issued in-store notices requesting customers who have bought the implicated batch not to consume it and instead, to return it to a Tesco store."

Salmonella is a bacterium commonly found in the intestines of humans and animals. It can also be found on raw meats, poultry, eggs and in unpasteurised milk.

Salmonella food poisoning (Salmonellosis) is an illness that can occur if live Salmonella bacteria enters the body. The bacteria can attach to the cells lining the intestines where they produce toxins and attack the intestinal cells.

According to the European Safe Food website, the symptoms of Salmonella food poisoning are diarrhoea, cramps, vomiting and fever. The incubation period is from 12-36 hours and the illness 'can be severe and admission to hospital may be necessary'.