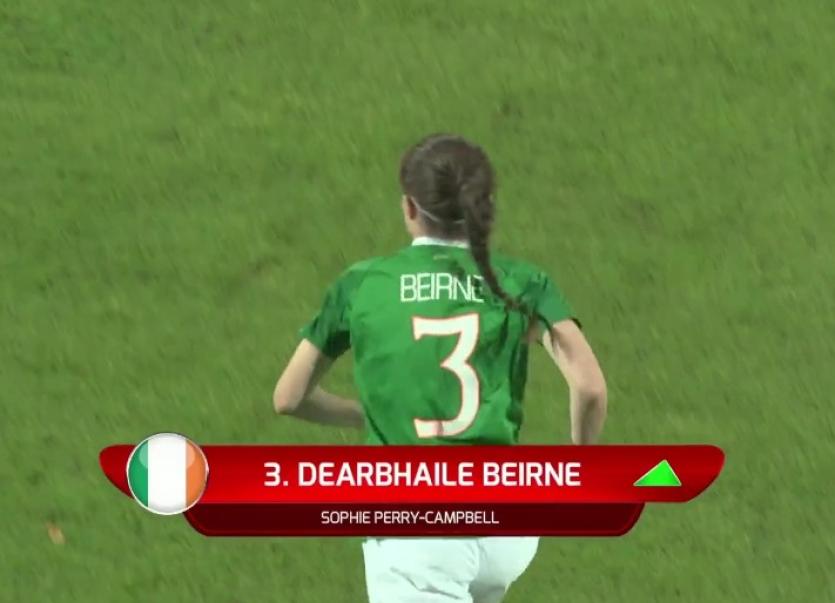 Leitrim's Dearbhaile Beirne is pictured being introduced as a substitute for Ireland in last night's friendly against Poland.

Mohill's Dearbhaile Beirne made her senior international debut last night when she was introduced as a late substitute in Ireland's four goal defeat at the hands of Poland last night.

All of the goals in the 4-0 defeat came in the second-half as Natalia Chudzik (penalty), Gabriela Grzywinska, Ewelina Kamcyzk and Ewa Pajor all scored.

Ireland were missing a number of key players including Harriet Scott and Leanne Kiernan, but performed well in the first-half. Captain Katie McCabe almost gave Ireland the lead just past the half-hour after a neat move saw Rianna Jarrett find the Arsenal star, but she fired wide.

Ireland were hit with another blow early in the second-half as Wexford Youths striker Jarrett went down with an injury and was replaced by Shelbourne Ladies youngster Jessica Ziu. Shortly after, Poland took the lead.

Diane Caldwell was adjudged to have fouled Pajor in the area and Chudzik slotted home the resulting penalty, past substitute goalkeeper Grace Moloney in the 54th minute.

Poland continued to grow into the game and doubled their lead with a stunning 35-yard strike from Grzywinska, whose shot arrowed into the top right-hand corner with 20 minutes remaining.

In the 73rd minute, Kamczyk finished from close range before striker Pajor added a fourth with 10 minutes remaining to condemn Ireland to defeat.

"I thought we were very good in the first-half, carried a threat going forward and we were really well organised," said WNT Head Coach Colin Bell.

"But the second-half was the worst 45 minutes of football I've seen in my time as Head Coach. Diane dives in to give away a penalty, something she didn't need to do and then our organisation, our heads, went completely out of the window.

"We made individual mistakes and completely lost our organisation. Yes, we're missing players tonight but we don't expect to concede four goals, that's not what this team is about and we need to ensure that doesn't happen again.

"The second goal is obviously an incredible goal but the final two goals are basically counter-attacks where we leave ourselves completely open. The positive is that we had a number of young players come on this evening and did really well. Emily Whelan, Jessica Ziu and Zara Foley are future players for this team and I'll be working with them in the future.

"It's a really disappointing result and we expect more."

WNT Head Coach Colin Bell also confirmed striker Rianna Jarrett is set to go to hospital for a scan on an ankle injury she sustained as a precaution.