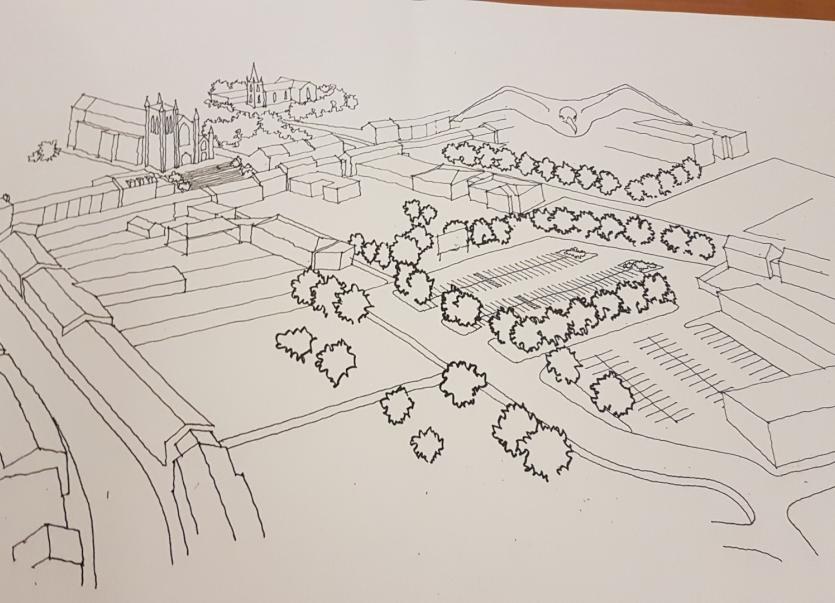 A large crowd attended the information evening on Thursday, January 9 and there seemed to be an overwhelming positive reaction to the new streetscape, with only the reduction of about 50 car parking spaces from the town centre the real sticking point.
Leitrim County Council and DHB Architects unveiled the plans, with senior planners and Council staff on hand to provide details.
The €8.67 million approved redevelopment plan is expected to begin this year as Leitrim County Council has been allocated €2.899m to spend in 2019 under the Urban Regeneration and Development Fund.
The total funding will be spent over a three year period commencing this Autumn.
The Public Realm Improvement Scheme will see a major enhancement of Main St, St George's Terrace, the Quay and also Leitrim Road, Priest's Lane and Church Lane.

Highlights
The stand out parts of the plans include a 105 car park spaces in Flynn's Field with pedestrian access onto Main St, widening of footpaths and the re-paving of the streets as "shared surface space" eliminating different levels between footpath and roadway. 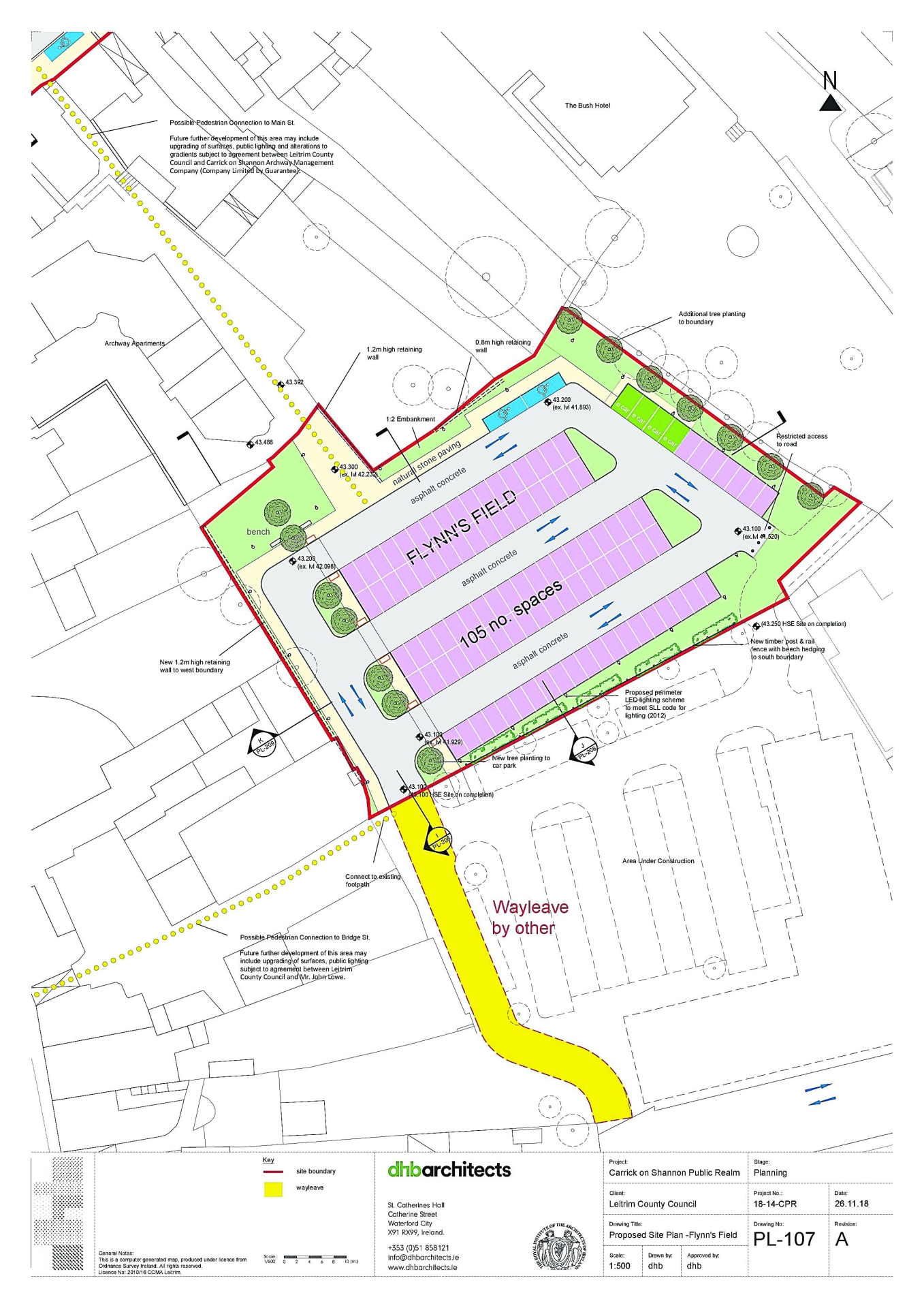 According to the drawings footpaths and roadways will only be differentiated with different paving - it will mostly look like a pedestrian area/ large civic area but will be open to traffic.
There will be new street lights and more greenery with trees and landscaped areas as well as street furniture.
There will be a reduction of approx 50 street car parking spaces taken from Main St, St George's Tce, Bridge St and the Dublin Road.

Leitrim County Council believe this reduction will be more than made up for with 105 new spaces available at the new paid car park known locally as “Flynn’s Field” to the rear of the medical centre currently under construction.
Pedestrian access to this car park will be made onto Main St and Bridge St.

It is understood that the traffic entrance to the new public parking site (marked Wayleave by other on the map) will be also used by traffic using the Primary Health car park also. The Council will have a “right of way” through the privately owned site.
As part of the proposal, the Town Clock, a protected structure will be moved approx 2 meters from its current position so that it is visible from Main Street, Bridge St and St George’s Terrace. 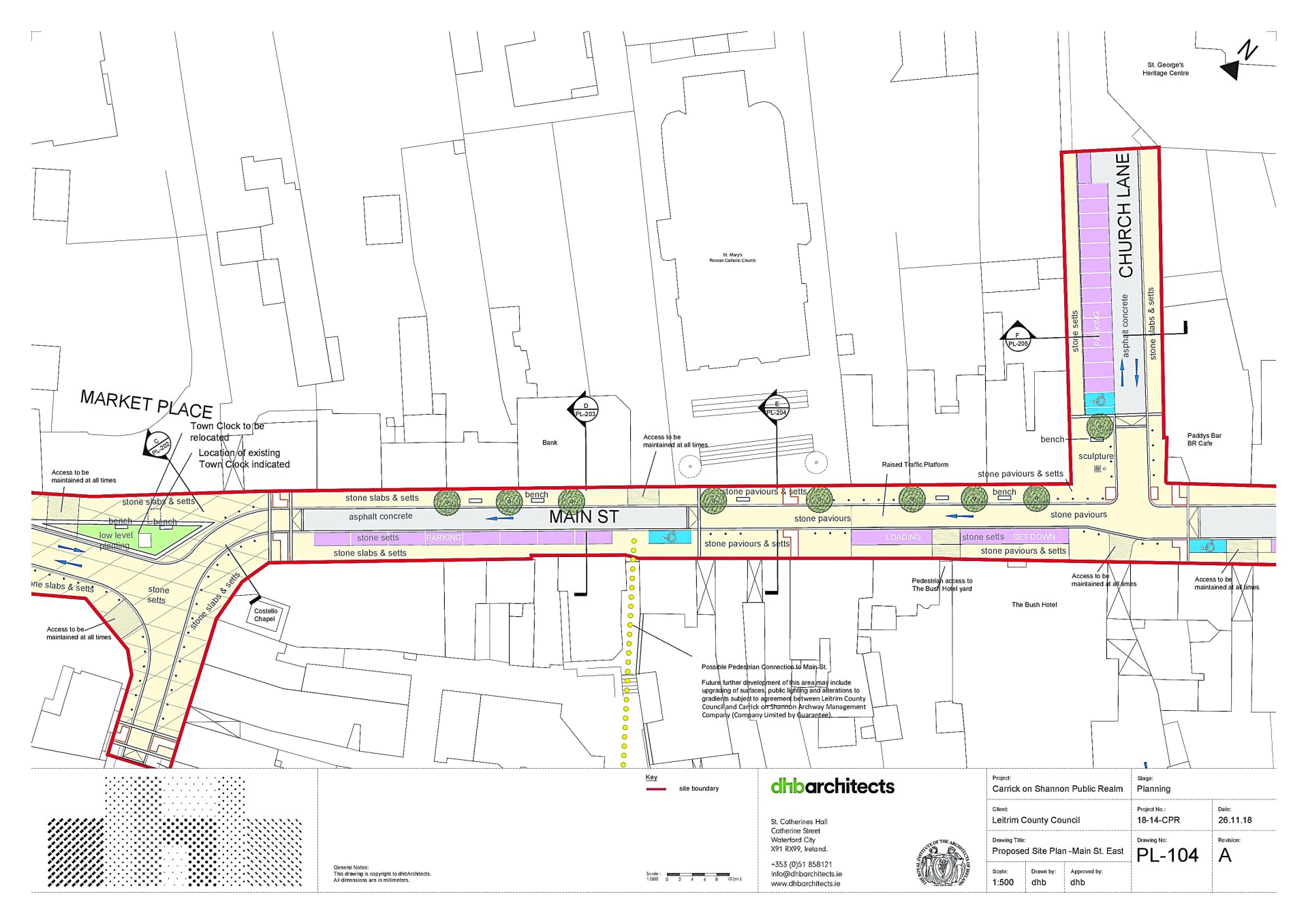 The existing fixed boardwalk along the River Shannon will be removed and replaced with a public floating boardwalk (similar to the one in Drumshanbo) which will connect to the car parking area at the quayside and on to Quay Road.
At the junctions on Priest’s Lane and the Leitrim Road pedestrian crossings will be raised to give them priority.
The council also noted that Carrick-on-Shannon Library is expected to be redeveloped shortly also enhancing Priest's Lane.
The proposed plans were unveiled to Carrick Town Team (businesses) last week also.

Anyone who wants to make a submission or observation on the Part 8 proposal will need to do so in writing before 4pm on January 31. Clearly marked ‘Carrick-on- Shannon Public Realm Scheme, Part 8.’
The proposed plans do not require an Environmental Impact Assessment.
A council spokesperson told the paper that some small details could be changed but large scale changes are not possible since the project is already funded.

Some finer details to be confirmed

The massive visual change to Carrick-on-Shannon will be the use of stone pavements and slabs. However what type of stone to be used has yet to be confirmed. 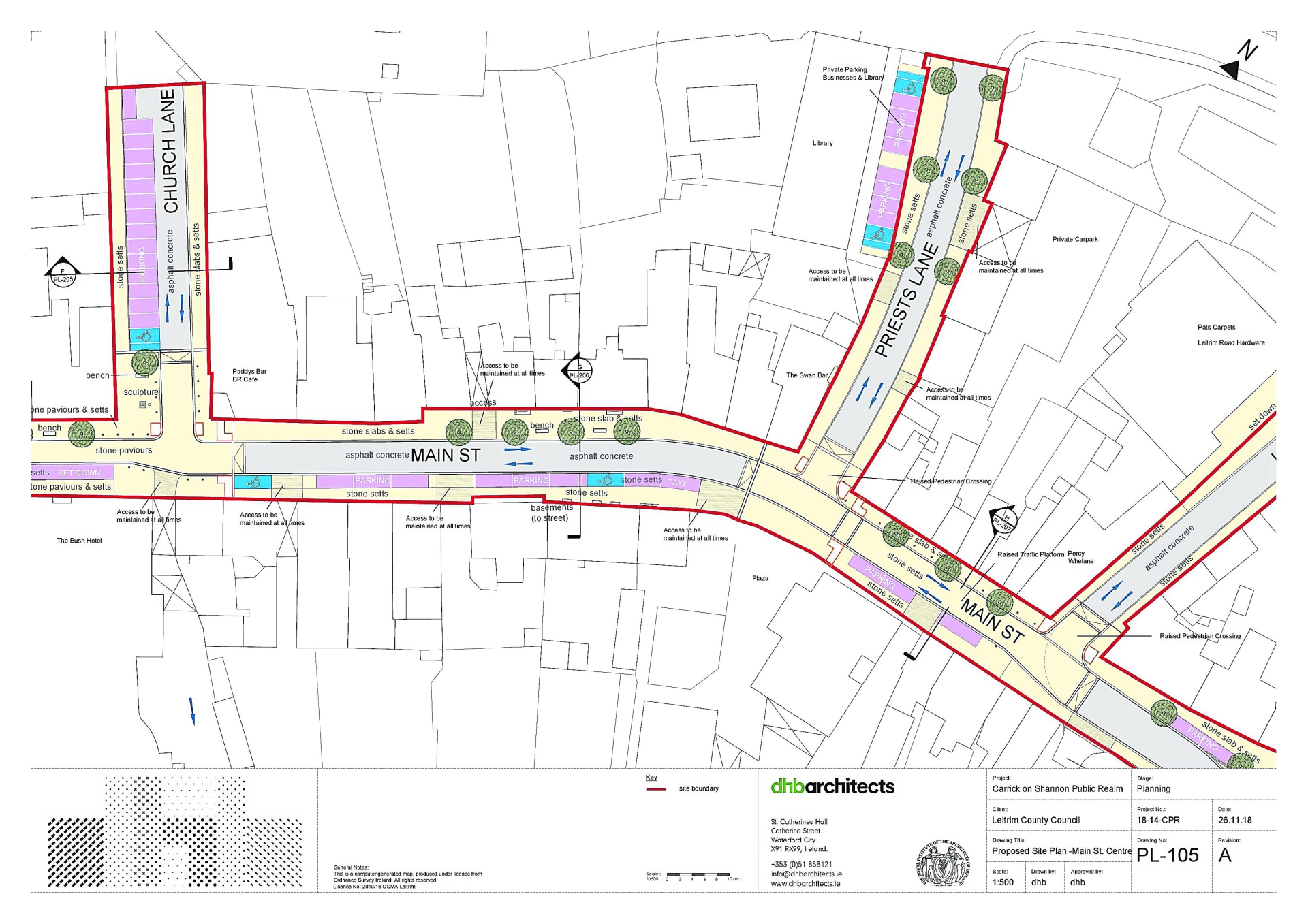 It is understood that a study will be undertaken on local stone types to see how suitable they are for long term wear and tear. Carrick -on-Shannon has numerous locations where natural stone is used. Within the Old Jail, St. Georges Terrace and surroundings areas much of the old walls are built with a combination of a Yellow walling stone and ashlar.
The architects said, “Choosing a local stone, if it is available economically, is an obvious starting point, but several types of surface will generally be required, including asphalted carriageways for vehicles. The extent and nature of the finishes will need to be carefully balanced against budgetary limits.”

The pattern of the stone slabs has also not been fully decided. Carrick is also about to get a lot greener with a significant number of trees to be planted along the main streets and a few more landscaped green areas with low shrubbery.
However the species of trees to be used has not been specified and will form part of the finer detail to be completed early this year.

Also read: Carrick's new Primary Care Centre to be operational by the end of 2019