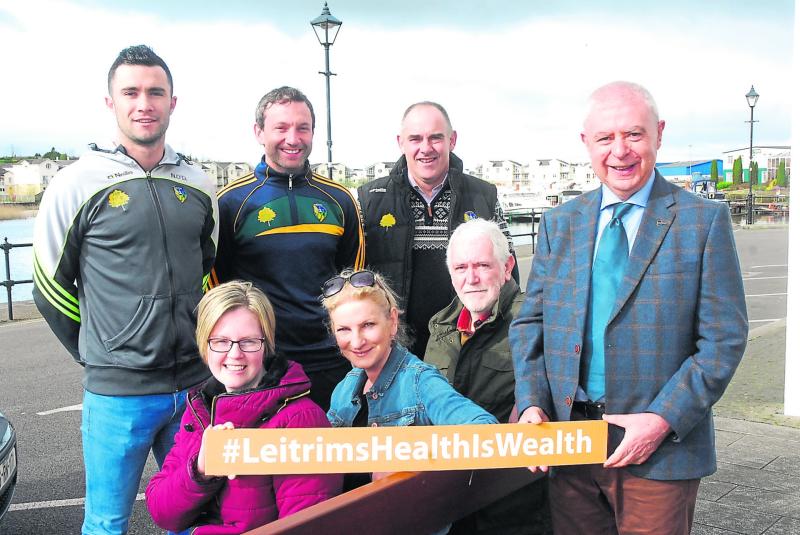 Pictured at last year's launch of Leitrim's Health Is Wealth.

Following on from the phenomenal success of the first Leitrim's Health Is Wealth event, organisers, Hubert McHugh and Valerie Cogan, have confirmed details of the line-up for 2019.

This year the master of ceremonies is none other than well known Leitrim man, journalist and broadcaster, Paul Williams. Paul, who is a household name and former Leitrim Person of the Year, will be leading the discussion at the event in the Bush Hotel, Carrick-on-Shannon on March 27, 2019

Speakers contributing on the night include Adi Roche from Chernobyl-Ireland who will be speaking about her years of volunteer work. Alan Quinlan, former rugby international and journalist. Alan will be talking about his own experience of depression and also his recovery from this. Kristen O’Reilly, a local girl, who was bereaved of both her parents as a teenager. She will be talking about resilience and how to cope with adversity. Mikey Drennan, former Aston Villa, Sligo Rovers and presently St Patricks Athletic soccer player, discusses his experience of depression, gambling and isolation. Professor Geraldine McCarthy – Consultant Psychiatrist with Sligo/Leitrim Mental Health Services will be discussing healthy ageing and local initiatives. John Lonergan, former governor of Mountjoy Prison will be discussing his observations of human nature and of Irish society and finally, Angela Hayes, founder of the Thomas Hayes Trust whose family has been bereaved by suicide.

There will also be a guest appearance on the night by Eurovision winner, Charlie McGettigan.

This is the third year of Leitrim’s Health is Wealth. This free event has grown from strength to strength in that period and there is a huge appetite from local communities to embrace this initiative.

The event will be launched in two venues this afternoon in Dublin. The first launch will be held at Croke Park at 12.30pm and this will be followed with a second launch at Leinster house, Dublin 4pm.

Journalist and author, Paul Williams, will be MC for Leitrim's Health Is Wealth 2019. He  will be there at this afternoon's launch events along with Terence Boyle, Chairperson of Leitrim GAA County Board; Dr Owen Mulligan,Clinical Director of Sligo/Leitrim Mental Health Service; John Travers, former chairperson of the Leitrim Peoples Association in Dublin and former Leitrim County footballer; Charlie McGettigan, Eurovision winner and event organisers Valerie Cogan and Hubert McHugh.