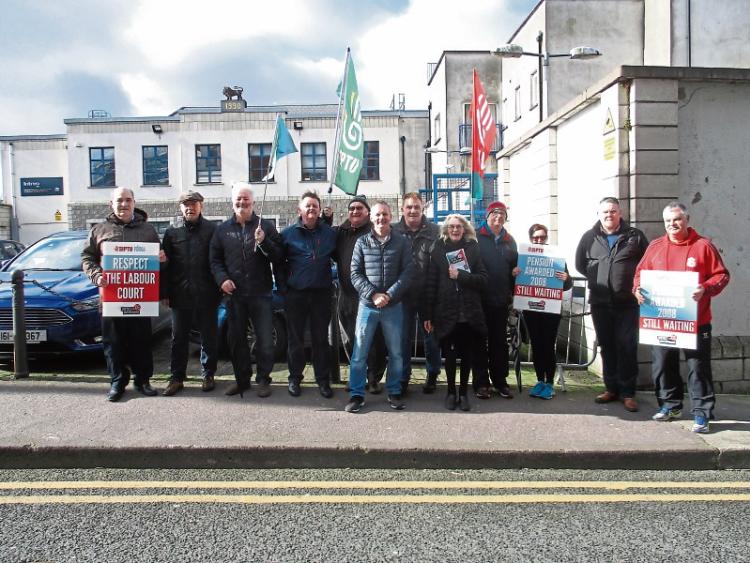 Some of the of the CE supervisors who took part in a rally in Dublin last Tuesday.

Community Employment (CE) Supervisors announced, at a rally outside Dáil Éireann on Tuesday, April 16, that they will strike for five days in May if the Minister for Finance, Paschal Donohoe, does not meet their trade union representatives to discuss a 2008 Labour Court recommendation concerning their right to a pension.

The five day strike, from Monday, May 13, will impact on community employment schemes across the country including those providing childcare, elderly-care and drug rehabilitation services.

At a press conference in Buswell’s Hotel, Dublin 2, prior to the rally by over 250 CE Supervisors, Kate Campbell, a CE Supervisor in county Donegal, said: “Escalating this dispute will have a devastating effect on both our CE scheme participants and the communities in which they work. Participants will not get paid and progress in community schemes will be halted due to the lack of supervisory management.”

Conor Mahon, a CE Supervisor in Galway, said: “We are in this situation because of the Government’s refusal to respect a recommendation of its own industrial relations mechanism. In 2008, the Labour Court ruled that, as the funding agency was a statutory body, the Government had responsibility for our pensions.”

He added: “I and my colleagues do not wish to see our schemes adversely affected by our industrial action. However, we have been left with no choice, after 10 years of waiting for the Government to do the right thing, but to bring this dispute to a head. Our request is simple. Paschal Donohoe must meet with our union representatives and resolve our pensions issue.”

Fórsa Services and Enterprises Head of Division, Angela Kirk, said: “We have contacted the Minister for Finance, Paschal Donohoe, requesting a meeting to discuss the implementation of the Labour Court recommendation.

“To date neither the minister, nor his officials, have responded to this request despite the provisions established as part of the Lansdowne Road Agreement to establish a high level forum to deal with the issue of pensions for CE Supervisors and other matters relating to the community and voluntary sector.”

SIPTU Sector Organiser, Eddie Mullins, said: “Paschal Donohoe should respect these workers and the vital community services provided by their community employment schemes. He must meet with their representatives to discuss why after more than 10 years they still do not have a pension.”