Save Leitrim hold rally outside first meeting of new council 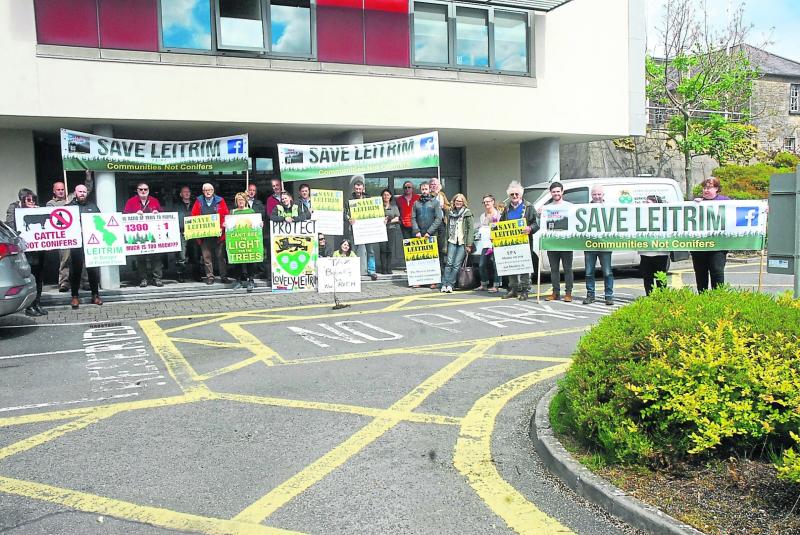 A rally aimed at highlighting ongoing concerns over what has been described as the 'blanket afforestation of Co Leitrim', was held outside the first meeting of the newly elected Leitrim County Council last Friday.
More than 30 people attended the rally at the council offices at 11.30am on June 7.
Speaking after the event, local councillor and Save Leitrim member, Justin Warnock said “our presence at the rally was just to keep the focus on forestry in this county.
“This is a serious issue affecting much of Leitrim and we need to keep it centre stage in the minds of the new council,” he said.
The Manorhamilton Municipal District representative said that it was crucial that public representatives deliver a new County Development Plan this term which is focused more on communities, local small enterprises such as farms and the environment rather than on big business interests.
Cllr Warnock said he and other members of Save Leitrim are continuing to attend forestry appeals in Portlaoise and vowed to continue to fight at all levels to ensure that forestry is “not only held to account for the damage it does” but to also ensure that communities aren't “inundated by blanket plantations of Sitka spruce”.
He hoped that Leitrim County Council will take a more proactive role in opposing forestry in Co Leitrim.
“It is not enough to make a submission. The council must take a more proactive role with objections to forestry and they have to send staff down to give evidence at these appeals,” said Cllr Warnock.
“They have to stand shoulder to shoulder with the people of Leitrim and if they raise concerns about plans to plant an area, they must follow through and argue their case at the appeals.”

Cllr Warnock said Save Leitrim will “continue to fight” and would bring appeals “as far as possible to ensure Sitka spruce doesn't take over our county.
“No one wants to look out on a sea of non-native trees, we want to see people and thriving communities, that's what we need,” he pointed out.