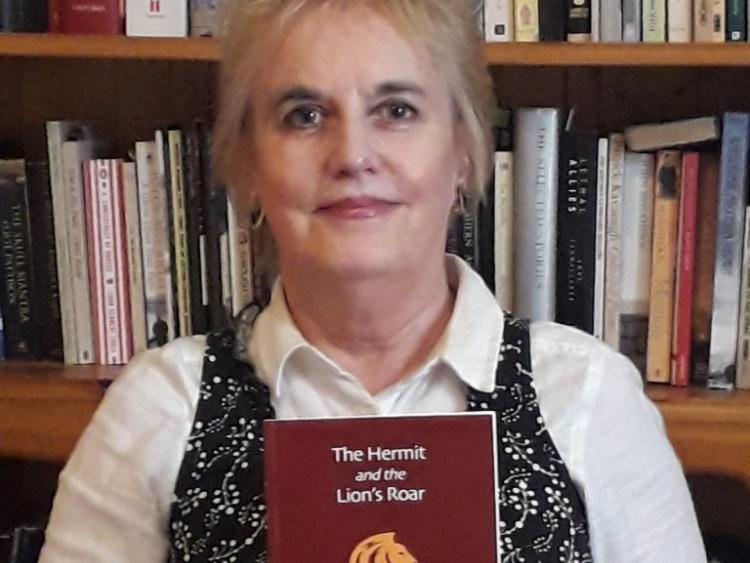 Anglea McCabe with her newest publication

The Ballinamore poet will launch her new collection entitled The Hermit and The Lion's Roar at the back of the Natural Healing Centre in Ballinamore on Saturday, August 10.

Angela has been a social worker, a psychologist, a cordon bleu chef and a textile artist at different times and in different parts of the world.
After gaining an Honours Degree in Fine Art at The University of Ulster, Belfast, she did an MA in Painting and Performance Art at the University of Hertfordshire. She lived and worked in a Tibetan centre in Scotland where she studied Tibetan philosophy and Eastern Art. She continues to work for a Tibetan charity.

Angela is the 2016 winner of the Listowel Poetry Collection Competition. Several of her poems have won prizes and have appeared in various anthologies and literary magazines, as have some of her short stories. Angela has also written screen plays and made an award winning short movie.
Dowra poet and founder of The Poet’s House, Janice Fitzpatrick Simmons has massive praise for this new collection: “Angela’s lyric travels easily between the political and social landscape of Ireland in the 1960s and 70s and Buddhist thought and practice. It negotiates a space between conflict and meditation... The poems are alive with an old music of wonder.”

One of the poems in the collection is Tom Jones 1966:
“Girls in mini dresses/throw our knickers at him...We are ready to stampede him/kiss him all over and eat him up.
‘Tom Jones, Roy Orbison, Sandie Shaw, Marmalade, and Amen Corner came to Ireland in 1960s. I danced to them all. My boyfriend and I were in love. Everyone was in love We sang along with the lyrics:
If paradise is half as nice as heaven that you take me to. Who needs paradise, I’d rather have you. Amen Corner.”
Angela tells the Leitrim Observer, “Everyone knew the words to songs in those days. We sang our hearts out.”
The poem in the collection The Hermit and The Lion’s Roar ends with the song The Lion Sleeps Tonight by the Tokens, first released in 1961 and recorded hundreds of times since.

“Living opposite Trathnona in Ballinamore I have a poem called Trathnona Tree - a tribute to those who live there and who have lived there. Having had the privilege of coming to know some of the characters of Leitrim I have been able to pay tribute to them in poems like: Children of Prague, John Fox, Reflection, Talking to Bernadette, Samhain, Celtic New Year and Time of the Dead.
“There are poems about my mother who lived happily with me in Ballinamore for almost 15 years. She passed peacefully in 2010 at 95. She loved Leitrim and the people and made good friends here,” Angela recalls.
Angela's poetry manuscript was read by one of America’s most celebrated poets Prof Abayomi Aminashaun of Wisconsin University USA who says of the Angela's poem Peggy Mother is “downright hilarious!”
Abayomi also says: “Angela is unafraid to go into those tough spaces that leave most of us afraid and awake at night. There’s so much range in this collection, so many themes and throughout all are well handled. There are bold movements between stanzas and subtle turns’in poems. The sheer humanity that informs this work makes me want to travel, meet people, and learn more about the world. I’m in awe of Angela’s gifts.”

Angela continues to lead a cross-border writing group and mentors on one to one. She is completing her fourth poetry book to be published by Salmon Press in 2021.
She has written a children’s story for Christmas and continues to work on her memoir. This year alone she has published two booklets of poetry with paintings and drawings.

Angela tells the paper, “I have lived and worked in many different parts of the world, Leitrim is the longest I’ve lived anywhere, even longer than my native Tyrone. The poem Border perhaps gives one of the explanations.
“In the South, freedom to dance and sing/till three in the morning in The Mucky Duck/Men in three piece suits, women in flouncy dresses/Rock n Roll. Jive. The Twist/The last dance an old time waltz to Lovely Leitrim.”
Angela wishes to think Leitrim Arts Office and Creative Frame Leitrim for their support.

Everyone is welcome to attend the launch of the poetry book on Saturday, August 10 at 8pm. Angela will be signing copies of the book.