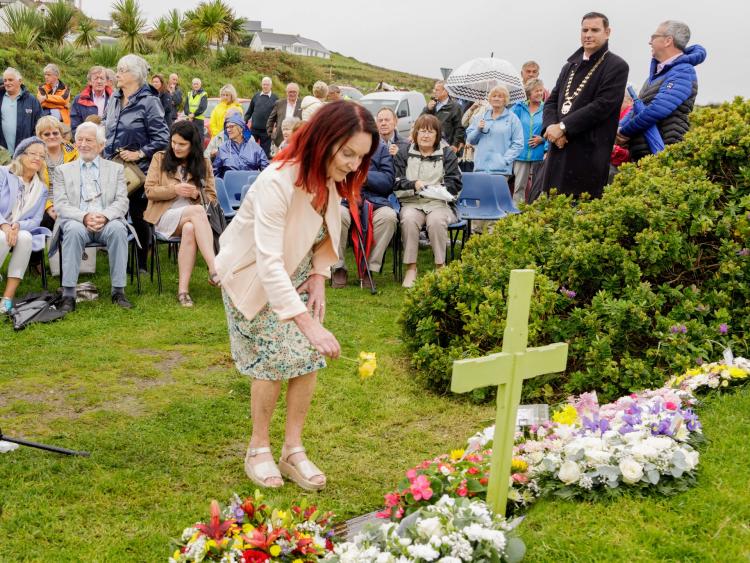 The parents of a teenage boy who was killed in the Mullaghmore bombing in 1979 said this week’s 40th anniversary memorial service will help them in their grieving.
The sound of the wild Atlantic waves created a sombre atmosphere as a crowd of 250 gathered on a high cliff top to remember Lord Louis Mountbatten (78) Paul Maxwell (15) Lady Brabourne (82) and Nicholas Knatchbull (14).
They lost their lives when an IRA bomb ripped through a boat skippered by Lord Mountbatten on August 27, 1979 - 40 years ago this week.
Paul Maxwell’s parents, John Maxwell and Mary Hornsey were among those in attendance at Tuesday’s beautiful memorial service.
John said it was a very emotional day for the family “but it was great to see so many people out here today in support
“If we share grief it helps a lot”.
Recalling that fateful day he said he was “sitting at my cottage when I heard the explosion and I kind of knew what it was as I knew where the boat would have been at that time.
“Paul loved the sailing and the people of Mullaghmore are terrific and I have a lot of time for them. I come back here quite a lot”.
He declined to comment on those who had carried out the atrocity.
The tragic teenager’s mother Mary Hornsey said it was “wonderful that the community organized this service”.
“It has helped us as it shows love and support for our family and we appreciate that.
“A friend of Paul’s who is now 55 were best friends and he has never had another best friend since Paul died”.
She added: “When Paul died we selected a Celtic cross in the Protestant area of Breandrum Cemetery in Enniskillen unknown and that was our way of saying to the people of Sligo and Ireland, we forgive you”.
“I would ask the political leaders to think about the people and not their parties, doing what is best for the people”.

Intimidated
The people of Mullaghmore would not be intimidated in the wake of the bomb 40 years ago, that put the village on the map for the wrong reasons.
That was the ringing message from Tuesday’s event.
A soft summer rain bathed those who attended, as Archdeacon Isaac Hanna from Drumcliffe told the crowd that the “events of 40 years ago were hard to imagine as we look out over this scene and yet it speaks to us of innocent loss.
“It speaks of a time when horror visited this coastline and a time of confusion.
“It also speaks of a time when a community rallied around those who had lost loved ones.
“This community stood with this family and the victims and all those affected to say this was not done in our name.

Great comfort
“We stand with you and there is great comfort and strength from knowing that you have this support in this place at this time
He added: “Through the midst of trouble, confusion and heartbreak the community here have shown their love for you.
“Fear can have a stifling effect on those who are coerced or intimidated in any way.
“Perhaps that was the intention on that day, but the opposite has been the effect.”
The Archdeacon said fear could also be a healthy thing.
“You and I know what it is like to grow up in a land where peace was something that we could not take for granted.
“But when peace did come, it came with relief, it was welcomed.”