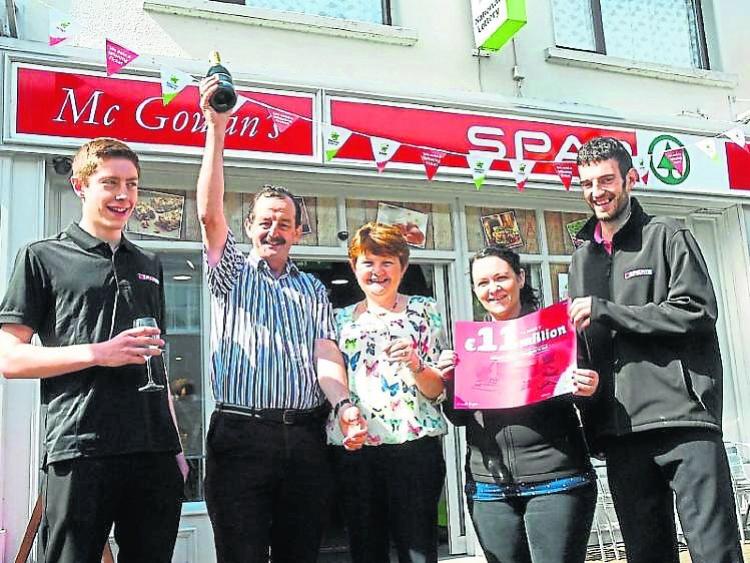 A small convenience store in the centre of a North Leitrim village is fast becoming a lottery gold mine for the 1,000 inhabitants of Kinlough, following Sunday’s €1 million Daily Million top prize win. Since 2006, the lucky Spar store has amassed National Lottery top prize winning tickets to the value of almost €13 million.

The National Lottery is now appealing for all its Daily Million players in Kinlough, Co. Leitrim to check their tickets after they matched all six lucky numbers to win the €1 million prize on Sunday’s 2pm Daily Million draw.

The owner of the lucky Spar store in Kinlough, Noel McGowan hit national headlines in August 2016 when he sold a winning Lotto ticket worth €11.1 million which was finally claimed by a syndicate from Co. Leitrim.

Speaking after learning of his latest €1 million win this morning, he said: “It’s absolutely incredible that my customers in a small village such as Kinlough are famous for hitting National Lottery jackpots. For such a small population, we have defied all of the odds already but to have another customer who has become a millionaire over the weekend is really special for us. Following the last couple of big wins, we’ve had quite a few tourists visit the store to specifically buy a lottery ticket in the hope that our luck might rub off on them. The majority of our customers are local however so we have our fingers crossed that the winner is somebody from the village,” he said.