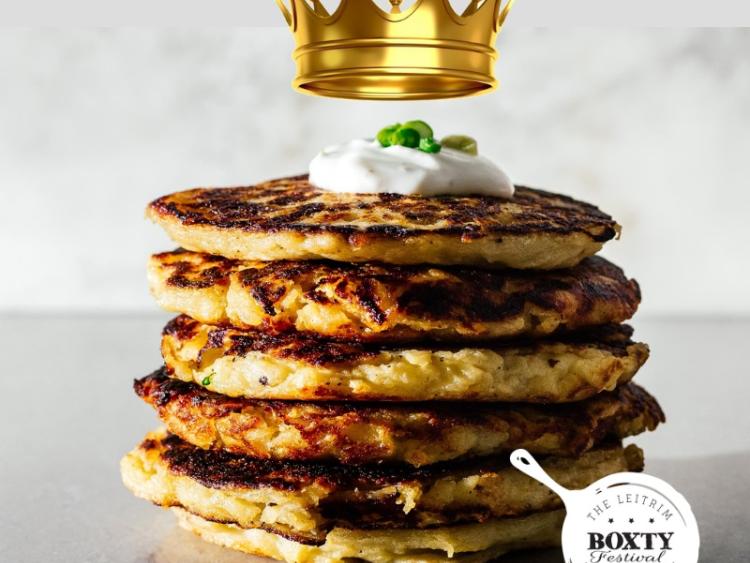 Boxty is an integral part of Leitrim’s heritage and culture.

It is something that is dearly missed and yearned for by our family and friends who have moved abroad. Boxty recipes are often family secrets which have been passed on from generation to generation with pride.
It is usually mammy's or our grandmother's recipe that they most yearn for.

The long awaited inaugural Leitrim Boxty Festival will take place on Saturday, October 19 in The Dock, Carrick-on-Shannon.
As part of this festival Leitrim’s Best Boxty Makers will be crowned. If you inherited the family recipe and you believe that it is the BEST BOXTY, we invite you to enter.
The new festival has teamed up with Leitrim Boxty producers – McNiffes Boxty and Dromod Boxty, both famous for their recipes including pan, boiled, loaf boxty and potato cakes and potato bread! They know a thing or two about our beloved dish.
There are two categories in the competition: Best Traditional Boxty and also Best Boxty with a Modern Twist!

If you are 15years or older and are the holder of the family boxty recipe or if you have just recently discovered just how tasty and versatile Boxty is… we invite you to enter the competition as we search for Leitrim’s Best Boxty Makers 2019!
There has been a great response to the competition so far, so don’t delay in entering as we expect this to fill up fast.
The Boxty Making Competition will be held in The Food Hub, Drumshanbo on Saturday, September 28 with the winner of both categories announced at the Leitrim Boxty Festival in The Dock, Carrick-on- Shannon on Saturday October 19. (Terms & conditions will apply)

To enter complete the entry form and post it to; Leitrim’s Best Boxty Makers 2019, The Leitrim Observer, The Courtyard, Carrick -on-Shannon or email your full name, email address, contact number, date of birth and your category of choice - Traditional Boxty or Boxty with a Modern Twist to leitrimboxty@gmail.com or message on FB/LeitrimBoxtyFestival
Also join in the #BoxtyBanter on Facebook - where Leitrim people all over the world are sharing their boxty memories.

Leitrim Boxty Festival
On October 19 Leitrim celebrates our heritage dish through music, song and dance and some great fun potato art!
View the exhibition of Folklore Essays, read the archives, see the paraphernalia relating to Boxty making, its customs and traditions.
Join the food trail for breakfast, lunch or dinner and discover Boxty Re-imagined in the many cafes and restaurants in Carrick-on-Shannon.