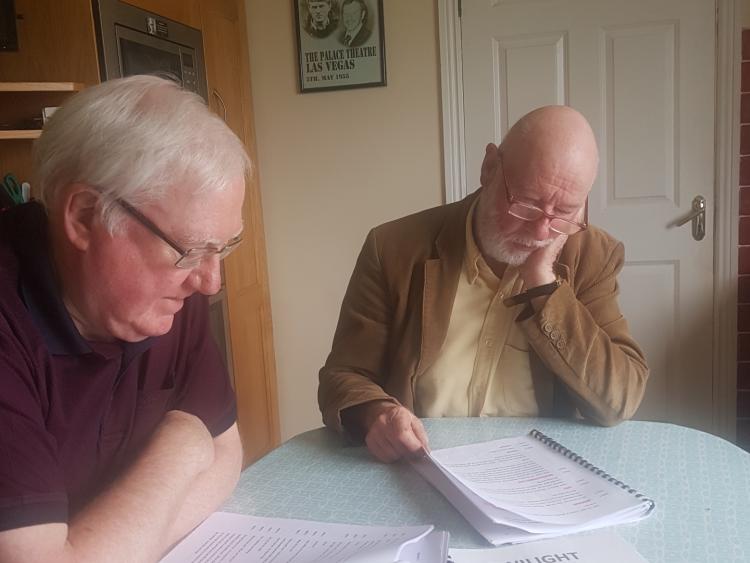 Over the years, Carrick-on -Shannon has hosted the premieres of many John McDwyer plays including the highly acclaimed Lovely Leitrim, Callaghan’s Place, Unforgiven, An Ordinary Man and, most recently, Turning Mammy.

Now, patrons of The Dock get the opportunity for a first look at his latest work when Twilight opens there on Monday, October 21 and runs for four nights.
These are the only performances planned for this play at this time.

The author describes Twilight as a play which demanded to be written. “I was in the writer’s retreat in Annaghmakerrig working on a completely different play and, after a morning’s work which had gone particularly well, I repaired to the kitchen for a snack. By the time I returned to my desk the idea for this play was flying around my head so I dropped everything and wrote a first draft.”
Twilight is a departure for McDwyer and he says the play is probably closer to An Ordinary Man than to any of his other work.
“I suppose,” he says, “as I get older, I become more reflective and this play deals with the issues of ageing, parenting and friendship.”
While there are certainly McDwyer humour fingerprints on the play it is, in essence, a very serious piece which will give much food for thought.

Two friends, who haven’t met for over 35 years meet for coffee on the balcony of a hotel. Why have they not met for all this time and why are they meeting now?
Through a series of conflicts and negotiations, the two friends, the reason for their estrangement revealed, finally appear to find common ground from which they can move on. Or do they?
“It’s not unusual, when I am writing a play to hear a certain actor’s voice in the script and this happened with Tom Walsh and this play and I was certain that I wanted to play the other role myself.”

This fact affords The Dock audiences the opportunity to see two All-Ireland winning actors on stage together. Tom won his award with The Phoenix Player’s production of The Communication Cord and John for his portrayal of Frank in Educating Rita for the Breffni Players.

Box office is open at (071) 9650828 or www.thedock.ie
Meanwhile, John McDwyer says he will return to work on the other play as soon as Twilight run its dates.