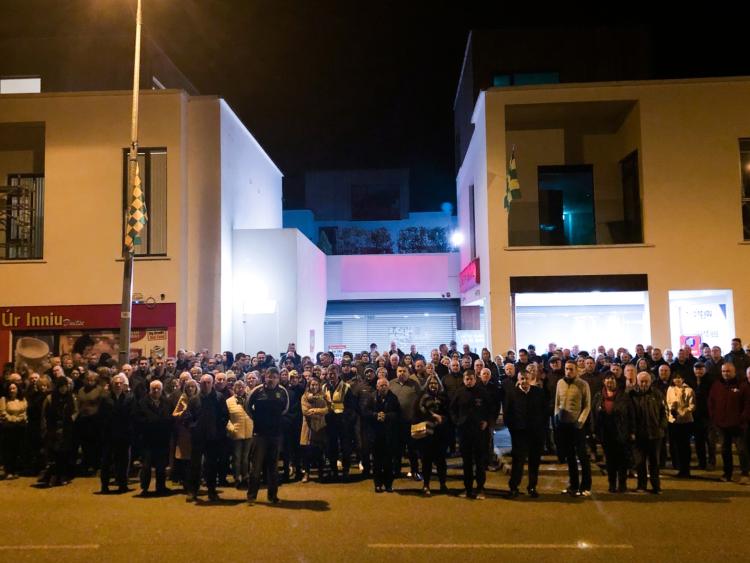 Residents standing together outside of The Rock Quarter, Ballinamore last night, Sunday October 20

A crisis meeting was held in Ballinamore last night where townspeople showed up to stand together and express their "grave concerns" about the re-housing of 130 asylum seekers in newly refurbished apartments.

In a statement the group of about 200 people said they welcome all people to the town, but they point out  that "Proportional norms, when it comes to the resettlement of refugees or asylum seekers, is recognised as being between 1 and 2% of population. The numbers being considered for Ballinamore exceed 15%."

"The wealthy investors who back these projects and supply social infrastructure to the state have no concern for either the people in provision centres or the communities in which they are placed. The people of Ballinamore were the last to know of this proposed relocation and were informed of the plans after a contract was signed between the developer and the Department. There has been no public consultation on this matter whatsoever. The deal was done and then the people were told."

The spokesperson for the group said "Let us be clear, there are only two types of people who are not welcome in Ballinamore; Racists and People Traffickers whose aims are to maximise profits on the backs of those less fortunate."

They are calling on the Department to halt these proceedings immediately and to listen to the people of Ireland and "re-evaluate its policies on provision centres across the country."

A meeting will take place on Thursday this week, in Leinster House Dublin, with community and political representatives from Ballinamore Co Leitrim and Minister David Stanton along with Government officials.

The meeting will discuss concerns for services in Ballinamore, arising from the provision of asylum seeker accommodation in the town.

Sinn Féin TD Deputy Martin Kenny organised the meeting and said officals from Justice, Education and the HSE will attend and deal with concerns and pressure on services.

Deputy Kenny said, "I expect that some clarity will be forthcoming from the Government on the number of families and arrangements with schools and childcare facilities etc. There was a desire expressed at the Wednesday night meeting, that these families would come on a phased basis and I have been assured that that will be discussed.

"I have also been made aware of a €50,000 grant to assist with community facilities and integration of the new people into the area.”

Also read: Gardai investigate criminal damage to building in Ballinamore over the weekend