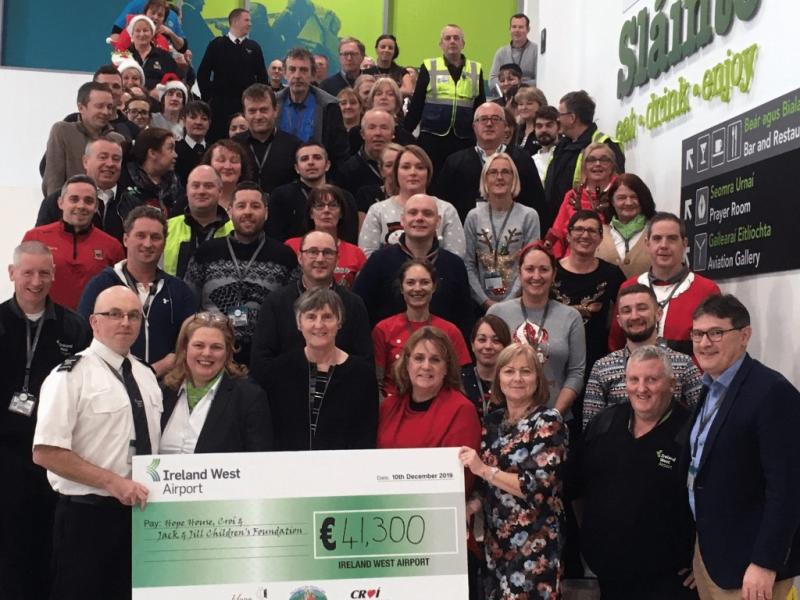 Pictured presenting a cheque to the three airport charities for 2019, Croi, Hope House and The Jack and Jill Foundation were staff from Ireland West Airport

Ireland West Airport staff were delighted this week to present a cheque for €41,395 to the airports three staff nominated charities for 2019 – Croí, Hope House and The Jack and Jill Foundation.

Over the course of 2019 a number of events took place with Ireland West Airport employees getting involved to support the three charities.

The most successful fundraiser in 2019 was the annual Portwest 5km Runway Run, which saw over 1,200 people take to the airports runway in March.

This year was a particularly memorable year for the Runway run as it was the last time a run took place on the runway before it was resurfaced over the summer.

The famous runway, which was built in the early 1980’s, has welcomed over 10 million passengers and this years run was a historic one for those taking part.

The other major fundraiser was the airports bumper online charity draw in partnership with our three charities, which took place in August, and offered fantastic prizes such as All Ireland Final tickets, Ireland Rugby tickets and flights to Cologne and Tenerife from Ireland West Airport.

There was a fantastic response by the public and the draw raised almost €10,000 for the three charities.

In addition all donations left in the charity boxes in the various locations at the airport by passengers throughout the year contributed to the significant funds raised for the three charities in 2019.

Speaking at the cheque presentation, Joe Gilmore, Managing Director, Ireland West Airport, said ‘2019 has been a memorable year at the airport as we look forward to celebrating record passenger numbers and the completion of a number of facility enhancements and improvements.

This year is the fourth year of our charities of the year initiative and we are delighted to be presenting a cheque to the three charities, for a record amount of €41,300, which will make a significant contribution to the great work been done by these charity organisations. I am very proud of the continued support and commitment of our own staff in raising significant money for their nominated charities every year and would also like to express our gratitude to our customers, who so generously contributed to the charities through their donations in the charity boxes at the airport.

The fantastic work that these charities all undertake really does make such a difference to the people that they support in our community and we look forward to a successful year of fundraising with three new charities in 2020’.

Neil Johnson, Chief Executive, Croí, the Heart and Stroke Charity commented: "We are so grateful for this incredible support. These funds will go towards our community work in Co. Mayo as part of our Croí Third Age Programme, changing lives through healthy ageing. Thank you to everyone who contributed and special thank you to the staff at Ireland West Airport for choosing Croí as one of the 2019 charity partners."

Claire Sheeran, The Jack and Jill Foundation said: "We are delighted to have been presented with this fantastic donation. Over the last 12 months, Ireland West Airport has helped secure over 850 home nursing care hours for our 45 sick children currently living in Connaught.

"This generosity and commitment from Ireland West Airport Staff & visitors makes such a difference for our families. The Jack & Jill Foundation must raise over €3.5 million per year to fund what families call ‘the Gift of Time’. Time to get a nights sleep, go for a walk or take another sibling to a local match all the while knowing that their very sick child is warm and cosy being cared for by a nurse/carer at home. Our service runs 365 days a year, has no waiting list and helps families in every community across Ireland."

Dolores Duggan, Director, Hope House, said: "We are absolutely delighted and so grateful to the management and staff at Ireland West Airport for choosing Hope House as one of their Charity Partners for 2019. On behalf of everybody at Hope House, staff, residents, former residents and members of our continuing care programmes and their families we want to say a very special thank you to Ireland West Airport and to everyone who supported the fundraising events during the year.

"We were truly overwhelmed to receive such a huge donation and will use the donation well to help addicted people and their families. Every-day at Hope House we are dealing with emerging trends in alcohol, gambling and drug use. Not a day goes by that we don’t have an enquiry from a family member or addicted person looking for help. Once again a heartfelt thank you to all the staff at Ireland West Airport."