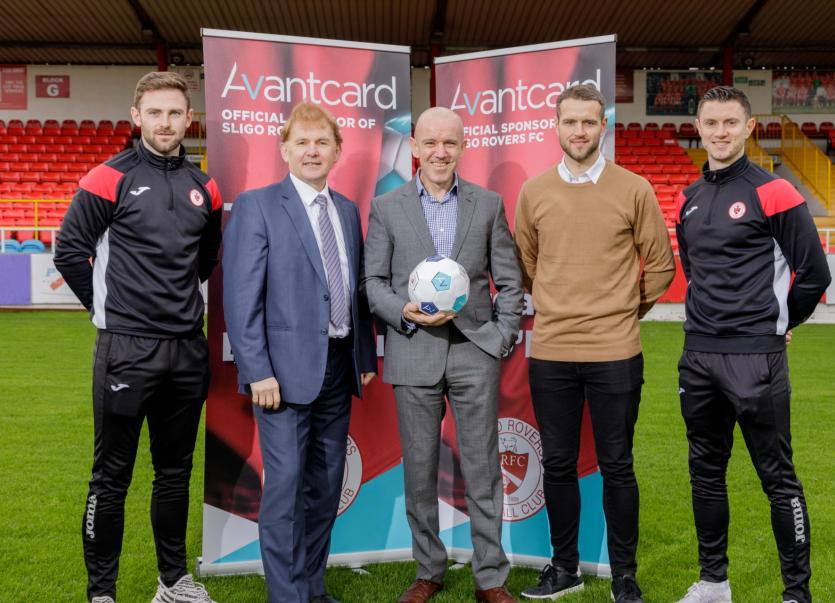 Sligo Rovers and Avantcard have announced a significant new partnership as the Leitrim-based lender becomes the primary sponsor of the Bit O’ Red.

The two-year agreement will see the Avantcard logo appear on the men’s senior home and away jerseys, along with branded signage throughout The Showgrounds.

It has been hailed as a significant boost for Sligo Rovers as they secure consumer finance provider Avantcard as their newest commercial backer and most important overall sponsor.

The announcement was made by Sligo Rovers CEO, Colin Feehily and Avantcard CEO, Chris Paul at a media event in The Showgrounds today. Sligo Rovers are building up to an exciting new season, with support for the club increasing year-on-year and season ticket sales at their highest level since 2013.

The #bitored and @AvantcardIre are delighted to announce a significant new partnership as the consumer finance business becomes the primary sponsor of Sligo Rovers.

The deal also strengthens links in the community for Sligo Rovers and, as club chairman Martin Heraghty explained, partnering with Avantcard is a sign of the club’s growing influence not just in Sligo, but in the North West. He said “We are simply thrilled to confirm Avantcard as our new primary sponsor.

“As a large employer in the region, they whole-heartedly share our belief in the community, which was an important consideration for us in looking for a new sponsor.

The club would not be able to function without the support of the business community, and today we have partnered with a major player in the Financial Services sector based right on our doorstep. I want to thank Chris Paul, and all the team at Avantcard, as we look forward to the start of a successful partnership.”

Chris Paul, Avantcard’s CEO said “Avantcard is absolutely delighted to be partnering with Sligo Rovers to become their official sponsor.

“It is a turbulent time for Irish soccer which makes it all the more important for businesses to support their local sports organisations, given the vital role they play in their communities.

We are excited to show our support to Sligo Rovers and its fans, many of whom will be Avantcard customers. We feel this is a natural fit given our base as a local employer and our commitment to supporting people and projects in the region, and we are proud to be in a position where we can support the club for the next two seasons.”

The new 2020 season Sligo Rovers jersey will be launched at the end of January.