Students get Footloose this month in Manorhamilton 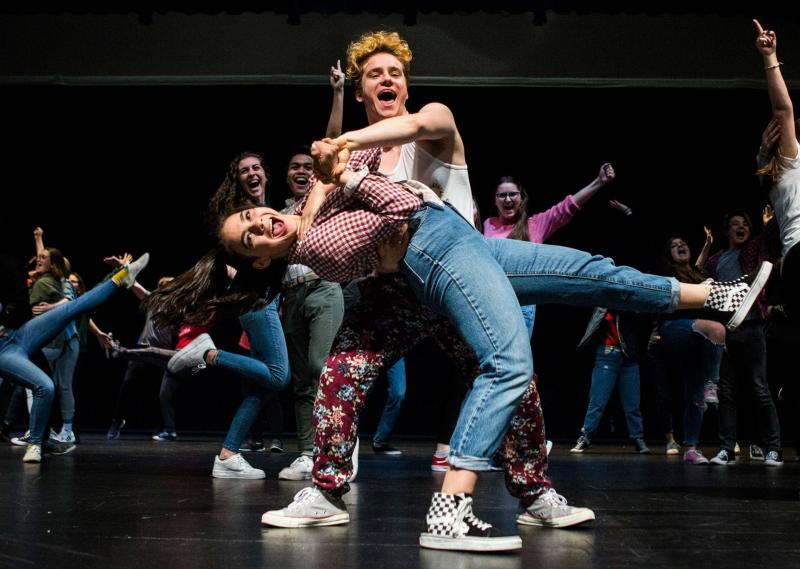 Manorhamilton is getting ready to rock and the students and staff of St Clare's Comprehensive School are taking full responsibility - there is a foot-tappin time ahead and they can't wait to get started.

The musical Footloose is ready to hit the stage at the Bee Park Community Centre and things are certainly hotting up!
Opening night is next Thursday, February 6 at 7.30pm.

Under the musical direction of Ms Sarah Keaney, this is one stage show that’s guaranteed to get the audience bopping along, featuring songs such as the familiar, and all-time favourites: Footloose, Holding Out for a Hero and Let’s Hear it for the Boy.
The storyline is a classic tale of teenage repression, and subsequent rebellion, told through feel-good music and song, accompanied by clever choreography and strong characterisation.
When teenager, Ren Mc Cormack, (Patrick Montgomery) moves with his mother, from the city of Chicago to the small town of Bomont, he receives something of a culture shock.
Bomont is a town where rock music and dancing have been banned; they are now illegal. Ren tries hard to fit in but struggles with the repressive nature of his new hometown.

Rev Shaw Moore (Tarach O’Snodaigh) is determined to keep the town, music and dance free.
Given that the senior prom is on the horizon, Ren and his classmates want to have the ban lifted.
With the help of Ariel Moore (Laoise Doherty) and Willard (Evan Gerry), his courage wins out and Bomont steps back into the light of music, song and dance as the collective spirit of the town becomes once more, footloose.
Other commanding performances come from Shauna Clinton (Vi Moore), Aoibhe McGrath (Rusty), Shona Sheridan (Ethel Mc Cormack), Darragh Maguire (Chuck Cranston), Hannah Johnston (Urleen), Hannah McManus (Wendy Jo), Eilish Victorino (Brooke) and Kate Venusa ( Julianne).

Production is by Ms Treasa Nealon, with choreography by Ms Breda McNulty. Wardrobe and costume design is by Ms Stephanie Brennan and set construction by Mr John Donohue. The artistic director of the production is Ms Hillary O’Gara.

Also read: Leitrim jobs roundup - who is hiring this week?