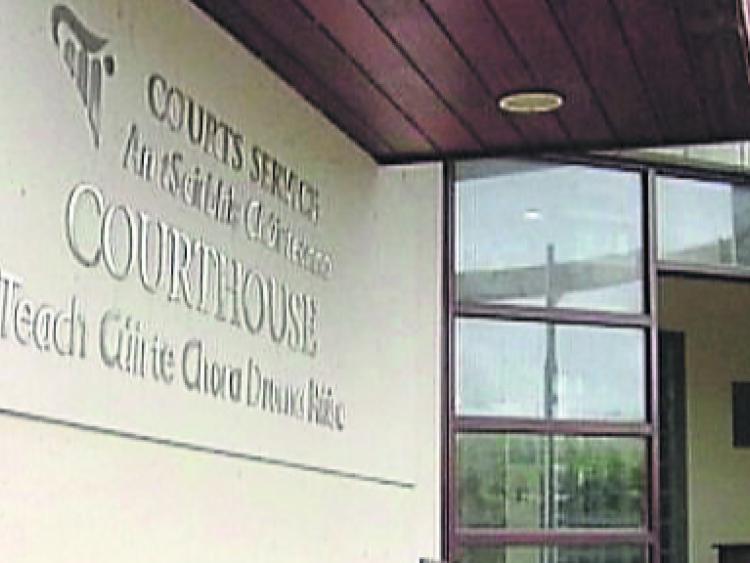 A Carrick-on-Shannon man who assaulted an 81-year-old was convicted and fined €500 by Judge Kevin P Kilrane.

The victim, Noel McPartland, who was 81 years of age at the time, had been entertaining guests in his home with his wife on the evening in question. When their visitors went to leave the property at around 11.30pm they found rubbish dumped outside the property.

Mr McPartland told the court there was a vehicle parked outside the door and he took a photo of it on his mobile phone.

“At that point somebody in the passenger seat of the car told a man getting into (the driver's side) that I had taken a picture,” said Mr McPartland in his evidence.

When the man asked why he had taken the picture Mr McPartland said that he replied “You'll find out in due course”.

At this point the man grabbed him by the throat and held Mr McPartland up against his own car.

“My wife was watching and it was very traumatic for her,” said Mr McPartland.

He managed to wriggle free but he was grabbed again by the neck.

When he saw a second man approaching Mr McPartland said that his heart sank as he believed he was in “real trouble now”, but the man, the father-in-law of the defendant, pulled his son-in-law off Mr McPartland leading him away.

“A lady I believe was the mother-in-law of the man who attacked me, then came up to see how I was. I really appreciated that. I had never met any of these people before,” said Mr McPartland.

The victim pointed out the man who assaulted him as Mr Reilly, the defendant. He also produced the photo of his attacker taken moments before the incident and said that he believed this was of Mr Reilly.

Mr McPartland said he later attended his doctor for slight injuries including a “sore neck and headaches” and he also reported the incident to gardai.

In cross examination by Mr Reilly's solicitor, Gerry McGovern, Mr Partland acknowledged he had been annoyed by the presence of the rubbish outside of his home on the night of the assault, but Mr McPartland pointed out “not to the degree where I was going to loose the head about it”.

He emphatically denied making any accusations about Mr Reilly being the person responsible for dumping the rubbish.

“I put it to you that yourself and your wife were upset outside your house and you believed that my client had done this (dumped the rubbish) when he didn't do it. There was no assault,” said Mr McGovern.

“That is not true,” Mr McPartland replied. “I was assaulted. I was grabbed by the throat and it all happened in front of my wife.”

Gda Conor Redihan took the stand and detailed meeting Mr McPartland at his home on May 22, 2018. He was shown photos of the alleged attacker and the vehicle, taken by the victim.

Making enquiries about the registration number visible on the vehicle in one of the images, Gda Redihan established that it belonged to Brian Reilly, 12 Shannonside View, Rosebank, Carrick-on-Shannon.

The garda also met with a detective in Carrick-on-Shannon garda station and showed him the image of the man Mr McPartland had identified as his attacker. The detective confirmed the man in the image was Brian Reilly, the defendant.

Gda Redihan said he and another garda had called to Mr Reilly's home to speak with him and his wife on June 19, 2018.

Mrs Reilly was invited to make a statement as she had been in the vehicle which had been photographed on the night in question but she said she hadn't witnessed anything.

She said her father had been present that night but Gda Redihan noted that, at that stage, Mr Reilly interrupted the conversation and insisted his father-in-law had been drunk that night.

Mrs Reilly continued speaking with the garda adding that her mother had been present that night but Gda Redihan said at this stage Mr Reilly again interrupted the conversation aggressively and told the garda “you should be speaking to me and not my wife”.

“He (Mr Reilly) was coming in and out of the room during the conversation and then he approached me. Put his hands out in front of me and said: “arrest me, it's the only way you'll speak to me”,” said Gda Redihan.

Gda Redihan said that he and his colleague left and had been unable to contact Mrs Reilly's parents as they had no contact numbers and “couldn't trace them”.

Gda Redihan said he later met with Mr Reilly again at his home noting this time he was “in a calmer state”. He cautioned him and spoke with him about the incident on May 19, 2018.

“When I was speaking to Brian Reilly he mentioned an old man had racially abused him (on that date),” added the garda.

Taking the stand in court Mr Reilly claimed that Mr McPartland had been very aggressive towards him about the rubbish dumped in his doorway.

“I told him I had nothing to do with the rubbish and he said “ye people are going to know about this”,” said Mr Reilly.

He said he took the term “ye people” as being racially abusive.

“I told (Mr McPartland) why don't you go back in (your house),” said Mr Reilly. He denied striking the 81-year-old adding “I haven't touched anyone. I was never in trouble with anyone”.

He said he had never met Mr Partland since the assault and insisted that Mr McPartland had issues with a nearby pub and with people drinking in the pub.

Judge Kevin P Kilrane observed that, in the interview with gardai Mr Reilly had claimed he had been drunk on the night in question and couldn't remember anything.

“The garda read back the notes of this interview and you signed it,” said Judge Kilrane.

However Mr Reilly denied he had been interviewed before adding that “I was drunk but I know what I was doing.”

“Why tell a garda you can't remember (the incident) and why did your memory come back?” asked Judge Kilrane.

Mr Reilly did not respond.

Defending solicitor, Gerry McGovern acknowledged there had been words between his client and Mr McPartland on the night in question.

He said it was clear Mr McPartland has an issue with people dumping in the area and was angry.

“I'd say Mr McPartland was upset and he formed the conclusion my client was responsible,” said Mr McGovern.

“At all times my client has denied he dumped the rubbish. There were words exchanged and my client felt he was being victimised,” said Mr McGovern.

“My client has from day one denied he ever assaulted Mr McPartland. I would have liked Mr McPartland and Mr Reilly to meet and certain friendships be extended.”

It was noted that Mr Reilly had previous convictions, but not for assault.

Judge Kilrane noted there was no apology forthcoming from the defendant and “as such the question of imprisonment must be considered”.

He gave Mr Reilly a chance to apologise in court to Mr McPartland, the defendant made a statement apologising for any upset but Judge Kilrane said he felt that the effort was “an apology which is a half apology” with “no attempt to apologise for what amounts to a serious assault”.

He said he was satisfied that Mr McPartland's account was a true account of what happened on the date in question and that Mr Reilly had assaulted Mr McPartland.

He noted that Mr McPartland was 81 at the time of the assault adding that Mr Reilly was a young man and two foot taller than his victim.

“It is an appalling act of assault,” he said.

He said Mr Reilly had adopted a “very aggressive” approach in court adding that he was quite sure that “with alcohol (the defendant) is quite capable of violence” adding that it is only the fact that Mr Reilly has a family that he is not being sent to prison for the assault.

He then convicted and fined Mr Reilly €500 and fixed recognisances in the event of an appeal.