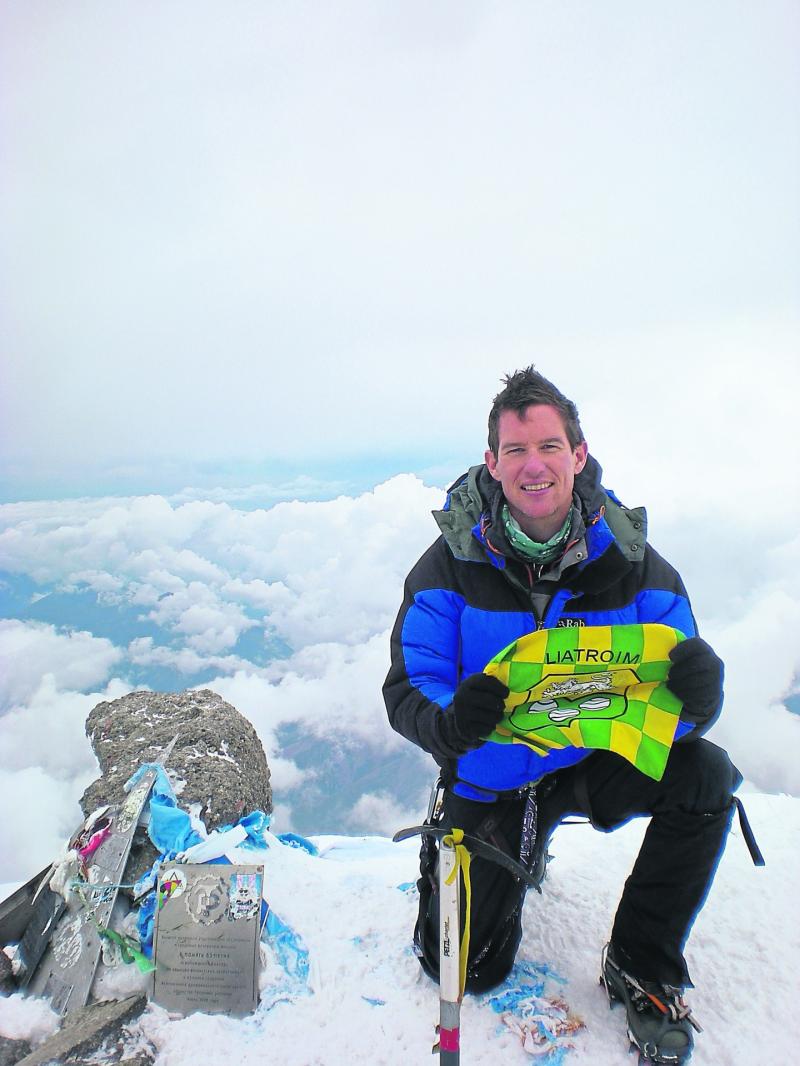 Domhnall Heron pictured last year after he reached the summit of Mount Elbrus.

10 days ago we featured an open letter to the Minister for Health from Sligo GP Registrar, Dr Domhnall Heron in which he called  for stricter measure to be put in place in order to try and reduce the spread of Covid-19.

That article attracted hundreds of thousands of views here and around the world and last Thursday, stricter measures were put into place.

In a second article sent to www.leitrimobserver.ie, Sligo GP Registrar, Dr Domhnall Heron points out that the coming days and weeks are crucial in the fight against Covid-19 noting: "If people steer clear of each other, there will be less transmission from person to person. By slowing the transmission, we can ‘Flatten the Curve’ and so reduce the peak numbers of cases and hospital presentations. This buys our hospitals time and manpower as it deals with the same number of patients over a longer time period."

Here is his latest article in full:

19th Century German philosopher Arthur Schopenhauer claimed that “All truth passes through three stages: First, it is ridiculed. Second, it is violently opposed. Third, it is accepted as self-evident.”

We are now facing the self-evident stage: a global pandemic on a scale not seen since The Spanish Flu in 1918. Having originated in China and ripped through Southeast Asia and Iran, the WHO describes Europe as the current epicentre. Ten days ago, Italy was diagnosing 700 new cases per day. That figure rose to 3,500 per day. The figures for Spain was approximately 100 new cases per day, this is now 1,900 per day.

The first case was diagnosed in Ireland 18 days ago. Following an early period of hesitation, the attitude of our health authorities began to change with their decision to cancel St. Patrick's Day celebrations, then introduce social distancing (closing schools, universities, cultural institutions and pubs) and broaden the criteria for testing. Our authorities deserve to be commended for their brave decisions so far. They have responded faster and with more conviction than other countries including the U.K. However, this is only the start, and much more can be done to contain the spread of the virus.
What is social distancing and why does it work?

The American Center of Disease Control (CDC), defines social distancing as "remaining out of congregate settings, avoiding mass gatherings, and maintaining distance (approximately 2 metres) from others when possible." To understand why this it is necessary, we need to know a little more about the virus.

The ‘R0’ is a term used to express how contagious an infection is. For example, the ‘R0’ of the Influenza virus is 1.3. That means that if someone gets the 'flu, they will pass it on, on average, to 1.3 other people. The average ‘R0’ of this coronavirus is 3.28 (Journal of Travel Medicine) which means that each person who contracts it passes it on to approximately 3.28 other people. Simply put, it is very contagious and possibly very tough. To control the spread of COVID-19 we must get the ‘R0’ to drop below 1. To do this we must separate people and limit our interactions. Home quarantine was insufficient in China, centralised quarantine was required to drop the ‘R0’. SARS CoV-2 is transmitted in the droplets from a person's nose and mouth, by breathing alone, not to mention coughing or sneezing. It then enters its new host through the eyes, nose or mouth. Touching one’s face increases the risk of contracting the virus especially if one’s hands have touched a surface that the virus has landed on. People carry this virus in saliva and mucus from the nose. It is an incredibly important fact that we can pass it on to other people without having any symptoms whatsoever – by merely breathing.

If people steer clear of each other, there will be less transmission from person to person. By slowing the transmission, we can ‘Flatten the Curve’ and so reduce the peak numbers of cases and hospital presentations. This buys our hospitals time and manpower as it deals with the same number of patients over a longer time period. 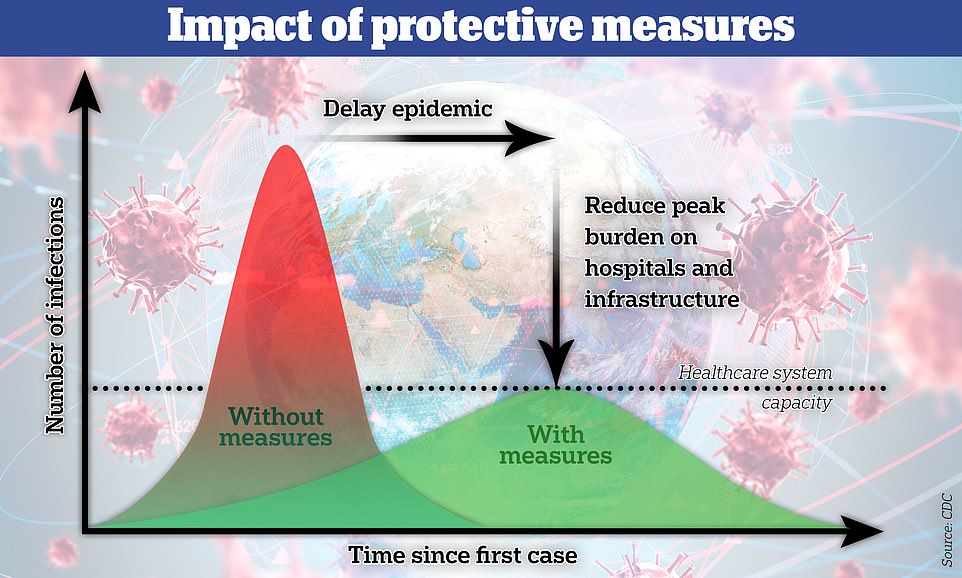 Renowned Chinese respiratory specialist Zhong Nanshan said last week that if most countries were to act like China, the global COVID-19 pandemic could be brought under control “by June”. At a press conference in Guangzhou last week, Zhong added: “if the world fails to attach great importance to addressing the threat and infectiousness of the virus through interventions, this timeframe may be extended”.

We have closed schools, universities, cultural sites, pubs and recommended people stay 2m from each other where possible. To follow China’s stringent but effective measures we will need to extend the closures to all businesses and places of work except healthcare facilities and grocery shops and convince (or force) people to remain in their homes. Europe must close all international borders to limit all non-essential travel (more difficult on our island). The ‘herd immunity’ strategy adopted by the U.K. and Netherlands is uncontrollable. It will result in mass suffering and loss of life.

The head of the World Health Organisation Dr. Tedros Adhanom Ghebreyesus said on Monday: “We have not seen an urgent enough escalation in testing, and contact tracing, which is the backbone of the response.” Our health authorities have recently worked tirelessly in this regard. From testing a total of approximately 2,000 cases in the first two weeks, they now recognise the need for between 1,000 to 2,000 tests per day to arrive at South Korean standards. Unfortunately, it will take more time to reach this goal.

Countries that have successfully brought COVID-19 under control e.g. China, South Korea, Taiwan have used technology to track people in ways that Europeans have never countenanced. In South Korea whenever a new case is identified an emergency text message is sent to everyone letting them know where. Next a timeline is given of the person's whereabouts over the previous 48-72 hours so that if someone has been to those areas, they can present for testing. Those places are immediately shut down and sterilised.

In all those countries citizens who were diagnosed with COVID-19 were tracked by apps to make sure they obeyed the strict self-isolation criteria. They had data systems that allowed the government to retrospectively warn people in an area where a community outbreak had occurred.Our authority now merely tells us in which region the cases have occurred. The biggest difference between China and Europe is data access rules. Governments and companies in the EU have been implementing controls as part of GDPR which makes access to existing data difficult. As a country we need a national conversation, and quickly. Are we willing to erode some of our privacy to fight this monumental threat?

Although approximately 80% of those who contract the coronavirus will have mild symptoms and thankfully no deaths have been reported in those under 9 years of age, we undoubtedly have difficult times ahead. We have never seen a virus like this before: one that is both contagious and resulting in such a high proportion of ICU admissions and mechanical ventilation for those infected.

Ten days ago, I estimated that if 0.2% of Ireland’s population (10,000 people) contracted this virus, our hospitals would be unable to cope. The following day Susan Mitchell writing in The Sunday Business Post estimated that 1.9 million people in Ireland could be affected. Many of us will have relatives or friends admitted to hospital. Some will not make it. With a rapid increase in the case number to continue here, there is a lag time of 7-10 days between a person showing the symptoms and needing hospitalisation. Over the next few weeks our hospitals will come under immense strain.

There may not be enough ICU beds for those sick enough to need them. Doctors may have to make agonising decisions as to which patients merit ICU beds and ventilators over others. Patients and families may experience the trauma of even more overcrowded hospitals than before. Healthcare workers may have to deal with the anguish of being unable to treat those who need it only from lack of resources. Still, we hope that the measures enforced by our government will ameliorate the suffering but the experience in China and Italy have taught us that this is a virus with a tenacity which we have never seen before.
Support from each other is key. Some positives followed from the terrible trauma of the 2008 economic crash. People began to imagine themselves and the world in new ways. Participation in sport surged. Thousands were soon seen cycling our roads and running in our parks. Wonderful smart new coffee shops sprung up selling locally roasted coffee and artisan treats. Knitting became popular as people rekindled interest in other art and craft too like painting and sculpture. Interest in mental health and a quest to build personal resilience became hot topics. Meditation, mindfulness, yoga entered the public consciousness like never before.

Over the coming months we are going to need these skills and more. Though we need ‘to separate ourselves to save ourselves’, could this adversity spark a new movement of solidarity and social cohesion? Already we see primary school teachers kindly volunteering to mind the children of healthcare workers, shoe repair shops offering free shoe repair to hospital staff, medical students offering their time to deliver medicines to the elderly, free online dance and exercise lessons to keep children active, organisations volunteering to deliver food parcels to our elderly. These are kind acts of solidarity that deserve to be commended and celebrated.

Economically, we are entering a dark phase. Many businesses may have to shut for up to three months or perhaps even longer. Those in the hospitality, catering, tourism and transport sectors will be worst affected. Many may not be in a position to reopen once the virus is under control. As a society we face the prospect of higher unemployment while losing some of our favourite cafes and restaurants. Could we all make a financial contribution? I would like to donate one weeks salary to the healthcare effort against COVID-19 and to support those most affected. If others were interested, perhaps employers could donate the sum directly and spread the remainder of our salary evenly over the next year to avoid us paying a substantial lump sum all at once? If co-opted by the government as a ‘Solidarity Scheme’, I would like to see the funds ring-fenced with accountability and clear evidence of where it was spent.

We face great challenges in the next months ahead. SARS CoV-2 is unlike any virus we have encountered in living memory. Our secondary care system will come under extreme strain, perhaps even to breaking point. Crucial decisions about the importance of personal privacy need to be made immediately.  Limiting that privacy, for a short time, could save many lives. Already we have seen compassion and solidarity, the best of human nature. Adversity is upon us, but with it always comes opportunity.