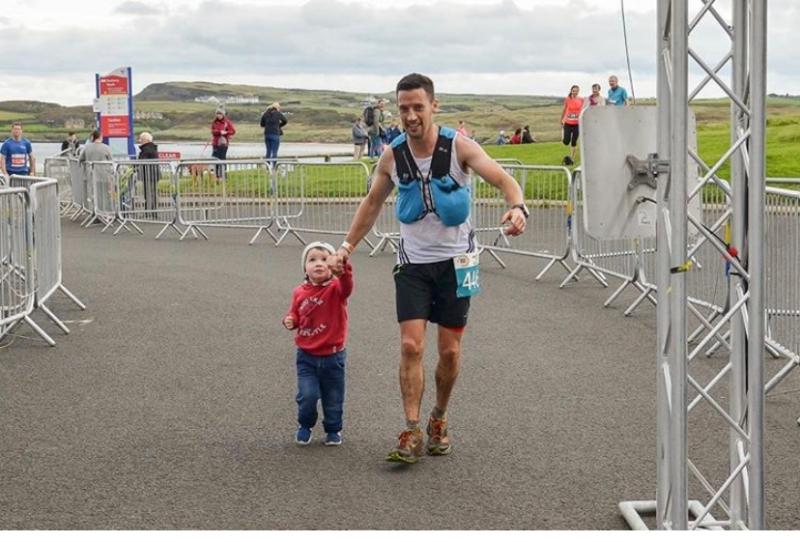 Alan Wynne and his son Adam

One Co Leitrim man is, quite literally, undertaking a marathon effort in a bid to raise funds for Cavan Hospital frontline staff and Drumsna Meals on Wheels.
Drumshanbo native, Alan Wynne and his brothers are well known for competing in ultramarathons, but this time, Alan will be going solo in own - admittedly unusual - marathon.
Speaking with the Leitrim Observer this week, Alan explained that he lived in a rural area of Co Leitrim, Kilnagross to be exact, and had been exercising along empty roads near his home.
“Where I live you can run and not come across anyone at all,” he points out.
He has marked out a looped route around his home which observes all the lockdown rules and social distancing guidelines.
Each loop is 6.22km and Alan will be running 19 loops - reflecting the name of the virus, Covid-19. This means he will be running a grand total of 119km in less than 24 hours!
In reality he'll be running far more than a marathon whose distance is 42.195km- in fact, Alan will have run the same distance as nearly three marathons by the time his fundraiser is complete.
Alan says the inspiration for the event came to him because his wife works as a nurse in Dublin and his family has witnessed, first hand, the pressures that frontline services are facing during the Covid-19 pandemic.
Describing his wife and her frontline colleagues as 'heroes' Alan said that the toll on staff has been immense.
“My wife wears a mask in the house when she comes home and is social distancing from myself and our kids. It is hard for her and for us and this is repeated for all families who have someone working on the front line,” he said.
“Three days after the first lockdown came into effect the idea of doing a run came to me and I just couldn't get it out of my head,” he admits.
However when he put the idea to his wife she told him he was a “mad eejit” and he put the idea aside for a day or two.
“But when I put my mind to it I can't let things go. I worked out the route and then thought, what if I did 19 of these loops and raised money by doing it?”
When his wife finally gave him the green light, he initially thought of raising funds for Dublin health services but decided, to keep the fundraising local.
After being put in touch with the management of Cavan General Hospital, he decided to fundraise specifically to help provide meals for frontline staff who are working 12-13 hours with little break. And, in keeping with the local angle, he added in a second fundraising recipient, Drumsna Meals on Wheels.
“My brother and I helped raise money for Drumsna Meals on Wheels last year and before the lockdown came in I spent time with the service helping with deliveries. They are an amazing service and full credit should go to Lorraine Mulvey and all those who help with it,” he said.
Alan is planning on starting his 119km odyssey at 5am on Friday, May 1 and his wife and children will be helping track his progress with updates and video.
As an experienced long distance runner, Alan says he isn't doing anything unusual in his preparation for the 19 loops but points out that, when your are running such long distances, “it's really mind over matter. It's my frame of mind that will get me through, get me to finish that 119km”.
Despite only starting fundraising for the event Alan has already raised over €3,600 for these two very worthy causes.
You can make a donation to Alan's 19 loops fundraiser on his gofundme page: https://bit.ly/3cChWuo
Alternatively you can also just search Covid 19 Loops on gofundme and you will be directed to Alan's page.