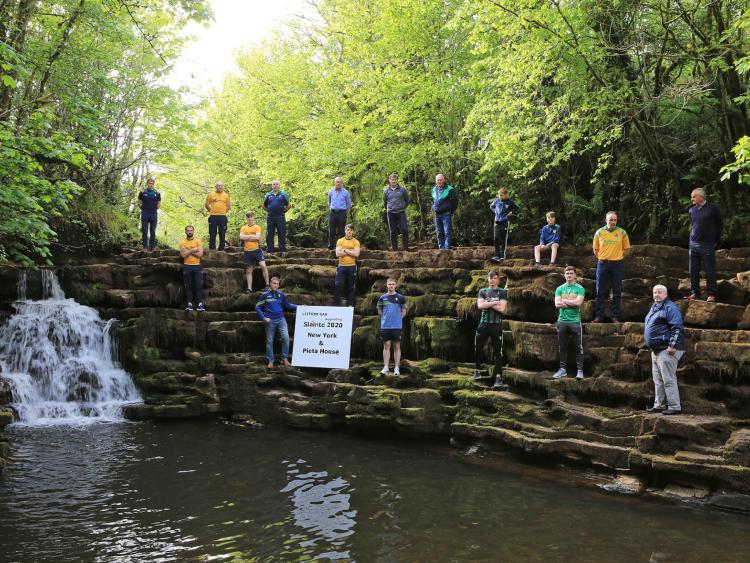 The fundraising campaign on May 16 last, organised by the Leitrim Senior Players and supported by past players, has been a resounding success. To date in excess of €20,000 has been raised for Sláinte 2020 and Pieta House.
A staunch social media campaign in the build up to last Saturday certainly caught the imagination of the public as many Leitrim supporters and family members took to the roads to complete a 5k/10k variety of walking, running or cycling.
There were participants from all over the county of Leitrim and nationwide from Dundalk to Dublin, in addition to participants across the globe, including Scotland, New York, Toronto and Australia!
Despite the current absence of on-field GAA activity, it was certainly a day for the Green and Gold to be worn proudly in the name of charity.
While Pieta House is very well known for the tremendous work that it does in this country with regard to the mental health of people, less perhaps had been known of the campaign organised by the New York based Sláinte 2020 group which was formed in April this year in response to the dire situation that has unfolded in New York as a result of the Covid-19 pandemic.
It's planned to harness the collective reach of well-known and long-standing Irish organisations to maximize fundraising to assist individuals and families adversely impacted by the crisis.
The partnership consists of Aisling Irish Community Centre, Emerald Isle Immigration Centre, New York GAA, New York Irish Centre and United Irish Counties Association. Irish people in New York, who have demonstrated genuine financial hardship caused by the Covid-19 pandemic and who have limited or no access to other sources of fiscal aid, are first in line to benefit from this organisation which lists among its committee members Caitríona and Seamus Clarke of JP Clarke’s Bar and Restaurant, the current Leitrim GAA main team sponsors.
Sláinte 2020 has raised over $150,000 in three weeks, with an additional $15,000 pledged. Of this, $148,000 has been allocated in grants to date.
The volume of applications pouring in indicates an even greater need for support in the Irish community than that originally anticipated. They have received over 450 applications in three weeks and estimate that $400,000 would be required just to meet current requests for support.
Given that Sláinte 2020 is now receiving on average 30 applications per day, they project that goal figure to increase considerably in the coming weeks. Although construction work may resume shortly in New York, approximately two-thirds of applicants work in the hospitality sector. Any financial reprieve for that sector in the foreseeable future is likely to come slowly and prove sorely inadequate to counter great hardships threatening them and their families.
In the lead up to last Saturday incoming GAA President, New York based Larry McCarthy, lent his support to the Leitrim GAA campaign by participating in a Zoom interview on Thursday last which was set up and broadcast on its social media channels by Leitrim GAA.
Saturday’s event will go a long way to help alleviate some of the hardship Stateside and it is greatly appreciated by all concerned.
For many generations aid has arrived to these shores from US based emigrants and it is entirely appropriate that, in their hour of desperate need, Irish and Leitrim people are seen to dig deep into our pockets to return the favour.
Leitrim GAA is greatly appreciative of the efforts that people made last weekend, both in their participation and their contributions, to ensure that this campaign was a resounding success; it should reflect very well on the organisation into the future.
While the major focus of this fundraising campaign centred on Saturday last, the organising committee will gladly accept any donations that may people may decide to offer and in particular with regard to those who may not have access to an online platform
To donate go to https://www.gofundme.com/f/
leitrim-gaa-supporting-others
You can also donate by lodging money to the following Bank Account details: IE30 AIBK 9370 3700 7540 36 and this will be gratefully accepted.