HISTORY: Leitrim in 1870: a society in transition 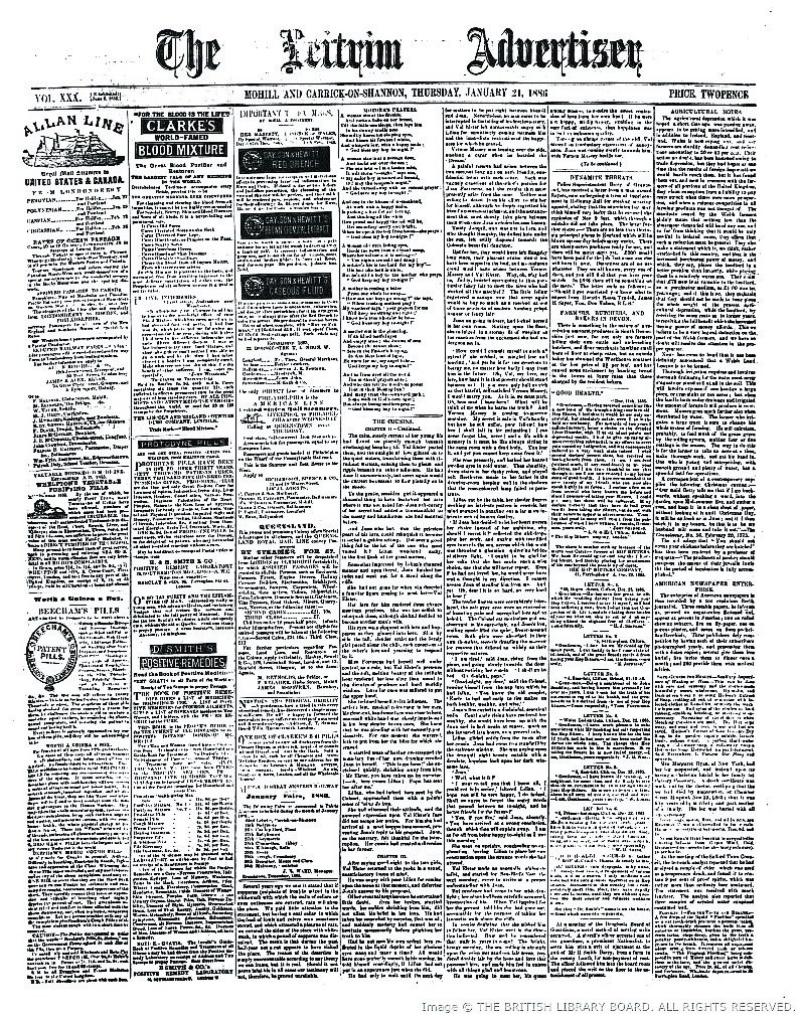 Fiona Slevin, Mohill native, historian and author of Hereditary Virtues: A History of Lough Rynn continues with her series of articles on life after the famine in Leitrim

Local newspapers 150 years ago
The Leitrim Journal & Carrick-on-Shannon Advertiser was published weekly from October 1850 to December 1872. In Mohill, Robert Turner, Printers, of Main Street, published The Leitrim Advertiser every Thursday, between October 1867 and September 1870. (Both had short breaks.) There was also a Leitrim Gazette published in Mohill from January 1858 to September 1867.
Being contemporary, newspaper reports provide broad global context for local events, and microscopic detail that enlarges our general historical perspective. The reader of a local newspaper in 1870 in Leitrim was well-informed on local, national and international issues and had access to a plethora of goods and services via the newspapers’ advertisers.

International news from Abyssinia to Brazil
The Leitrim Journal & Carrick-on-Shannon Advertiser filled its pages with many stories from international and national newspapers, as exemplified by a few stories from 1868 to 1870.
It reported from St Petersburg that Russia wanted to reassure Europe that it was ‘free from any desire of aggrandizement’, and ‘wishes no extension to her frontiers,’ only seeking peace and internal prosperity.
It announced that the mail line between San Francisco and China was now to be a monthly service to meet the rapid increase in demand for European travel and freight, and to create more access to Chinese goods, including raw silk, spices, fine porcelain and teas.
In January, Vesuvius erupted, with lava visibly flowing from the top, presenting ‘a most remarkable appearance’.
There was news of Theodore of Abyssinia’s progress towards Magdala and the insurrection in Candia, Crete, including the Greek king’s statement that ‘humanity and indisputable laws of fraternity impose on us a sense of duty to give what succour we can under so great a calamity’.
In Madrid, politicians were worried about a probable speedy uprising in Catalonia; a front-page story reported the distress in East Prussia and questioned whether it would be ‘peace or war’ between Prussia and France; five hundred lives were lost when a steamship and a British steamship and a Turkish steamer collided in the Suez Canal; the Government of Brazil was ‘determined to promote emigration’ and had appropriated 200,000 acres for the emigrants at one shilling per acre, payable in five years – as well as paying £5/10s towards the passage money. And it was with great relief that the paper reported that Dr Livingstone had been found safe and was continuing his explorations through Africa.

The weather and food prices
More locally, the weather and food prices were topics. In Mullingar, potatoes ‘which received 6 pence per stone in the early part of January’, could be had for 5 to 5½ pence per stone, and were of ‘excellent quality’.
In July 1868, the paper reported that ‘seldom has the weather proved such a national topic of conversation’. The country was experiencing such a drought that had not been known in Ireland for sixty or seventy years, and farmers were filled with apprehension about the impact of ‘such a long absence of rain’. The contrast with the previous year was noted, when shortly after St Swithin’s day (July 15), there was unprecedented rainfall.

Tempting advertising
As well as the journalistic reports, the papers carried a range of advertisements. The Mohill-based Leitrim Advertiser seems to have carried more local advertisements, while the readers of the Leitrim Journal & Carrick-on-Shannon Advertiser were tempted over their breakfast to a wide range of goods and services from across Ireland and Britain.
The paper carried advertisements for multiple teas, Dunville Irish whiskey, dentistry (including the French method of fixing artificial teeth), coal, manure, butter powder (to cut the time it took to churn butter), winter coats, clocks and watches. Benson’s of London carried a regular ad for chronometers and keyless watches in gold and silver. They ranged in price from £2 to £52, with most above £25, in the realm of a schoolteacher’s annual salary.

Health and manly vigour
Most intriguing were the multiple ads for various medical cures, ointments, many for various nervous disabilities and especially ‘health and manly vigour’. Holloway’s Ointment – in nine different sizes costing from 1 to 38 shillings – could cure asthma, bronchitis, bad legs, and the sores and swellings caused by the ‘imprudences of youth’.
The ‘marvellous and invaluable’ ‘Improved Electric Galvanic Curative Appliance’ promised the ‘most effectual cure ever known’ for loss of energy and manhood arising from ‘Youthful Abuses or Adult Excesses, producing inability to fulfil the obligations of marriage’.
Dr Curtiss’ Medical Guide to Marriage (‘the result of 30 years successful practice’), offered special instructions for the married and unmarried that would help them avoid the issues that ‘destroy the happiness of wedded life’.