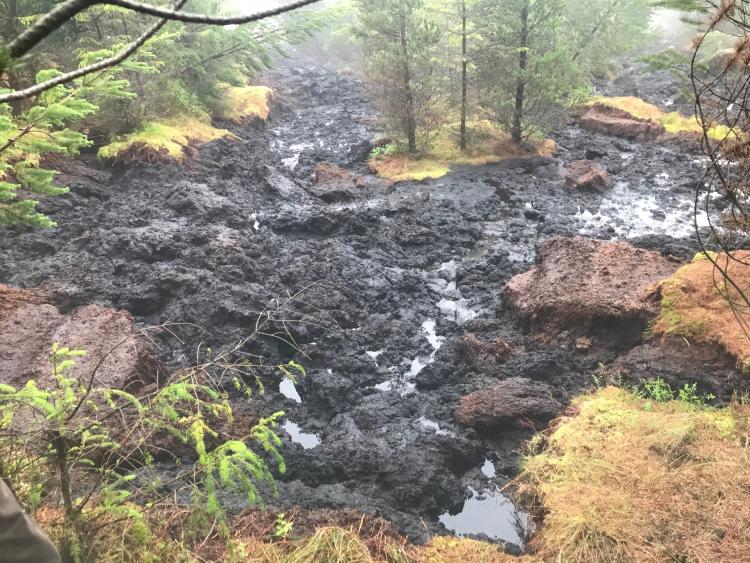 The cleanup bill for the recent landslide on Shass Mountain could exceed €5m according to rough estimates provided this week.
Three separate motions were brought before this week’s Manorhamilton Municipal meeting about the landslide which occurred near Drumkeeran on June 28.
Cllr Padraig Fallon; Cllr Justin Warnock and Cllr Mary Bohan all sought clarity on what works were being planned to deal with the aftermath of landslide.
Responding to Cllr Fallon’s call for an update on the situation, a spokesperson for Leitrim County Council said that they have hired a specialist engineering consultancy firm to prepare a design and appoint a contractor to buttress the Dawn of Hope Bridge. The Council acknowledged that the work to secure the bridge was “complex” but said that they hoped to progress work as quickly as possible.
Work is also ongoing on clearing roads so that traffic can enter the area and it is hoped to have the Greyfield Road open today (Wednesday, July 22).
It was noted that a working group of stakeholders has been established, under the leadership of Minister of State at the Department of Heritage and Electoral Reform, Malcolm Noonan. The group met this week and a second meeting is already planned.
Cllr Mary Bohan, who attended the working group meeting as Cathaoirleach of Leitrim County Council, said that the Office of Public Works along with farming organisations, IFA and INHFA, will be invited to join the working group going forward.

Hardship fund
Cllr Mary Bohan asked that the Council contact the new Minister for Agriculture to ask that a special hardship fund be put in place for landowners affected by the landslide. She also asked that central government funding be made available to Leitrim County Council and the Office of Public Works to allow for additional drainage and remedial works to be carried out in the area.
“The rough figure thrown out at the (working group) meeting for the cost of repairing the damage is €5m. This is a very rough estimate but it is clear that Leitrim County Council cannot bear the cost of the works it will take to repair the damage from this landslide. We need an allocation from central government for this work and farmers need assurances they will not lose out on payments and will also be supported during the time it takes to carry out remedial works,” she said.
Cllr Justin Warnock agreed that support for those farmers whose meadows, grazing and fencing have all been impacted by the landslide.
He also asked if the cause of the landslide has been ascertained and said it was vital all wind farm and forestry development in the area be halted until the exact cause of the slide can be established.
All councillors unanimously backed the three motions.