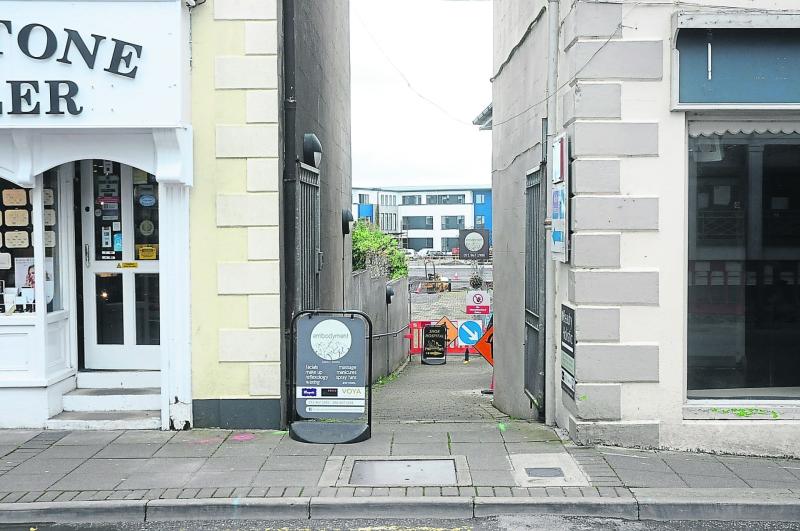 The alleyway providing access between the Main Street and the Flynn's Field carpark currently under construction Picture: Willie Donnellan

There has been a great deal of confusion both amongst local councillors and the wider local community over what the Council has described as a 'concept' to develop the area between Main Street Carrick-on-Shannon and the new Flynn's Field carpark.
At the July meeting of Carrick-on-Shannon Municipal District, Cllr Des Guckian raised a query regarding the Part 8 Public Realm works currently underway in Carrick-on-Shannon.
He said he understood there were more works planned than the current works underway, including the development of what he described as a 'large plaza' across from the Catholic Church and said that he felt all plans for the development of the area should have been brought before councillors for discussion before proceeding.
Responding Senior Engineer, Shay O'Connor, acknowledged that the Council were looking at the "concept" of the development of a community building between Main Street and the Flynn's Field carpark involving the movement of the Leitrim Design House from its current location to a new setting to "help develop that area of the town".
"It is just a concept," stressed Mr O'Connor at the meeting.
To which Cllr Des Guckian responded "it's a concept with very serious issues down the line and there may be six premises demolished".
Cllr Guckian said he understood a plaza was being developed to which Mr O'Connor said that “no plaza” is being developed. Mr O'Connor said that the new concept involved three businesses and insisted the "Main Street will still remain as a street. There is a protected structure involved and we may not even touch the remaining buildings. This concept is in its very, very early stages," he said.
Cllr Guckian asked why these plans have not been brought before the council members for discussion and said that members were made to "look stupid".
However Mr O'Connor again stressed this was merely a concept the Council was looking at and clarified that this is not part of the current Part 8 Public Realm works being carried out on the Main Street and St George's Terrace area of the town at the moment.
"This (concept) is just something we are thinking of doing. It is not part of the current Part 8 works and as part of that we're not knocking any buildings."
Speaking to the Leitrim Observer this week, Cllr Guckian again said "we, councilors were not informed or consulted by Council officials" about new proposals for the town centre.
"I did ask questions at the last Municipal (meeting) on July 13. I was met with evasion," he said.
"I believe the officials are trying to rush this through. There is no due process, leading to a proper Compulsory Purchase Order (CPO). I'm asking the officials, led by Chief Executive, Lar Power, to drop this most unpopular pipe dream of theirs and to deal fairly and honestly with those most affected."
Also speaking to the Observer this week, Cllr Enda Stenson said that it was clear from the July Carrick MD meeting that something was being considered for the Carrick-on-Shannon town centre but said this was "deemed (by Council management) as being not up for discussion at that stage with councillors".
"We had no idea of what was being planned and it was not until Thursday last week (July 23) that I got a call from Mrs Geraghty in an awful state about what she said was the Council's plans to demolish her family business," said Cllr Stenson.
He met with the family and now understood "Part of this project may or may not include the demolition of three buildings, it now appears," said Cllr Stenson. "The fact is that we, as local representatives, heard nothing about these plans".
Cllr Stenson said following his meeting with the Geraghty family he contacted Mr Power adding "he (Mr Power) did apologise and I pointed out that as another group in the town (the Town Team) had discussed this it should have been brought before our members. We are still in the dark as to what the plans discussed with the Town Team actually were."
Cllr Stenson said that he was not saying he was upset that a proposal was put forward on the town centre but he is "extremely upset at the way that this proposal has come to the public notice. When something like this is potentially affecting not just people's businesses but also their homes, and for that to come to light on social media, that, is just completely unacceptable that it should come out like that."
He said Cllr Guckian had raised this issue at the Carrick-on-Shannon MD meeting and that had been an opportunity there for the Council to "address the members on this and explain what was being planned so it could be discussed, but this didn't happen".
"I believe that Leitrim County Council management have handled this badly. To do what was done to elected members is not good enough. To leave us in the dark about a proposal such as this when it has already been discussed by the Carrick Town Team, and I am not fully sure who the Town Team is made up of, then not be brought to the attention of elected representatives, is not good enough."
He said that "unless I am satisfied that the owners of all three properties involved are satisfied with the plans I will never support this development at any stage of the process."

For more on this story read HERE