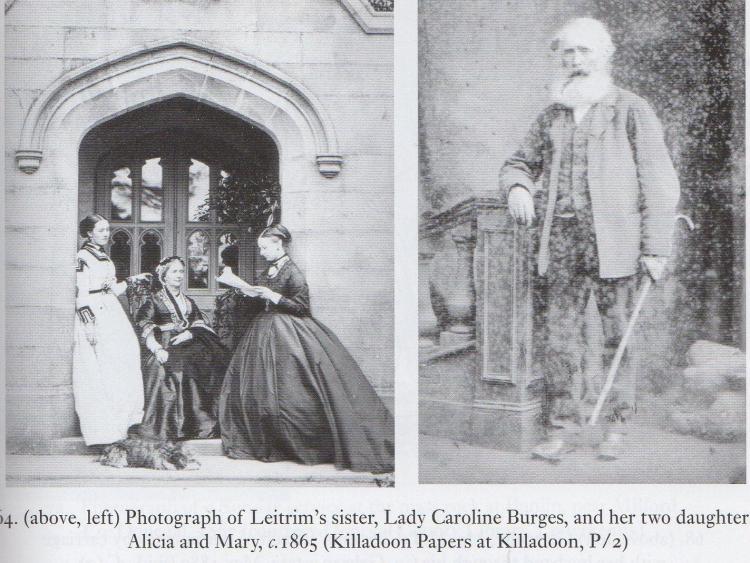 Following our brief series about Leitrim and Mohill history, this article veers a little off track with a look at the character of William Sydney Clements, 3rd Earl of Leitrim, Lord Leitrim.
Part 1 looks at the Earl’s formative years and family relationships; Part 2, next week, looks at his romantic relationships.

The second son
William Sydney Clements was born in 1806 and grew up in a family that was unusually intimate and close. His parents spent time with their eight children and encouraged a rounded education and an interest in politics. Sydney was the fifth child, and had three older sisters and an older brother.
As a second son, Sydney never expected to inherit the title or the lands. He got on well with most of his siblings, including his older brother Robert.
Unlike Robert however, Sydney was neither a dutiful son nor a model student. He had real difficulty with book-learning and spelling, and his school reported him as ‘extremely idle and troublesome’.
As Sydney emerged from childhood, he struggled to please his father, and became deeply conscious about his position as a less favoured, less intelligent, less handsome, second son.
He relied on his mother as a comfort and confidante. She in turn urged the earl to give more attention to their son ‘who, though dull at his books, is warm-hearted and affectionate’.

A military career
Although he failed to pass his school exams, an army commission was purchased and Sydney embarked on a career with the 43rd Light Infantry. His mother was delighted to hear that her 18 year old son was considered one of the regiment’s best recruits, and Sydney went on to distinguish himself on tours of duty in Gibraltar and Portugal.
While his relationship with his father continued to be strained at best, he stayed close to his mother, though became ‘dreadfully bored’ by her ‘expressions of fervent piety and anxiety about his physical and spiritual health’.
Unfortunately for him, Sydney’s military career was cut short at the age of 24. He badly injured his knee when a horse fell on him, and never fully recovered. He suffered lameness and constant pain for the rest of his life.

Respite from family life
While Sydney had revelled in military life, he also relied on it as a respite from family life. His forced retirement from active service capped a fraught period in the late 1820s and early 1830s that included the death of his first love, inter-sibling conflict, his mother’s failing mental health, and the deaths of his brother George in 1837, and his older brother Robert in 1839.

Domestic matters
From the 1820s, Sydney’s mother’s mental health became increasingly fragile and family life became more difficult. Lady Leitrim illness was so severe that, in May 1830, she was ‘placed under medical coercion’ in Killadoon, Co Kildare.
It seemed that a particularly destructive relationship with her daughters Elizabeth and Caroline, played a large part in the decision to remove her from London. The two young women, then in their late twenties and unmarried, continued to live with their father in London.
The physical separation of Lord and Lady Leitrim was a sharp and deeply felt contrast to their earlier relationship. On 14 December 1831, the earl wrote to Lady Leitrim, wearily sharing his increasing despondency and ‘dislike of the world and of society’.
Parliament, he said, was the only place he went to; his single interaction, it appeared, was with his son Sydney, on whom he depended for company and who dined with him every day.
Lady Leitrim stayed at Killadoon for two years but she never fully recovered and experienced recurring bouts of illness for the next decade.
Sydney alone seemed to be able to deal with his mother’s mental health, demonstrating a level of attention and patience that was singularly absent amongst his siblings: Elizabeth and Caroline had been instrumental in her isolation; Maria and Charles were dismissed as making her even more miserable. Robert found the strain of these domestic matters intolerable and kept away as much as possible.
The family grew increasingly apart, and Sydney found himself taking a central role in managing inter-family communications, particularly about his mother’s illness and confinement, and he alone appeared to offer her some comfort.

Maintaining family relations
For a number of reasons, but especially because of the countess’ illness, the family’s early closeness dissipated through the 1830s. In a letter to Sydney, his sister Elizabeth lamented ‘the miserable, scattered state of our family’.
Their mother’s death in 1840, coming so soon after those of Robert and George, took away a unifying focal point for the family and reinforced the divided positions within the family.
For his part, Sydney, having taken on the role of family intermediary, remained on good terms with all his siblings, cousins and their children, until the mid-1840s or 1850s, and with most of them for the rest of his life.
He never had any quarrel with his older brother Robert, despite Robert being their father’s distinct favourite, and he maintained good relations with his sister, Caroline. After Caroline’s death in 1869, he stayed close to all her family and especially to her daughters, Alicia and Mary.
The earl’s ongoing opprobrium was reserved for this sister, Elizabeth and his next eldest brother, Charles Skeffington. The distance between the siblings derived mostly, as family quarrels do, from petty jealousies, differences in perspective, and divisions over money and inheritance.

About the author
Fiona Slevin grew up and went to school in Mohill and currently lives in Dublin. She recently published a new, expanded edition of her book, ‘By Hereditary Virtues: a history of Lough Rynn’, described by Brendan Kennelly as ‘a well-researched and beautifully written book; a marvellous read’, and by Prof. Michael L. O'Rourke, TCD as ‘the classic local history’. It is available at www.loughrynn.net for €15.