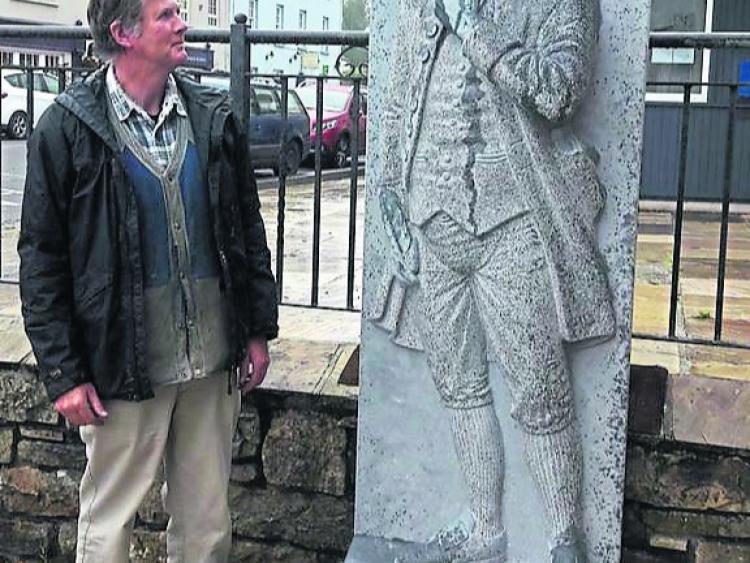 Saturday last was an historic day for Blacklion when a very impressive sculpture of locally and nationally renowned eighteenth century, Gaelic poet Cathal Buí MacGiolla Ghunna (circa 1680-1756) was erected near the Market House.

The Cathal Buí sculpture was crafted by Manorhamilton Sculptor, Seamus Dunbar and it was commissioned by Killinagh Community Council, who thanks to the generosity of late Parish Priest, Fr John O’Donnell, and Cavan County Council, funded it.

Commenting on Saturday’s erection of his Blacklion sculpture on his Facebook page, Seamus Dunbar remarked “the day finally arrived yesterday when I got to site my sculpture of the Gaelic poet Cathal Buí MacGiolla Ghunna.

“All went according to the carefully laid plans. We had set the base stone earlier in the week at the Market House, Blacklion, Co Cavan, so it was a relatively straightforward lift although he had to jump a fence and the site access was a bit restricted.

“Thanks to Michael McLoughlin and Mickey Fitzpatrick of Blacklion Community Development, and Mickey Fitz’s crew for the siting, and to McManus Leitrim Stone for loading up at the workshop and constant support throughout the carving process. Cathal Buí, the wandering bard, has come home to rest at last” a happy Seamus said in conclusion. Cathal Buí’s most famous poem An Bonán Buí (The Yellow Bittern) is based on Lough MacNean. He is buried in Donaghamoyne, Co Monaghan.